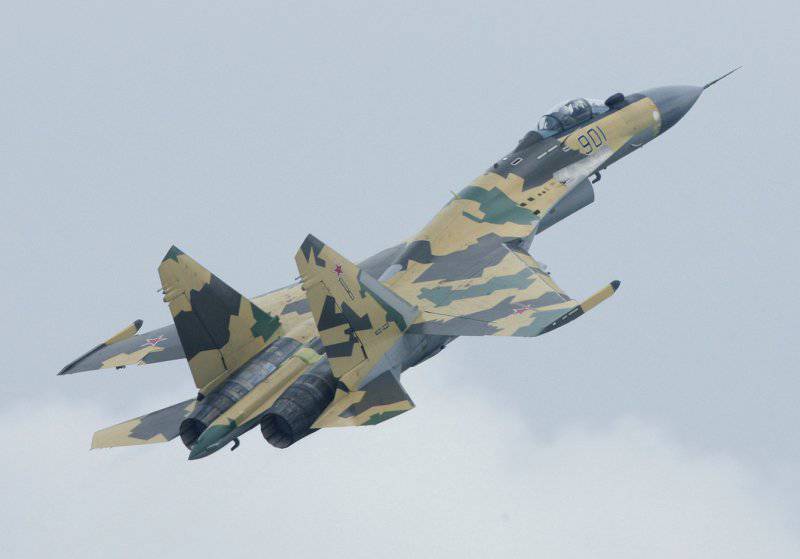 Is the most secretive American combat aircraft F-35 easy prey fighter Su-35? Some believe that this is a completely true statement, writes indrus.in 26 July.

In July, the 2008 was a simulation of air combat with the participation of the Su-35 fighter against a mixed fleet of American fighters - F-22, F / A-18 Super Hornet and F-35, where the latter was “battered like a child”. The simulation was conducted at the Hikam base of the US Air Force in Hawaii, which was witnessed by at least four representatives of the Air Force and Australian military intelligence. The deputy of the Australian Parliament, Dennis Jensen, knowingly said that in the course of “highly secret modeling”, the F-35 was “mercilessly beaten by the Su-35 fighter”.

Sukhoi company presents Su-35 as a fighter of the 4 ++ generation with some signs of the fifth generation, that is, with stealth characteristics. His ability to shoot down stealth planes is largely determined by super-maneuverability. Very expensive Western fighters are in the role of "plates" for rifle shooting.

The power plant Su-35 allows you to perform all kinds of difficult maneuvers, including the Pugachev Cobra, the Frolov Chakra and the unprecedented pancake (Pancake is a horizontal turn almost on the spot at 360 hail without a loss of speed — without the loss of speed doubtful statement - comment "VP").

Western analysts do not attach much importance to super-maneuverability, believing that in real combat operations, stealth is more important than super-maneuverability. Stealth is a parameter that stays with a fighter "anytime, any day." Northrop Grumman's business program manager Pete Bartos (Pete Bartos) says that stealth was a basic requirement for developing F-35 and therefore it does not need high maneuverability.

However, the authoritative military source Defense Industry Daily writes that "stealth is very useful, but this is not the Harry Potter invisibility cloak," after all. Indeed, the US Air Force stuck on stealth, while the theory of air combat is constantly evolving. “In 1940-1950's, the priorities were first the height, then the speed, the maneuver and the firepower. From the third and fourth generations of fighters, priorities shifted to speed, then maneuver, and finally, super-maneuverability. It’s like a knife in a soldier’s pocket, ”said Sergey Bogdan, chief test pilot of the Sukhoi Design Bureau, in an interview with Aviation Week.

Expert on aviation Bill Sweetman says the maneuvers that the Su-35 demonstrated at the Paris Air Show should not be mistaken for air superiority. “However, these maneuvers are not aerobatic tricks. An unpredictable flight path of a fighter can lead to malfunctions of the enemy missile guidance algorithms, the fighter itself can launch short-range missiles with a high probability of hitting an enemy aircraft, ”the expert says.

F-35 completely depends on its low profile and prefers not to get involved in a close air combat (“knife fight” - knife fight), where it will be very vulnerable from Su-35. Russian fighter possesses a large deadly arsenal weapons, increased flight range and, of course, the legendary super-maneuverability, which has become the hallmark of the Su-27 family.

Sergey Bogdan recalls that in 1989, the Su-27 performed the Cobra: “A quick change in speed can lead to a breakdown in tracking an enemy fighter’s Doppler radar. The maneuver is even more effective on the Su-35C, because after this maneuver the pilot can direct the aircraft in any direction. ”

Bill Sweetman says that the tactical advantage of doing a cobra is that any air-to-air missile has an “intellectual element” that predicts where the target will be after a while, but not in the case of a cobra. “If an enemy plane flies with an unpredictable trajectory and is able to change it unexpectedly and very sharply, without losing controllability, then it will be very difficult for the rocket to hit it,” the expert says. Vigorous maneuvers performed by the fighter, reduce the range of effective launch of enemy missiles, says Sweetman.

To destroy the Su-35, the F-35 fighter must come closer, thus putting it at risk of being detected (the powerful Su-35 radar can do it, especially since this aircraft has the most long-range air combat missiles with a range of 400 km developed by the company "Vympel", which is a world record - which rockets are meant, the source does not specify - comment "VP").

The expert also reports that the American tactics of air combat boils down to three principles - “first found, first shot, first destroyed”. With the advent of the Su-35, this tactic may be revised. F-35 may be the first to detect the Su-35, but for the use of missiles it must approach, and at this time both opponents will see each other. "In this case, the advantage of stealth is significantly reduced," says Sweetman.

In close combat, the Su-35С, with its uncanny ability to fly at minimum speeds and at the same time sharply accelerate to supersonic speeds, turns into a hunter. The maximum speed of the aircraft is 2,5M, the range of the flight is 3600 km, in the configuration of the air combat fighter, it can carry 12 medium-range missiles Vympel (probably mean R-77 RV of various modifications - comment “VP”). The F-35 fighter can carry only a handful of missiles, the range is only 2222 km, and its maximum speed 1,6М seems to speak only of the desire to "die as soon as possible."

In fact, the F-35 does not offer the “extravagant capabilities” that most Air Force countries of the world need. Conversely, the Su-35C offers efficiency on a par with fifth-generation fighter jets. Even worse, for the Western air force, it is the fact that they already see the vulnerability of the F-35 when it has not yet entered service, and after all, by the 2020-th year, there will be combat stealth fighters "Sukhoi" PAK FA. There is still enough time for the pilots of many Western fighters to change their profession to a different, safer career.

Ctrl Enter
Noticed oshЫbku Highlight text and press. Ctrl + Enter
We are
Situational analysis of the death of the MH17 flight (Malaysian Boeing 777), made on the basis of engineering analysis from 15.08.2014Air shield of the Green Continent. "Through hardship to the stars"
Military Reviewin Yandex News
Military Reviewin Google News
83 comments
Information
Dear reader, to leave comments on the publication, you must to register.