In St. Petersburg, everything is ready for the opening of the 6 International Maritime Defense Exhibition IMDS-2013 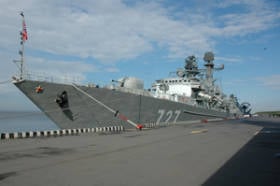 In St. Petersburg, everything is ready for the opening of the 6 International Maritime Defense Exhibition IMDS-2013, which will be held from 3 to 7 in July. ARMS-TASS correspondent was informed about this today by the Marine Salon CJSC, which is the organizer of this world review of the latest achievements in the field of naval technology.


This year, the naval salon in St. Petersburg, which is the only one in our country, is 10 years old. According to the main indicators, the IMDS has already outstripped the majority of overseas marine salons and today it surely occupies a place in the top three leading international naval exhibitions.

As explained in the Marine Salon, the main purpose of the IMDS is to promote the development of business contacts of Russian defense-industrial complex enterprises with foreign colleagues, to establish international industrial cooperation in creating samples of weapons and military equipment.

The location of the exhibition areas near the Gulf of Finland allows organizing an MVMS exhibition in pavilions and moorings in a single space with the possibility of demonstrating existing ships and vessels, navigating and maneuvering qualities of watercraft, and also show offshore artillery systems in action practically within the city limits.

A single exhibition space favorably distinguishes IMDS from other world leading salons (for example, Euronaval in Paris or IMDEX Asia in Singapore), where exhibits and ships are located far away from each other.

2011 exhibitors from 409 countries, including a foreign company 30, took part in the previous show of MVMS-71. Among the participants were all the leading enterprises of the maritime industry in Russia. The official delegation from 2011 countries and 91 business delegations from 68 countries arrived at IMDS-113.

The number of foreign delegations increased significantly, their “geography” and representativeness expanded, which clearly demonstrates the increasing authority of the Salon and interest in the IMDS project as a whole. Over 5 days of work, thousands of specialists took part in IMDS-2011 events.

As part of the demonstration section of IMDS-2011, 35 warships, boats and ships, including three foreign ones, as well as naval artillery systems and small weapon.

Specialists appreciated the IMDS congress and business section, which consisted of 26 core events, including four international scientific conferences, as well as a retreat of the NATO Navy Main Arms Group.

One of the most interesting events of the Salon was a visit to the enterprises of the military-industrial complex.

The exposition of the Salon will be located in four pavilions and in open spaces of the Lenexpo exhibition complex. To date, about 400 participants have been registered, including all the largest corporations and enterprises of the Russian defense industry complex specializing in the field of naval technology. The salon will feature the national pavilions of Germany and France.

16 warships, boats and ships from the Russian Defense Ministry and the Border Guard Service of the Federal Security Service of the Russian Federation, as well as foreign naval ships from Germany and Poland will be represented at the berths of the Marine Station of St. Petersburg. The participants of IMDS-2013 will present speedboats and vessels with their placement in the water area adjacent to the exhibition complex at the floating and yacht berths. Holding "Helicopters of Russia" are preparing for the demonstration in open areas four helicopters from the Navy of Russia. Concern Morinformsystem-Agat plans to present at the Salon a mobile coastal missile system "BAL-E" and container complex of missile weapons "Сlub-K". Naval artillery systems and small arms will be on display at the Russian Defense Ministry’s "Rzhevka" training ground for official foreign delegations and media representatives.

The congress and business section of the IMDS-2013 includes four international scientific and practical conferences, including: NSN'2013 - the seventh International Conference on Shipbuilding "The Navy and Shipbuilding in Modern Conditions" (organized by FSUE "Krylov State Research Center") ;

Traditionally, in the framework of the IMDS-2013, demonstration flights of aerobatic teams "Russian Knights" and "Swifts" are planned. With the support of the St. Petersburg Sailing Union, two traditionally-made sailing regattas for the prize of the International Naval Show of the IMDS-2013 will be held: the sailing regatta of cruising yachts and the children's regatta.