27 2013 June
35
In any war, the howling parties capture various trophies. It was the same with various aircraft during the Second World War. The enemy technique, found or captured, was carefully and meticulously studied, subjected to various tests. Howling parties tried to find each other's strengths and weaknesses, the most vulnerable places in the aircraft. The captured aircraft was a particularly valuable trophy - after all, they could be used to train pilots and to conduct all sorts of sabotage operations.


One of the German achievements of the Second World War was the creation of the so-called “Rosary's wandering circus”. Under such a rather strange name, a squadron was hidden, in which all the captured Allied fighter planes that the Germans managed to find whole or slightly damaged were gathered. This "circus" moved from one military unit to another along the entire Eastern and Western Front in order to acquaint the German pilots with allied equipment. Leading pilots could independently fly on captured enemy aircraft, evaluate their combat and flight qualities. Thanks to this, the “traveling rosary circus” brought great benefit to Germany.

It so happened that all captured Allied fighters were transferred to the Rosary circus. Officially, this unit was called the 2 Squadron of the experimental center of the Luftwaffe High Command, commanded by an experienced test pilot, captain T. Rosarius, it was his name that was assigned to the unit. Originally, the circus was stationed in Göttingen. The main task of the Rosarius unit was to fly over the captured fighters, thoroughly study their shortcomings and merits, and develop the best tactics to combat them. All planes that got into the squadron were repainted. The fighters usually depicted a full set of Luftwaffe designations, including swastikas located on the vertical tail. 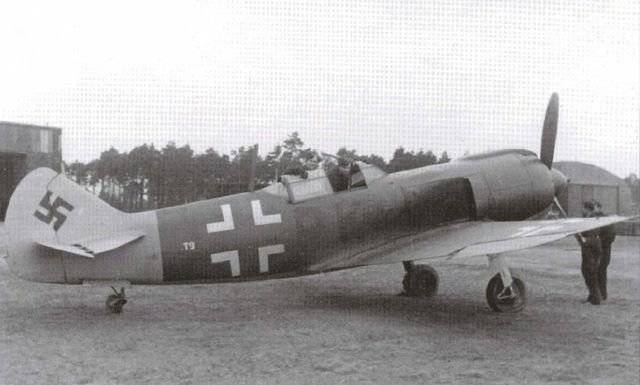 Captured LA-5FN
The "Rosarius Mobile Circus" flew its planes to combat units, conducted their demonstration on the ground and in the air, and organized training battles. Experienced German pilots were carefully instructed and made it possible to fly on enemy fighters themselves. Interestingly, the Germans gave American fighters the opportunity to meet their allies - the Hungarians. In April 1945, when American troops approached Göttingen, the circus relocated away - to the Schwangau airfield. Towards the end of World War II in the collection aviation There were 4 Mustang fighters, 3 Spitfire fighters (all different), 3 Thunderbolts, two Tempest, Typhoon and Mosquito, as well as a training Harvard and 3 Soviet fighters. among which were LaGG-3, Yak-3 and Yak-9.

The idea of ​​forming special units that would be armed with trophy aviation equipment or equipment of a potential enemy, is not something new, emerged during the Second World War. It is clear that any aircraft (gun, tank, ship), turned out to be on the other side of the front, first of all becomes the object of close attention of the designers and scientists of the enemy. However, the fate of the captured trophy depends on its combat characteristics. For example, during the First World War, the Germans managed to copy and start mass production of the successful French fighter Newport-11, and the German reconnaissance Albatros in turn in the Russian Empire became the Swan.

Having defeated the French army in blitzkrieg 1940 of the year, the same Germans successfully solved the problem of combat training aircraft, confiscating for this purpose the equipment of the defeated enemy. Later, during the Second World War, the aircraft of all the warring states began to fall into the hands of the Luftwaffe testers in more or less significant quantities. Over time, a decent collection of British, Soviet and American aircraft accumulated in Germany. So, for example, the heavy allied four-engined bombers of the Allies (mainly the remarkable American B-17 Flying Fort and B-24 Liberator) were Germanized into a special squadron, which was designated Kampfgeschwader-200. The command of the 200 squadron was carried out by an experienced master of airborne special operations, Lieutenant Colonel Theodore Rovel. This squadron performed a variety of tasks, including long-distance reconnaissance and agent delivery to North Africa and the British Isles. 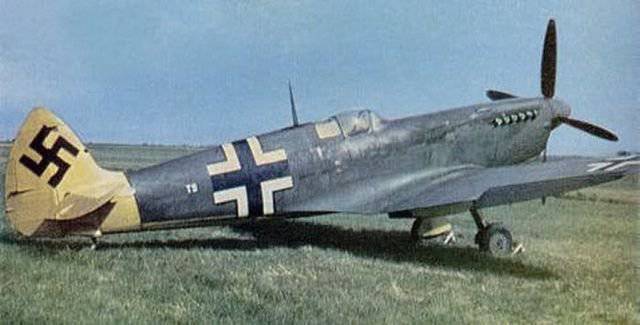 Captured English Spitfire
With fighters in Germany did a little differently. After conducting meticulous tests and removing all flight performance, fighter jets flying to 1943 were handed over to the test special unit of Versuchsverband der OKL, which received great fame as the Rozarius Wandering Circus. This unit was engaged in the demonstration of Allied fighters to German pilots. At various times, all the most dangerous air "predators" of the Allied forces were present in the "circus". It had a complete "zoo" of Anglo-American fighters, and at the end of the war it was supplemented by Soviet Yak-3 and La-5FN. Wandering around the airfields, the circus performers allowed the Luftwaffe pilots to train in aerial combat in field conditions. Something like a duel on real, albeit blunted blades.

The four-engine Allied heavy bombers, which had been consolidated by the Germans into a special Kampfgeschwader-200 air squadron, was held in the Luftwaffe under the designation DO-200. The aircraft received such a name, because their repair and the supply of components for them, as well as the replacement of small arms by more powerful Dornier company. By the middle of the 1944, the Luftwaffe already had an order of 40 fully staffed and technically sound captured by American bombers.

In essence, these were the first to stories "Ganships". Aircraft from the 200 squadron served as reconnaissance aircraft, bombers, took part in training and training of air defense forces, but most often they were used as fighters, "ganships." Very often, the emblems, markings and identification marks from the trophies were not removed, but only slightly corrected. The tactics of these planes' actions were as follows: either with sufficient cloud cover, the DO-200 aircraft carefully emerged from behind the clouds and attached to the American B-17 formation, after which, at the command of powerful rifle guns, they began to destroy them systematically; or DO-200 pretended to be shot down planes, special smoke bombs were lit on board, the 1 engine was turned off, etc., then they were taken under 4-6 B-17 bombers, which either became easy prey for Luftwaffe air defense fighters, or were also shot by DO -200. 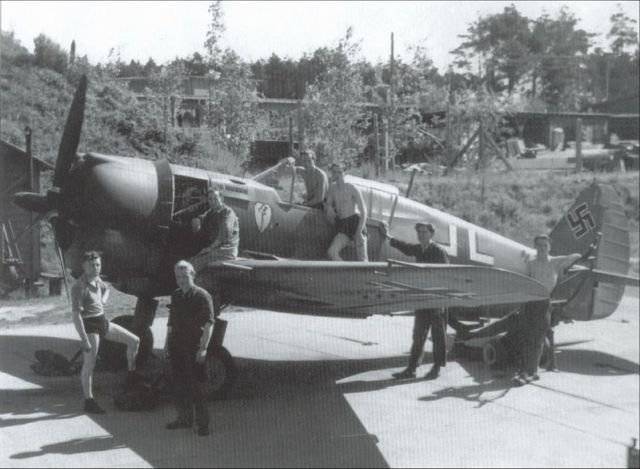 Captured American P-47
After a series of similar incidents in the USAAF, very tough directives were given that instructed the crews of the “flying fortresses” to open fire on all that are attached B-17, if it was impossible to exclude their “German” origin. Often this led to the fact that the American pilots opened fire on their own planes, knocking them down and damaging them. A similar situation was repeated with B-24, although the Luftwaffe armed with them was much less.

If we talk about the USSR, then it can be noted that in the Soviet Union, the enemy equipment was subjected to detailed study. The first Messerschmitt-109 fighter in the USSR entered from Spain in 1938, and from there the newest at the time German bomber Heinkel-111 was delivered to our country. At the pre-war time, as well as during the war, the Air Force Flight Test Institute of the Air Force, located in Zhukovsky near Moscow, was visited by aircraft of the main types of almost all belligerent states. But the experience gained from studying them was mostly used in industry.

Of course, when enemy planes were captured at the front, they were studied by pilots on the spot, sometimes even reconnaissance flights or air battles were made, but such events were of a single character. At best, Soviet pilots received generalized instructions and recommendations on how to combat one or another enemy aircraft. In this regard, the German Rosary Wandering Circus, as well as the special 200 squadron, were truly unique units.