27 2013 June
27
There will always be a demand for self-loading rifles, which have relatively high accuracy and use common ammunition. It seems that an infinite number of such samples have already been created, but they all appear and appear, and they do not differ in principle from their predecessors. So, as a matter of fact, nothing supernova appears and everything is maintained only through advertising, although sometimes interesting samples come across, but this is rare. In this article we will try to get acquainted with the next variation of the sniper rifle based on AR-10 under the cartridges 7,62х51, but with some differences and modifications. 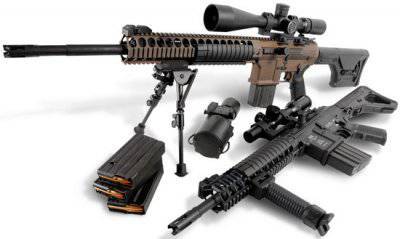 Another series of sniper rifles appeared in 2010, thanks to the work of LWRC International. Weapon It received the name Rapid Engagement Precision Rifle, which can be translated as a “quick-fire precision rifle” or something like that, abbreviated as REPR. Weapons immediately released in three versions: Sniper, DMR and Standart. They differ only in barrel lengths, although many also note the difference in buttstocks, but the butt can be installed any, regardless of the modification of the weapon. So, the Sniper variant is a millimeter 1029-1054 rifle with a millimeter 508 barrel length. This is the most long-barreled and most difficult version of the weapon, therefore, the most accurate, which is reflected in the name. The weight of the rifle without ammunition is kilogram 5,11. DMR variant (Designated Marksman Rifle) It has a barrel length of 457 millimeters, with a total length of 978-1041 rifle millimeter, and a weight equal to 4,76 kilogram. The Standard version of the weapon is the shortest, its overall length is 952-1036 millimeters with a barrel length 409 millimeters, and the weight is equal to 4,31 kilograms. Also option Standart can be equipped with a shorter barrel length 323 millimeter, respectively, the total length of the weapon and its weight will be even smaller. All variants of rifles are powered by detachable magazines with 5,10 or 20 ammo capacity.

As is clear from what is written above, the total length of the weapon can vary within fairly large limits, which allows the rifle to be adjusted to fit a particular shooter. This adjustment is achieved with the help of buttstocks, which can be of various designs, including one that does not allow adjustment of the butt even in length. Among the various options of butts there are those that are regulated stepwise, smoothly, have adjustment of the cheek support, and even those that have a “third leg” under the butt. In general, due to the fact that a lot of stock options were produced for the AR rifle family, in this case a huge variety can be observed. If we talk about the appearance and ergonomics of the weapon, then it becomes immediately clear who is the progenitor of these rifles, even there is no reason to guess. But there are differences. First of all, the cocking handle, located on the left side of the weapon in the form of a rather large grooved cylinder, catches the eye.

The tilt angle of the handle was also changed, and the handle itself received replaceable rear parts for adaptation to the size of the hand arrow. The forearm of the weapon is an octahedron, the upper face of which is made of a non-removable mounting bar, which is a continuation of the mounting bar on the receiver. Thus, there is enough space for an optical sight and night sight. The side and bottom faces have holes for mounting additional “picatinny” planks. It is noteworthy that, complete with a weapon, there are open aiming devices consisting of a front sight and a diopter pillar. These sights are mounted on the upper mounting bar and can be folded, which allows not to remove them when using an optical sight. So, if the optical sight fails, then it can simply be removed and immediately continue using the weapon, albeit at shorter distances. Standard bipods are also attached to the mounting bracket type "picatinny", but on the bottom. True, instead of the mounting strap, you can install other options for bipod mounting, so that there can also be achieved a certain variety. Standard bipod folding and adjustable in length.

Unlike the AR-10 and AR-15, the automatic rifles are built according to a scheme with removal of powder gases from the bore with a short piston stroke. An interesting and most important feature was that the weapon has two modes, self-loading and manual reloading. These modes are controlled by a fuse switch, which has three positions - the above two and the inclusion of a fuse. Actually the fact that the automatic weapon has the ability to disable, and quite convenient and fast and makes this series of rifles interesting. Of course, in other models, it is possible to lock the gas exhaust unit to eliminate the impact of moving parts on the accuracy of fire, but in few places it is implemented just as conveniently as here, and sometimes even an ordinary rifle itself requires one accurate shot, which does not allow automatic to do. 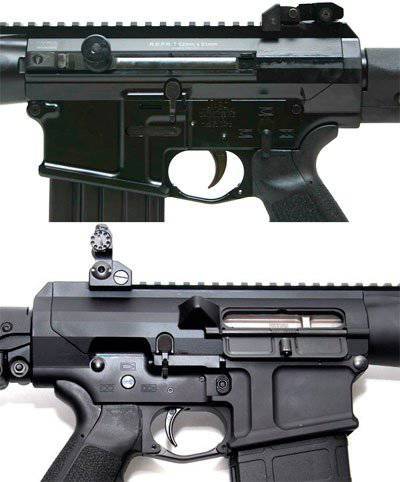