Journalist Alexei Pushkov: We are witnessing the beginning of the sunset of the USA 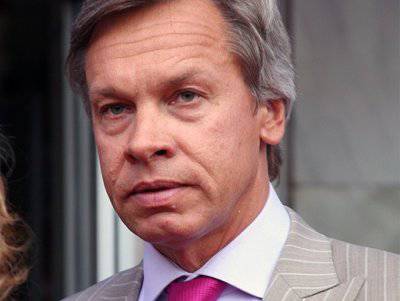 “Russia no longer claims the role of a global power No. XXUMX, but it no longer intends to play up to the United States,” says Alexei Pushkov, a well-known TV host and politician
The author's analytical program “PostScript”, which he has been leading on the TVC channel, is 15 (!) Years old. And for the past year and a half, Alexey Pushkov has been doing this, already being the chairman of one of the key committees of the State Duma - on international affairs.

A.P .: - Of course, I do not use secret documents in the program. But the circle of communication has certainly expanded, there are more contacts with people who make decisions ... Recently, I visited Baku and met with President Aliyev. And before that there were meetings with the President of Finland, the foreign ministers of a number of states. The fact that I head the Russian delegation to the PACE gives a very accurate sense of the ideological nerve of European politics. When you fish, it is better to keep your hand on the fishing line - you immediately feel the fish.

AiF: - What, in your opinion, has changed in these countries and the world over these 15 years?

A.P .: - When I started to post “Postscript”, it was the 98 year. This was the end of the Yeltsin era, when the president almost no longer led the country, many issues were solved by people who were not authorized to do so in a narrow circle. And the leitmotif of my program was that I had to leave Yeltsinism. I believed that this system leads to the disintegration of the country, to the weakness of its international positions, to the fact that we are constantly losing ground. Recall, at least, our monstrous position on Yugoslavia: we actually gave the go-ahead to the destruction of this country. Another thing is that we were too weak to resist the West. Since then, much has changed. Although I believe that we did not quite break up with the Yeltsin era: oligarchy, the oil and gas character of our economy is a legacy of that time. But still we live in another country. If we talk about foreign policy, Russia has established itself as one of the poles of the modern world. Yes, we do not claim, as the USSR, the role of global power number 1. But this is correct: such claims always lead to an over-exertion of forces, to what the Americans call "over-expansion", an excessive expansion of obligations. US debt in 16 trillion dollars - above their GDP! - the result of this. They have too many commitments around the world, including the military: most of the funding for NATO comes from the States. And, by the way, Paul Kennedy, a professor at Yale University, proved that it was the overvoltage of forces that caused the fall of all the great powers: Spain, France, Germany ...

I believe that we are witnessing the beginning of the sunset of the United States, which can last several decades. America does not cope with the role of superpower, losing control over global processes. And Russia, on the contrary, is being restored and becomes a point of attraction for very many. We do not want to agree on what we agreed to before. Three times they vetoed attempts to make Syria second Libya. Now the Kremlin has declared that we are ready to consider the question of granting asylum to Edward Snowden (who exposed the top-secret program of the US intelligence). How will this be perceived by Washington? Of course, negative. The man gave out top-secret information, and Russia is ready to shelter him! Ten years ago this was impossible.

"AIF": - You are talking about the overvoltage of US forces. And Russia is not overstrained? Take, for example, plans to re-equip our army with 20 trillion rubles ...

AP: - We have not yet approached the surge. In contrast to the USA and the USSR, we even have practically no military bases anywhere. In recent years, the States have fought 4 wars: Yugoslavia, Iraq (this war alone cost several trillion dollars, and the costs are still there: troops are formally withdrawn, but 50 troops continue to work there under contract), Afghanistan and Libya. During this time, we had only one military conflict - with Georgia. But the Russian leadership did not take over Tbilisi and establish another power in Georgia. Although technically it was not a question: 2 hours - and Tanks in Tbilisi ... We did not follow the path of expanding military-political obligations. We are cooperating with NATO on some programs in Afghanistan - pilot training, transit, but our troops are not there. For 20 years, our peacekeepers have been only in South Ossetia, Abkhazia and Kosovo. And now we are considering the possibility of sending 300 peacekeepers to the Golan Heights. This, again, is not a burden on the budget. I believe that we are very balanced, restrained. Although there is a category of the population - 15-20%, which wants foreign policy to be tougher, so that we are more respected and feared.

"AIF": - According to your estimates, how will the conflict develop in Syria?

AP: - A bloody balance has been established in the country: the government of Bashar al-Assad controls 75-80% of the country, the rest is the rebels. There are camps in Jordan where American instructors teach militants. And in Turkey there are CIA officers who are engaged in the distribution armory streams. The militants make raids from these territories, but they are clearly unable to overthrow the regime. Of those who have been critical of the president, many fear militants more than Assad. For all his shortcomings, the main religious and ethnic communities of Syria lived in peace with him - Shiites, Sunnis, Christians, Druze, Kurds ... And the people who are trying to seize Damascus carry the ideology of radical Islam. They have a slogan: "Shiites - to the cemetery, Christians - to Beirut!" And there are 2 million Christians in Syria ...

AiF: - You mentioned the “nerve” of European politics. There is a feeling that this nerve is now bruised somewhere below the belt. The euro crisis has faded into the background, but everyone is discussing the legalization of same-sex marriages ...

AP: - In France, 200, thousands of people who want to live in same-sex marriages, have imposed their agenda on the whole nation, splitting society. Now in the UK, in Germany, such marriages will also be recognized. And it worries me that soon these innovations can be declared of common European value, which Europe is ready to implant with the confidence of the Crusaders ... In Azerbaijan, for example, they say that such a path is unthinkable for them. But Azerbaijan (like Russia, by the way) is a member of the Council of Europe. And who said that in the Council of Europe they will not say once: we cannot discriminate against sexual minorities in any European country! I am afraid that politicians themselves do not really understand where their people will lead with such a one-sided “same-sex” policy ...

Ctrl Enter
Noticed a mistake Highlight text and press. Ctrl + Enter
We are
Brussels deadlockA great interview with Sergey Lavrov: about Ukraine, Obama and Iran
79 comments
Information
Dear reader, to leave comments on the publication, you must to register.