The world's only hand-to-hand fight of people and dogs against fascists. 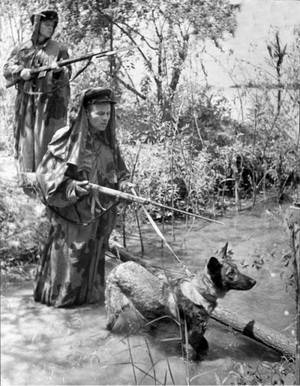 In Cherkasy region, there is a unique monument to 150 border dogs, who “tore up” a regiment of fascists in hand-to-hand combat. This is the only history world wars and conflicts the battle of people and dogs occurred in the very center of Ukraine many years ago, and it was like that ... It was the third month of the war, more precisely, it just started when in late July events occurred that for the first time changed the course of the Great Patriotic War, or the whole the course of the Eastern Company, as the war was called at Hitler’s headquarters. Few people know that according to his order, by August 3 Kiev should have fallen, and on 8 number, Hitler himself was going to come to the “victory parade” in the capital of Ukraine, but Hitler, Italy’s leader and Slovak dictator Tiso, was going to come to Ukraine.


It was not possible to take Kiev to the "forehead", and an order came in to go around it from the south ... Thus, the terrible word "Green Brahma" appeared in human rumor, an area not indicated on any maps of the great battles of the Great War. This wooded and hilly massif on the right bank of the Sinyukh River, near the Podvysokoye villages in the Novoarkhangelsky district of Kirovohradshchyna and Legezino of the Talne district of Cherkasy region, is only known today as one of the most tragic events of the first months of the Great Patriotic War. And even so, thanks to the fact that the participant of the fierce battles during the Uman defensive operation was the famous songwriter Yevgeny Aronovich Dolmatovsky.

With the release of his book "Green Brahma" (full format) in 1985, the secret of the "Green Brahma" was revealed ... In these places, the 6-I and 12-I armies of the South were almost completely destroyed -West front generals Muzychenko and Ponedelin. By the beginning of August, they numbered 130 thousands of people, 11 thousands of soldiers and officers, mostly from their rear units, left Brahma. The rest either were captured, or remained forever in the tract of Green Brama ...

In a separate battalion of the border guard detachment of the rear of the South-Western Front, which was created on the basis of the Separate Kolomiya border commandant's office and the border detachment of the same name, with heavy fighting retreating from the border, there were service dogs. Together with the fighters of the border detachment, they bravely endured all the harsh times. The commander of the battalion, he is the deputy chief of staff of the Kolomiya frontier detachment, Major Lopatin (according to other data, Major Filippov commanded a consolidated detachment), despite the extremely poor conditions of detention, the lack of proper food, and the command to release the dogs, did not. At the village of Legedzino, the battalion, covering the withdrawal of the headquarters units of the command of the Umansk army group, took its last battle on July 30 ... The forces were too unequal: against half a thousand border guards of the fascist regiment. And at a critical moment, when the Germans went to the next attack, Major Lopatin gave the order to send hand-to-hand combat with the fascists of the border guards and service dogs. It was the last reserve.

The sight was terrible: 150 (various data - from 115 to 150 border dogs, including those from the Lviv frontier school of official dog breeding) trained, half-starved shepherd dogs, against the Nazis watering them with automatic fire. Shepherds dug into the throats of the Nazis, even in death cramps. The enemy, literally bitten and chopped with bayonets, retreated, but came to the rescue Tanks. Bite German infantry, with lacerations, with screams of horror, jumped on the armor of tanks and shot the poor dogs. In this battle, all 500 border guards were killed, not one of them surrendered. And the surviving dogs, according to eyewitnesses - residents of the village of Legedzino, remained faithful to their guides to the end. Each of those who survived in that meat grinder lay down near her master and didn’t let anyone near him. German animals shot every shepherd, and those who weren’t shot by the Germans refused food and died of starvation on the field ... Even rural dogs got it - Germans shot large dogs of the villagers, even those who were on a leash. Only one shepherd was able to crawl to the hut and fell at the door.

A devotee four-legged friend was sheltered, went out, and by a collar on it, the villagers learned that these were the border dogs not only of the Kolomi border guards, but also of the special school of service dog breeding of captain M.Ye. Kozlov. After the battle, when the Germans gathered their dead, according to the recollections of the villagers (unfortunately already few remaining in this world), it was allowed to bury the Soviet border guards. Everyone who was found gathered in the center of the field and buried, along with their faithful four-legged assistants, and hid the secret of the burial for many years ... The researcher of that memorable battle, Alexander Fuka, said that the memory of the heroism of the border guards and their assistants among the villagers was so great that, despite the presence of the German occupation administration and a squad of policemen, half of the village boys wore green hats of the dead with pride. And the local residents who were buried by the border guards, hiding from the fascists, tore out photographs of the dead from the Red Army books and officers' certificates, and then send them for identification (it was not possible to store such documents as a mortal danger, therefore it was not possible to establish the names of the heroes). And the planned triumphal meeting between Hitler and Mussolini took place on August 18, but, of course, not in Kiev, but there, at Legedzino, on that goal, which led up to Talny and which the Soviet border guards held as their border.

Only in 1955-m, the inhabitants of Legedzino were able to collect the remains of almost all 500 border guards and transfer them to the village school, near which lies the mass grave. And on the outskirts of the village, where the only hand-to-hand fight of people and dogs against the fascists took place, on May 9, with the voluntary donations of veterans of the Great Patriotic War, border troops and dog handlers of Ukraine, the world's only monument to a man with a gun and his faithful friend - dog. There is no such monument anywhere else. “Stop and bow. Here in July, 2003, the fighters of the separate Kolomyisk border commandant's office went up to the last attack on the enemy. The 1941 border guards and the 500 of their service dogs are killed by the brave in that battle. They remained forever faithful to the oath, the native land. ” Today, only two dead border guards are known.

Ctrl Enter
Noticed oshЫbku Highlight text and press. Ctrl + Enter
We are
From assassination to execution. The path to the death of Benito MussoliniThe tragedy and prowess of the Green Brahma. Colonel Danilov - Unknown Hero of the Great Patriotic
Military Reviewin Yandex News
Military Reviewin Google News
112 comments
Information
Dear reader, to leave comments on the publication, you must to register.