The last day of "Satan" 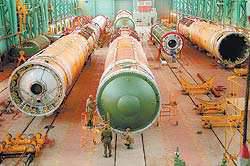 US President Barack Obama offered his Russian counterpart Vladimir Putin to reduce the nuclear potential of both countries by another third. And it is precisely this topic - the race of disarmament - that Vladimir MASHATIN dedicated his “photo report from the past”. A reporter from New Izvestia offers his subjective view of the “Objective history"The destruction of the most powerful and formidable weapons on Earth - the Soviet intercontinental ballistic missile "Satan". The reprisal of the nuclear "Satan" took place twenty years ago on the secret base of the disposal of heavy Surovatikha missiles.


The architectural features of Kirpichnaya Street, the main and only "Avenue" of the village of Surovatikha, have always surprised both visiting relatives of villagers and rare American guests of the village - military observers from the USA. At times, it seemed that among the swamps and forests, unknown designers created a large-scale art project at Kirpichnaya, dedicated to the Cold War era. Missile parts were guessed in rural fences and sheds, gates and stainless steel sheds. Of the remnants of nuclear weapons, the aborigines made quite peaceful elements of house cladding, television antennas and garbage bins.

The “nuclear shield” was used by locals to build spacious garages and home pools. The peasants were silent as partisans, refusing to explain why the fungi above the children's sandboxes were made from the nose of strategic missiles, and the builders mounted the fountain bowl in the village square from the intercontinental container plugs and the parts of the launch shaft. But 20 years ago, looking into Surovatikhu by a special pass and a travel certificate for the Izvestia newspaper, I knew exactly why cosmic material stronger than metal, a miracle material based on fiberglass and epoxy impregnation, served as the main building material for each compound. 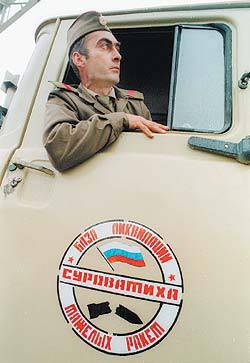 At the height of the Cold War, the forest drowsiness and the impassability of the swamps of the Gorky region helped the military to create on the outskirts of the village of Surovatiha a super secret nuclear arsenal of the Soviet Union. This arsenal was intended for the storage and assembly of rocket armament and its delivery to the troops. In the second half of the 50's, the famous "seven" was assembled here - the P-7 rocket, on which Yuri Gagarin flew around the globe.

Having made rockets a hundred years in advance, the presidents of the superpowers became thoughtful and began to sign the disarmament treaties with a bang. 25 years ago entered into force the indefinite Treaty on the Elimination of Medium and Small-Range Missiles. Leaders of the USSR and the United States, Mikhail Gorbachev and Ronald Reagan, pledged to destroy all launchers and ground-based missiles with a range from 500 to 5500 km. The final verdict to the Soviet intercontinental missiles RS-20 and PC-16 was announced 20 years ago by Boris Yeltsin and George Bush when they signed the Strategic Offensive Reductions Treaty (START-2). So in the 90-s in the territory of the Arsenal of the Strategic Missile Forces, a new secret object appeared - the base for the elimination of Surovatiha heavy missiles. Here they began to destroy the most powerful and formidable weapon on the planet - the nuclear ballistic missiles RS-20, known in the West as SS-18 "SATAN", or "Black Satan". 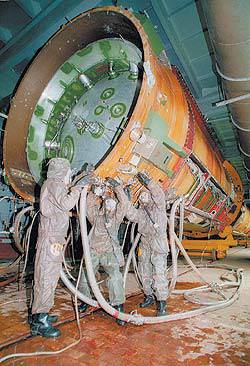 The G-20s were 36 meters in length and 3 meters in diameter with 211 tons each. There were no analogues to this rocket in the whole world. The largest US missile "MX" weighed "only" 88 tons.

"Satan" was equipped with a fluid engine, which allowed her to reach any point of our planet and even go into space. These weapons of mass destruction bore not only ten megaton-class separable nuclear warheads, but also false warheads that "defended" the main nuclear units. 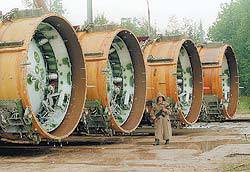 Such "monsters" of the USSR nashtamped 308 pieces. PC-20 is still in the ranks of the Strategic Missile Forces and are waiting for their "time H" in underground mines scattered throughout Russia. Everything is simple and clear - while the PC-20 are on alert, Russia is superior in nuclear power to the United States.

There are three ways to eliminate missiles. The first is disabling launchers using the blasting method. The second is the launch of a rocket without a warhead into a given area. The third is the complete dismantling of the rocket and its subsequent destruction. On the basis of "Surovatikha" said goodbye to "Satan" by the third method of elimination. The missile was considered destroyed if it was freed from fuel, removed from the transport and launch container and cut into pieces. PC-20 came from the parts already "dry", with the fuel drained, but often in each of them it was rattling from 10 to 200 l heptyl. 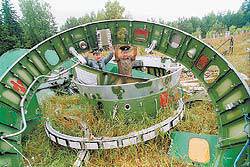 Exactly 20 years ago, the foot of a photojournalist set foot on the territory of a secret arsenal for the first time. I received a special pass in Moscow for a long time, as a tourist visa, only to a non-existent state. The unprepared civilian was immediately struck by the Gulliver scale of the workshops, where the dismemberment of giant, silver-casting and pre-decapitated carcasses of rockets occurred. Exercises and training of officers to neutralize rocket fuel were held daily. Therefore, the most truthfully I managed to photograph the “evaporation” of heptyl by calculating the rocket men in chemical protection suits. Military units "steamed" with each rocket for 10 – 20 days, neutralizing the remnants of the most toxic fuel in the world.

From a single sawn “Satan”, 4 kg of pure gold and more than 100 kg of silver were mined at disposal. The open area of ​​the base for the elimination of ballistic missiles was the size of two football fields, which were filled with cylinders SS-18 and SS-17. Between them, on the special routes, the dwarf figurines of machine gunners, sentries, were moving harshly and unhurriedly. The rest of the territory was littered with the remains of monster rockets. Poured "Zone" Strugatsky, a real space dump on Earth! The stalker officers were busy snooping around her, ignoring the journalist.

Through the efforts of partners in the negotiations, “Satan” was recorded for destruction as 1. The Yankees did not stint and generously paid all the costs of cutting the PC-20. From the States, even loads of food came to the Surovatikha base. During the 15 years, millions of American years regularly underwent modernization and reconstruction of the complex for utilization of liquid ballistic missiles, which provided for a constant increase in capacity.

In this remote place of the Nizhny Novgorod region, the US military has often not been out of love for the harsh and wild nature. According to an international memorandum, American experts controlled each stage of the transformation of a formidable weapon into scrap metal.

How did the military treat this disarmament race? I remember the sign in the office of psychological unloading of the guard battalion: “Missiles that DO NOT HAVE SCALE are destroyed on the spot”.