The Russian fleet is learning. To cruise "Moscow" to Cuba 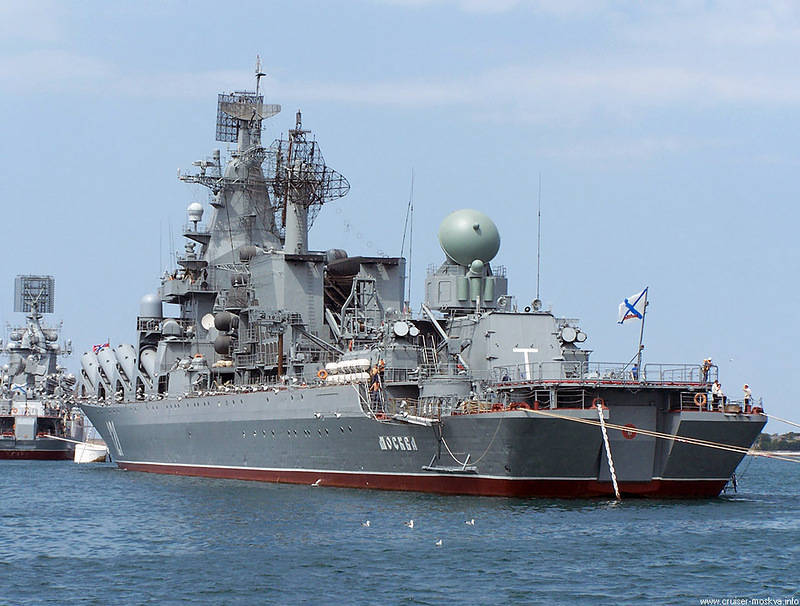 Guards missile cruiser "Moscow" is preparing for a long campaign. He will become the flagship of the combined detachment of the ships of the Black Sea (Black Sea Fleet), Baltic (BF) and Northern (SF) fleets, which will conduct exercises in the Atlantic Ocean in July. In the course of the exercises, a number of combat training tasks will be worked out to combat the surface, underwater and air enemies, and to interact with the strategic aviation Air Force and Submarines of the North fleet. During the exercises in the Atlantic, ships will perform rocket and artillery firing. And the cruiser Moscow will use its main strike weapon - supersonic anti-ship missiles "Vulkan". After the exercises, a detachment of ships will visit Cuba and Venezuela in order to strengthen cooperation with the Navy of the Latin American countries.


The inter-fleet grouping will include the BOD of the Northern Fleet, Vice-Admiral Kulakov, the patrol ship of the Baltic Fleet, Yaroslav the Wise, and several auxiliary vessels. It will be formed in early July in the western part of the Mediterranean Sea, where the cruiser "Moscow" will join the detachment of the ships of the Northern Fleet and the Baltic Fleet. The deputy commander of the Black Sea Fleet, Rear Admiral Valery Kulikov, will lead the campaign.

The aim of the campaign should be considered the accumulation of experience in the performance of combat services in remote areas of the oceans and the demonstration of the flag of St. Andrew. This campaign is quite an important event for our fleet. Why? Let's try to figure it out.

It is no secret that the fleet is now faced with the task of returning its presence to significant areas of the oceans. This is not the task of one day and not one campaign. It is impossible to return our fleet to the oceans with orders and directives. This is a big and long job. To accomplish this task, a serious and ambitious program for the construction of new ships is being implemented. To accomplish this task, the crews are studying in constant campaigns and exercises. After all, if we imagine that, by magic, we instantly received hundreds of new warships, it would still take years to learn how to act in near and remote areas to get acquainted with a potential enemy, with its capabilities and tactics; to build up their tactics and gain experience in the use of military force that had fallen from the sky. Miracles do not happen. And in order to operate successfully in the ocean tomorrow, we must learn today.

Of course, the strength of our fleet is now largely limited. And therefore it makes no sense to compare the forces of the detachment of our ships with the forces of the current "masters of the Atlantic." It makes no sense to imagine a hypothetical collision with the combined NATO Navy. We are not going to fight there. And do not even scare anyone. We are going to study.

But why do we need it at all? Why do we need a presence in the oceans? Often, one is confronted with skepticism about the very need for the development of the Navy and the need for its presence in remote areas of the World Ocean. There is a range of opinions, from “where to us to be caught ...” (with the indispensable example of Tsushima, as if our fleet only participated in this battle) and to “we are not a sea power at all”. We often hear mockery at the task of displaying a flag, they say, “we only inflate our cheeks”. Basically, such opinions come from the lack of understanding of the importance of sea power for the development of the state and from ignorance of the place and role of the fleet in the world balance of military forces.

To understand why we need a fleet and what it needs in the ocean, we will have to start with the fact that the land occupies only 29,2% of the Earth’s surface. And the military fleet (any military fleet) is at the same time both a means of extending military force beyond land and a defense of land against attack from the sea. And to solve both of these tasks, the 130 to 150 surface ships and submarines of the 16 – 20 states are on combat duty every day in the World Ocean. These military forces are constantly located in those areas where they constitute a threat to the security of Russia. The European part of Russia and the Far East are almost 80% available for conventional (non-nuclear) means of attacking sea-based (such as cruise missiles and carrier-based aircraft). This territory is home to a large part of the population of Russia, it concentrates over 60% of the industrial and military-industrial potential, and strategically important government and infrastructure facilities are located.

Hence, the first task of the Russian fleet (the most obvious) is to protect the territory of Russia from non-nuclear means of attack and expeditionary forces of the enemy from sea directions. But even this task has to be solved not only in the near sea zone (it is determined by the range of the coastal facilities, mainly aviation), but also at a considerable distance from its own coast. The fact is that the open spaces of the sea are available for moving military forces to foreign shores. Nobody can forbid a potential enemy to be in close proximity to the coast. The only way to protect against unpleasant surprises from maritime destinations is the so-called gun tracking. That is, the escort of potentially dangerous movements of the enemy by the forces of his fleet. And for this you have to go to the far sea zone. After all, to push the potential threat away from its immediate borders - you need to meet it further from its shore.

But in addition to conventional weapons, which the fleet is able to move over long distances, there is also a nuclear weapon. The US Navy and NATO can operate in virtually any area of ​​the world's oceans, while carrying almost half of the nuclear arsenal of Western countries. This is not only about missiles placed on submarines. Deck aircraft can be equipped with nuclear munitions. And in the future (so far distant), the United States will be able to strike non-nuclear strategic means of attack on any point on the earth's surface. Protection from this threat can only be the inevitability of a retaliatory strike on the territory of the aggressor.

Hence, the second (and the main) task of the Russian fleet is to ensure the inevitability of a retaliatory strike with the help of our own means of nuclear deterrence. As well as the weakening of the enemy’s offensive assets by destroying them, which is also possible only with the help of tracking the enemy’s naval forces. And this task can not be solved near the coast. We need surface forces that are able to act in the far sea and in the ocean zone. Without them, it is impossible to ensure the deployment and combat stability of operational submarine formations. Without them, it is difficult to use strategic long-range aviation on sea routes.

Recently, the fleet has new tasks associated with the challenges of the present time. The US is developing its fleet in new directions. Thus, instead of the currently existing 12 carrier-based strike groups (AUG), new independent strike groups are being created to conduct operations in any part of the world. So, 9 groups of surface missile defense ships are being created. In the future, they will pose a danger to the potential of our retaliatory strike. And given this, we need to learn to counteract these groups.

Also created are 12 expeditionary strike groups. Together with the development of the sea and air supply system, as well as with the development of European fleets and armies, NATO’s modern concept of the use of force is in the direction of enhancing expeditionary capabilities. It proceeds from the fact that against a strong adversary it is inappropriate to carry out direct aggression until it is weakened by economic isolation and internal conflicts. You do not need to fight for yourself if you can create prerequisites for internal conflict, support and supply internal destructive forces. Using these tools, NATO plans to weaken the military and economic potential of its adversaries and negate the possibility of retaliatory action on their part. At the first stage, NATO’s direct military intervention is limited to supporting and supplying the internal forces of the object of aggression. At the second stage, the use of remote weapons is also limited. And only at the third stage provides for the participation of expeditionary ground forces for the so-called "crisis management". And in all three phases, the naval forces of NATO play a key role.

That is why we are building a new ocean fleet. That is why Russia announced the constant presence of fleet forces in the Mediterranean, when this region became the target of a targeted NATO action. That is why we start the Atlantic campaign and carry the flag of St. Andrew to the shores of Cuba and Venezuela.

Let the power of our fleet is still limited. They will appear. According to American forecasts, only Russia and China after 2015 – 2020 have a chance to become regional powers capable of challenging the US military power in their regions. Let them now laugh at the capabilities of the detachments of our ships in the Mediterranean and in the Atlantic, forgetting that they are backed up by the potential of strategic forces, which makes it impossible to directly clash with our fleet. In the Mediterranean and in the Atlantic, we learn and carry the St. Andrew's flag there. We are learning to be a power.

Ctrl Enter
Noticed oshЫbku Highlight text and press. Ctrl + Enter
We are
5-I operational. Interview of Admiral Retired Selivanova Valentin EgorovichSyrian Rubicon of the Russian Navy. Ships of the Russian Navy rushing around the Mediterranean with unclear objectives
36 comments
Information
Dear reader, to leave comments on the publication, you must to register.