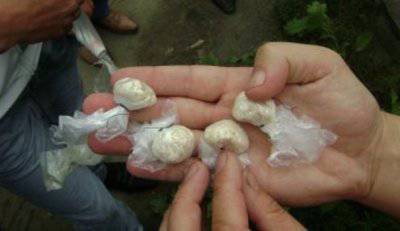 Specialists in the fight against drug abuse say that the true number of drug addicts in most countries of the world is 9-10 times higher than the number of drug addicts identified. This assessment was made on the basis of numerous studies, which involved not only the employees of the Federal Drug Control Service, but also, as they say, social activists. At the same time, the ratio has not changed for many years, even though the methods for detecting and treating drug-addicted people have been significantly modernized.

Statistics related to the study of the age parameters of drug addiction suggest that today in Russia the largest number of citizens who use certain drugs belong to the 16-30 age group (60%), 20% of drug addicts are persons who have not reached 16- summer age. Another 20% - people who, using drugs, were able to live to 30 and more years. At the same time, the number of drug addicts of the weaker sex increases in Russia every year. These data once again confirm the fact that drug addiction inflicts a crushing blow on young people, mows people at reproductive age - those who, being healthy, could create a family, give birth to and raise healthy children.

If you believe the representatives of the Federal Service for the Control of Drug Trafficking, the Russian Federation today is one of the sad three leaders in the number of drug addicts in percentage terms. The first place belongs (according to the Federal Drug Control Service) to Afghanistan, the second (honestly, unexpectedly) belongs to Iran. The World Health Organization is the absolute leader in the number of people with drug addiction, called the United States of America and the Russian Federation. At the same time, the United States has the highest rates in the world in the number of cocaine users, in Russia it is heroin.
With what kind of country is at the world peak in the number of drug users, one can argue for a very long time, but at the same time it would be strange to say that both the Federal Drug Control Service and the WHO provide false data about Russia. The problem of drug addiction in our country is, and not to notice it is just silly. However, if you pay attention to the activities of law enforcement agencies, you get the impression that they just notice, at least, not always ...

Voronezh suburbs. The so-called gypsy quarters. Among the fairly modest private buildings there are real palaces. Who lives in these palaces, knows the whole district. Know the names, surnames and what the representatives of these surnames trade. Every day, “workers” disperse (disperse) from the Gypsy suburbs to different points of the city and region. These are dragdalers who get their own distribution point for a wide variety of drugs. Specialization - from spice to heroin. Daily profit of each such point can be a couple of hundreds of thousands of rubles and above. Profit falls into the clan, the business expands, new dealers are attracted, new ties are established with suppliers, well, with “roofing” elements. The fact that these rooftops often turn out to be among regional officials or representatives of law enforcement agencies is also not a secret.

Occasionally, law enforcement officers (especially before the lenses of television cameras of central television companies) conduct raids that are arranged according to all the rules of the show: masked people, vehicles with special signals, an assault on the house in which the drugs are packaged and distributed. Noise-gum, tears, lamentations - in general, the whole performance. However, after the end of such an anti-drug raid, the owners of drug lodge houses again return to their usual activities, as if nothing had happened. It would be as if they were not taken away in the police "little dogs" or "funnels" ...

Naturally, such turns of events in people cause real indignation. Realizing that regional law enforcement can be associated with the control of drug trafficking, the public is ready to go for the most radical measures, and all over the country, and not just in a single region. 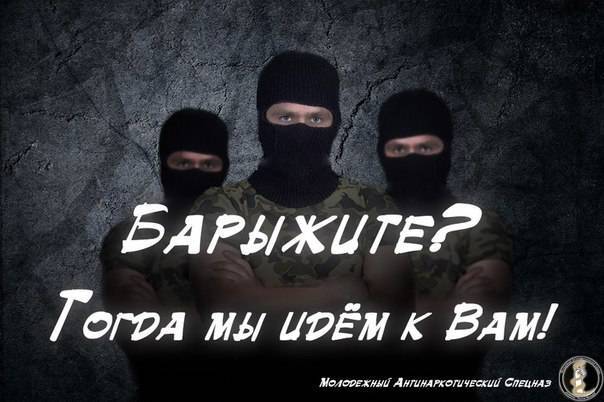 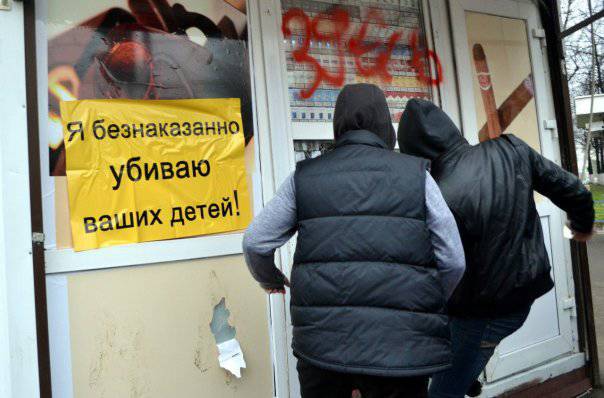 One of the manifestations of radical measures is the activity of such an organization as MAS (Youth Anti-Drug Special Forces). In RuNet, you can find dozens of different clips dedicated to how representatives of this association carry out actions against so-called spice dealers, which, in principle, can be considered almost legalized drugs in our country. The essence of actions comes down most often to the fact that a group of young people chooses one or two people under the age of majority who make a test purchase of spices either in a tobacco stand or in a drag dealer’s car. As soon as the goods are bought, a few people from MAS fly on a stall (car), pull the seller out, paint his head with paint, and smash glass in the place of his trade, and then turn the car or kiosk over, sticking the sticker “Here with impunity kill your children "or" I freely trade in drugs ". After the action, young people (and these are most often schoolchildren or students) also quickly scatter from the scene, burning sachets of spice bags. For some, this is a kind of “Zarnitsa”, entertainment, but for some it is a real desire to resist the spread of the drug threat in the country. Someone combines ...

At the same time, despite the rather extravagant way of punishing drug dealers, which crosses the line of criminal law, many passers-by support representatives of the IAC. The main argument is that if law enforcement officers try not to notice what is happening under their nose, and how young people are turned into drug addicts with a new force, then someone should notice and resist the threat.

Despite the support of the people in the official group "MAS" in one of the social networks for the last time hangs the announcement that the organization ceases to participate in the actions that were described above. However, the idea of ​​"MAS" was picked up by others. Today, peculiar derivatives of the Youth Anti-Drug Special Forces operate in different regions of Russia and are fighting against the spread of drugs in Russia and against the continued increase in the number of drug-addicted people.

Today, the Federal Drug Control Service declares that there is a program in the service, according to which, by the year of 2020, the number of drug-addicted people in our country should decrease, no less, 30 times. The number is more than impressive, but how do FSKN experts plan to go to it? The answer of service representatives is to give grants to organizations that are engaged in the rehabilitation of drug addicts and their subsequent orientation towards life in a society without drugs.

Everything seems to be good, but that's just confusing that the Federal Drug Control Service for the implementation of this program asks 150 billion rubles. No, no one is going to regret the money for the rehabilitation of drug addicts, but, bearing in mind the possible corruption component, it is worth asking: who will control the Federal Drug Control Service itself? who will receive these grants? Will the Federal Drug Control Service have a “Oboronservis” with bogus structures? Or take a word that the number of drug addicts will decrease many times by transferring money to the accounts? .. Maybe, for starters, let those mentioned rehabilitation organizations present real results on reducing the number of drug addicts, and then they can be rewarded for their active work by many millions. Or, in our country, always all the funds allocated from the budget go exclusively to the implementation of the plans, and the author's concerns are groundless here? ..

Ctrl Enter
Noticed oshЫbku Highlight text and press. Ctrl + Enter
We are
Report on the results of the survey-2013 "Evaluation of state political figures"
Military Reviewin Yandex News
Military Reviewin Google News
140 comments
Information
Dear reader, to leave comments on the publication, you must to register.