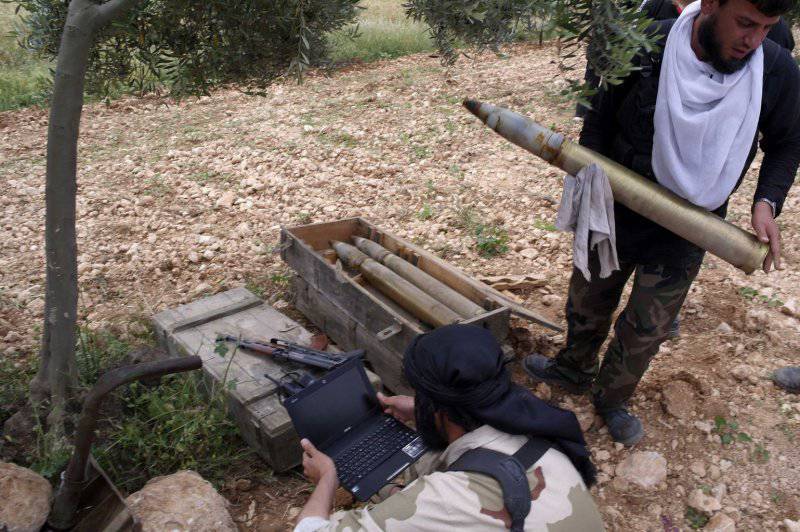 
All of this belonged to the Afad al-Rasul group, which is fighting the Syrian army under the flag of the Supreme Military Council of the SSA. The boxes were easily identified by the 412 number in the triangle - under this symbol of the USSR and Russia, China, North Korea, Belgium and other suppliers weapons sent the colonel their products. Some even preserved the original destination address from 1980 of the year: "The Socialist People’s Libyan Arab Jamahiriya."

Typically, weapons shipped from Libya are light infantry and grenades, with a maximum of RPGs and mortar mines. However, in this case, boxes were found from ammunition for 106-mm M40 recoilless guns manufactured in Belgium, as well as Russian Competition-M ATGMs that no one had expected to see against Russian tanks Syrian army. These are serious anti-tank weapons.

Fawzi Bukatiff, a Libyan diplomat, ambassador to Ethiopia and at the same time a former commander of the February 17 Brigade, rebels from Benghazi, said that his sources of supplying weapons from Libya to Syria have been going for over a year. This is done by sympathizing groups, who themselves collect weapons and ammunition, and when they have accumulated enough, they send packages to the “Syrian brothers.” “It's just the enthusiasm of the Libyans helping the Syrians. The official government of Libya does not interfere in what is happening. But actually, what's the difference, ”he said.

The underground route was as follows. By plane or ship the weapon is delivered from Libya to Turkey. For example, the C-17 air transport of Qatar’s air force made three flights to Libya this January, 15 in January, 1 in February - in Tripoli and 16 in April - in Benghazi. From there, the aircraft returned to the base of El Udeid in Qatar. Then, their cargo was shipped by sea to Turkey, along with other weapons and equipment that Qatar collected for the rebels.

In Turkey, cargo receivers became a developed network of intelligence officers and opposition leaders. The Syrian rebels, along with their Qatari sponsors and the Turkish government, have developed a whole system for acquiring and distributing Libyan weapons.

According to Safi Asafi, the senior coordinator, “any detachment that wants to arm itself with Libyan weapons appeals through the Supreme Military Council of the Free Syrian Army for permission from the Turkish authorities and receives it. Weapons come to Syria, and here everyone gets their share. " Usually, the SSA takes 20% of supplies to individual groups and distributes them among the rest. However, the percentage of seizures depends on the status and influence of the group; they can take more from insignificant ones.

Further, the rebels, in accordance with their internal preferences, are armed by completely underprivileged groups. Usually, external polite is observed, and the most odious and forbidden groups do not supply weapons. However, to get around this ban costs nothing. Prohibited groups simply outbid weapons from those who got it from the SSA, or order it for themselves through dummy movements that no one had heard of before. The country has a powerful black market, in which there are enough sellers and buyers.

Thus, as soon as the weapon enters the territory of Syria, it is impossible to ensure that only “democratic rebels” become its recipients. Buyer can be anyone who has money. Consequently, the excuses about supporting only the "right militants" are meaningless - the possible transfer of weapons to insurgents from the EU and the US will in fact inevitably turn into another channel for the supply of deadly cargo from the same distribution network. She doesn’t care that one of the channels will now be official.

Earlier, the rebels delivered weapons to military transport planes of Saudi Arabia, Jordan and Qatar from a wide variety of sources, including warehouses of the Warsaw Pact countries.