27 2013 June
49
In June 1973, the first combat use of the Soviet BMP-1 took place. This happened in the Middle East, during the fighting of the Syrian army against the Israelis in the Golan Heights. 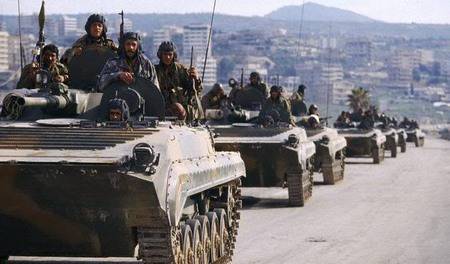 The Syrian crews have not mastered the new class of military equipment for them, and therefore many vehicles were lost due to errors in operation. To absolve themselves of responsibility, the Syrians criticized the vehicles for the alleged, in their opinion, insufficient firepower, security and maneuverability. True, as Soviet military advisers told us, the Syrians liked that the Malyutka anti-tank complex, which could hit any Israeli tank at that time, was mounted on the BMP-1.

Another 150 units BMP-1 were part of the Egyptian army, which led the attack on the Sinai front. Here, infantry fighting vehicles operated more successfully, their opponents - the Israelis, by the way, on the contrary, noted the excellent maneuverability of vehicles that confidently overcame salt marshes.

The Egyptian side, in the end, also lost this war, but in its defeat, as always, it began to blame the USSR, they say, the Soviets supplied obsolete equipment - yes, you could still meet the T-34 and Su-100 as part of the Arab troops (they , by the way, the Soviet Army was not withdrawn from service as well as other equipment of the Great Patriotic War), but there were many and quite modern ones, such as tanks T-62 and BTR-60PB. As for the BMP-1, then at that time these machines were considered almost the latest. Many Warsaw Pact allies could only dream of them.

After the end of the 1973 war, Egypt shortly before the full break with the USSR managed to get some more bempes, which until recently were still in service with the army, although they were in storage. The Egyptians replaced the Soviet engine with Western-made engines.

According to some reports, during the Iran-Iraq war, a number of BMP-1 was delivered to Iraq. In addition, the Egyptians donated one such machine to the Chinese, and by copying it, they began unlicensed production. Another number of former Egyptian infantry fighting vehicles turned out to be in the United States and other Western countries.

The fate of the Syrian army’s BMP-1 became even more dramatic. The respite after the 1973 war of the year was short. Soon the bloody civil war in Lebanon began, in which the Syrian contingent, armed, including the BMP-1, took an active part.
This brutal war of all against all was complicated by the fact that, wishing to secure its border from the partisan attacks of the Palestinian forces, Israel from time to time interfered in it, which in 1982 invaded Lebanon.

In the Bekaa Valley, Israeli forces clashed with the Syrian contingent stationed there. BMP-1 were actively involved in the fighting. They, allegedly, missiles "Baby" even shot down several Israeli tanks.

After the withdrawal of Israeli troops, the Syrians many more times were involved in various showdowns of Lebanese paramilitary groups.
In total, according to various estimates, Syria received from the USSR about two thousand BMP-1. It is worth noting that most of the cars were not modernized. It was in this form that they met the civil war that local extremists unleashed, as they would say in the Soviet years, with the "support of international imperialism and reactionary forces."

Along with the T-72 tanks of various modifications, the T-55 and T-62, the BMP-1 became the real workhorses of this war. "Pennies" are used, as they say for slaughter, it seems unlike the BMP-2, they are not particularly sorry. 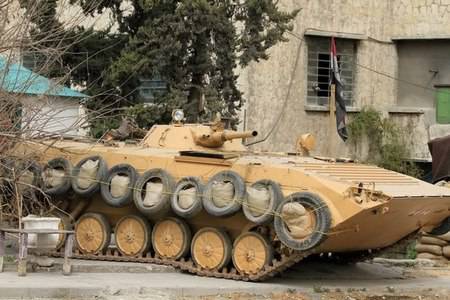 Unfortunately, in this conflict, the long-known shortcomings of this machine again surfaced, now the lack of security has taken the first place. And for a long time, military experts were surprised that the Syrians practically did not take measures to create an effective defense. Do not regard as such hanging tires on the sides with bags filled with sand.

But recently, they began to take measures to create an improvised defense. As, for example, the option on the photo. A tracked belt is fastened around the tower, on which elements of dynamic protection are visible. The sides also installed screens, which, apparently, were disrupted during the use of infantry fighting vehicles in urban environments. Of course, this military modernization can hardly be considered optimal, but it allows you to increase the survival rate of the BMP crew during combat operations. 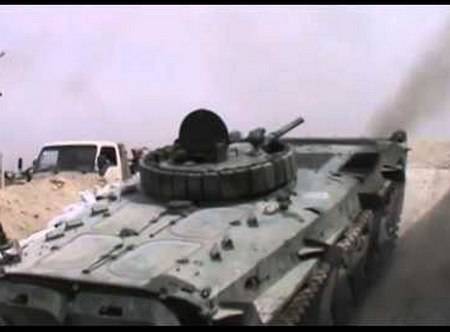 If you believe the pessimists who claim that two or three hundred BMP-1 have already been hit, then, given the total number of equipment available to the Syrian government troops, these armored vehicles should suffice for a long time.

Ctrl Enter
Noticed oshЫbku Highlight text and press. Ctrl + Enter
We are
Is the "old" well forgotten to become the "new"? Part-2. At the call of honor and dutyIron fist of the Red Army. Motorized and tank divisions
Military Reviewin Yandex News
Military Reviewin Google News
49 comments
Information
Dear reader, to leave comments on the publication, you must to register.