The truth about captured Soviet soldiers 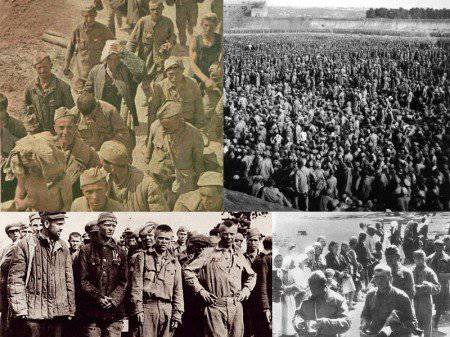 On television screens, newspapers and magazines, the statement that all Soviet prisoners of war, liberated from fascist concentration camps, were sent straight to concentration camps and convicted, is still strolling. It's a lie.

From school years I remember the phrase allegedly said by I.V. Stalin: “We have no prisoners. We have traitors. ”. Therefore, when a wave of exposures of everything and everything fell on the “perestroika” country, and on television screens, newspapers and magazines, the statement was made that all Soviet prisoners of war, released from Nazi concentration camps, were sent straight to the Soviet Gulag, was not surprised - why not to expect from a “bloody dictator” for whom all prisoners are traitors? Over time, the assertion about the change of the fascist camps to the Soviet ones acquired the status of an obvious truth that does not require proof, since “everyone knows about it.” And since "everyone knows" so what to prove?

Among these "all knowers" was the author of these lines. I stayed until I had the happy opportunity to work in the archives of our Ulyanovsk regional ATC. The post-war situation of Soviet prisoners was not the subject of my interest, so I came across documents about them by chance. And the “obvious truth” immediately turned into a very controversial one.

By the end of the war, special units for working with repatriates were created in the system of the Ministry of Internal Affairs. Repatriates The Great Soviet Encyclopedia names those who have been repatriated. And repatriation (from late Lat. Repatriatio - homecoming), according to TSB, is:

“1) the return of emigrants to their country of origin with the restoration of citizenship rights.
2) The repatriation of prisoners of war and civilians who found themselves outside their country as a result of military actions. ”
The Ulyanovsk region was not under the fascist, so there wasn’t any forcible hijacking from here to Germany. Consequently, only prisoners could be repatriated, by the will of fate turned out to be abroad. It was with them that the newly created units were to work.

To the Head of GUBB of the USSR Ministry of Internal Affairs
Lieutenant General Comrade. Leontiev

Summarize: from 2108 returned home of ex-prisoners 37 came under suspicion. However, they were not thrown into the dungeon, and carefully and quietly checked. As a result, only eight were arrested - 0,4% of the total number of arrivals!

And arrested for very specific crimes.

«Vlas Ilyich Chetkas Mr. 1902, born in Filippovka, Melekessky District, illiterate, was drafted into the army and sent to the front of February 4.1942. While in military guard, together with Samsonov Dmitry Nikolaevich from p. Mullovka of the same district, April 171942. By mutual agreement left the post, took weapon - rifles and went over to the Germans. "

And here is another example: “In January, 1946 in the Radishchevsky district, during a conversation with the repatriate Krotenko, Pavel Matveyevich, who was born on November 21, the suspected use of some information from his autobiography. During the subsequent development and verification of Krotenko, it turned out that during the interrogation he incorrectly named his last name, first name and year of birth. When checking it turned out that according to the records of the All-Union search, he passes as Korotenko Panteley Matveyevich 1907 of the year - as a suspect in going over to the side of the enemy. The search report states that Korotenko, together with the servicemen with Paramzin, Kashtanov and Kamushkin, being in combat guard, surrendered to the Germans. ”

Such are the "innocent victims." Materials in respect of all eight transferred to the investigating authorities. But this does not mean that they were inevitably "put against the wall" - they, at least, did not work for the enemy, and did not fight on his side against their own.
“In the course of servicing repatriates by the bodies of the Ministry of Internal Affairs of the Ulyanovsk region, only 3 people have been identified who are to be sent for resettlement as special settlers,” Colonel Grakov, head of the Ulyanovsk Region Ministry of Internal Affairs admits in his memorandum to the Interior Ministry

I wonder who these three have received such a mild punishment?

"These 3 people served in the German army," - said the colonel.
According to the data on 10 of May1946, 30 repatriates living in the Ulyanovsk region were in operational development. Of these, 28 is a man on suspicion of treason, and two more as agents of German intelligence. At the same time, being "under the hood" did not prevent them from living and working normally. So one of the suspects was in charge of the sawmill workshop of the Baryshsk cloth factory, another worked on the collective farm and lived in Bogdashkino, Cherdaklinsky district, and another one not only became the brigadier of the tractor brigade in the village of Solovchy Radishchevsky district, but also joined the candidates of the CPSU (b)!

I do not know whether suspicions against these people have been confirmed or not, therefore I don’t give them names.

“In January, on the basis of data obtained from official sources and the operational information network, the repatriated 81 arrived at the territory of the Ulyanovsk region was revealed,” said a memo for January 1947 sent to Moscow. It turns out, about any echelon with former prisoners we are not talking? People came, so to speak, "by gravity", each on its own? “Most of them were summoned to the regional bodies of the Ministry of Internal Affairs to fill out questionnaires and other materials. As a result of the calls, as well as from operational data, it was established that one of the arrivals did not pass any preliminary checks at filtration points and camps and arrived in our region, bypassing them, and 12 repatriates did not arrive at their chosen place of residence. On the latter, filtration materials from the relevant authorities are requested. ” And not a word, about any repressive measures! Suspicious behavior is a reason for additional verification, but for no arrest. And further, it is completely surprising: "There are signals that some of the 81 people who arrived, after being released from captivity, served in the Soviet Army, from where they were demobilized."

It turns out that the released prisoners were not driven into the GULAG, but they were given weapons and put into the army!

“During January, the repatriated 1951 filtering passed in the district inspection and filtration commissions. According to incoming data on 1.II-1947, 121 people repatriated in the region remained untested. This number includes 81 people arriving in January. The facts of the exposure of repatriates as agents of foreign intelligence and other hostile elements during the work of verification and filtration commissions in January of this year. not noted. "
And yet, some of those who returned to their homeland, fell behind bars.
“The repatriate Terentiev Mikhail Yakovlevich was arrested by the Sursky District Department of the Interior Ministry. The latter, arriving at home in s. Knyazhukha, Sursky district, organized a thieves' group of three people. This group committed a basement warehouse Zagotzerno depth and tried to steal the bread. At the time of the crime, they were detained and arrested. Terentyev and two other criminals convicted.
In Terengulskoe RO MIA received a prompt message that in with. Yazykova and Yasashnaya Tashla live in an illegal situation Chinarov Viktor Prokhorovich and Shevyashov Alexander Petrovich ... The measures taken were both detained. The investigation established that they were indeed in captivity by the Germans and, after being released from captivity, were held in the PFL (previously the filtration camp - VM), from where they were sent to the working battalions. Of the latter, both escaped and hid without documents in the territory of the Terengu district. Prosecuted as deserters of industry. "

- Yeah! - exclaim opponents. - So, there were camps after all! Let and filtration!

Of course, there were, by the way, not only among us, but also among the allies. However, the stay in them did not last long and the "filtered" sent who to the army, who — home, and who — to the working battalions — militias that were used to rebuild destroyed industrial facilities, railways and other vital infrastructure. However, this did not mean an automatic "death sentence."

From a memo on the results of the work among repatriates of the Ministry of Internal Affairs in the Ulyanovsk region for 2 quarter of 1948:

“During the reporting period, 10 people of repatriated Soviet citizens arrived on the territory of the Ulyanovsk region. By checking the newly arrived repatriates it was established that one of them was in the personnel of the industry, where he was transferred from the battalion of workers, the others, after captivity, served in the Soviet Army and were demobilized. All repatriates were tested and filtered at the place of work and service. Have a passport in their hands. From the cadres of industry, they have been released to their former place of residence for health reasons and in some cases for family reasons. ”

But if the authorities had no questions for these people, then there were some others: even after three years from the day the war ended, the work on identifying the traitors to the motherland did not stop.

«Sitnikov Philipp Ilyich, 1916 born, born with. Domosserki Bazarno-Syzgansky district of the Ulyanovsk region, lived by place of birth. Sitnikov, being held captive by the Germans, voluntarily joined the German army, embarking on the path of treason against the motherland ...

Ozhev Alexander Stepanovich, 1915 born, born with. Crest Gorodishchi Cherdaklinsky district of the Ulyanovsk region, the formation of 5 classes, specialty driver, lived in the place of birth. Being in German captivity in the city of Uman of the Ukrainian SSR, he voluntarily enlisted in the police as a police officer, for which he received monthly 150 marks and free food.

Kruglov Petr Stepanovich, 1911 born, born with. Kremensky settlements of the Staromainsky district, Russian, competent, non-partisan. Captured in 1942 year near Leningrad. Being in captivity in the city of Krasnoselsk, voluntarily went to the service of the Germans ... Subsequently, in Germany, in the city of Mizenburg, he joined the German SSN division of the German army ... Being in the service of the Germans, Kruglov received German uniform, 19 marks a month and enjoyed other benefits. 15 May9. 1945 SS division was captured, including Kruglov. ”

All of the above, as well as a number of other repatriates, convicted of treason, were arrested, convicted and ... no, not shot, but not even sent to camps, but to special settlement, as a rule, in remote areas of the USSR.

These are the facts. Surely documents of this kind are stored in all regional police archives and in the central archive of the Ministry of Internal Affairs. Stored and waiting for their researchers. But even now it can be argued that there was no complete repression against Soviet prisoners of war, only for being in captivity in the Soviet Union. On the contrary, even the exposed traitors received relatively humane punishment. So, the trains that allegedly transported them from the fascist concentration camps to the Soviet gulag are nothing more than a myth that cannot withstand even the most superficial verification.

And the myth, by the way, is far from the only one.

Ctrl Enter
Noticed oshЫbku Highlight text and press. Ctrl + Enter
We are
Prisoners of war as losses and trophies on the Russian front of the First World War.Dark spots of history: the tragedy of Russians in Polish captivity
Military Reviewin Yandex News
Military Reviewin Google News
151 comment
Information
Dear reader, to leave comments on the publication, you must to register.