Russian army: getting out of the reform pit 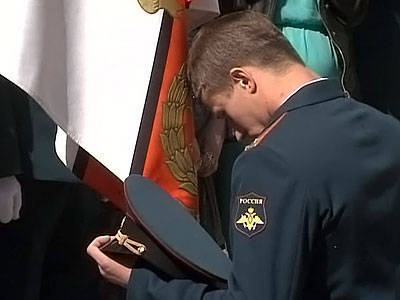 Three years ago, when the country was informed that the Russian army would be subject to effective reform, we suddenly learned about the abolition of enrollment in higher military schools (institutes, universities). It turned out that the so-called optimization measures eliminate the need for training young officers. The question of training lower-level commanders remained unanswered. To say that the abolition of enrollment in military universities has caused a state close to a shock among those who are not indifferent to the fate of the Russian army - to say almost nothing. Many frankly did not understand what path is being reformed by the country's Armed Forces and which circle of problems is solved if the very reformed army is deprived of professional young recruits.


The answer from people from the camp of the ex-minister (now the ex-minister, and then - in 2010-m - the very main defense reformer himself) Anatoly Serdyukov was about the following: the officer corps was too bloated, and for a compact, mobile, organized army he, he says, does not fit. However, in the same explanation of the need to abolish enrollment in military schools, there was a contradiction. It consisted in the fact that perhaps the number of regular officers was unnecessary for a compact, mobile and organized army, but the army itself still needed to be done. Obviously, it was neither compact, nor mobile, nor even organized (if not to speak of individual units, but to take the army as a whole). And in order to make it both effective and organized, reform was supposedly started. But in order for the tree to start bearing fruit, does this tree have its roots cut down? .. It doesn’t have a tree, but what happened in the army: it was chopped down on the basis of the fundamentals - to train qualified officers.

At the same time, it was started, excuse me, cleaning the officers (and not only the officers) ranks. The reduction, which was replaced by a neutral interpretation of "optimization", was quite painful. One of our regular readers writes:

In light of the recent decisions of the former Minister of Defense, measures are being taken to reduce and dismiss officers of the RF Armed Forces. And the slogan of this reduction is: “We give everyone housing ... All those who are being laid off.” That is, a soldier who gets housing is obliged to resign, regardless of experience, rank, or length of service.

Many of the currently dismissed officers are far from retirement age, and are ready to continue their service, but senior management believes that they are no longer needed. Here the question arises: why? Either there will be another incomprehensible reform of the Armed Forces of the Russian Federation, or Russia does not need experienced military personnel.

Indeed, when people tried to understand the intricacies of military reform, it was somehow far from the concept of defense capability. After all, it’s strange to speak about improving the army’s efficiency, but at the same time getting rid of people who could well (based on accumulated experience and professionalism) for this very effectiveness, they say, it’s cleared up. Immediately after the words "green men" from famous persons, scattering diamonds in all the boxes of their "hlup". It was these individuals who, with time, appeared before the Russian public as the true salt of military reform: let’s get rid of the “extra green men”, and the “survivors” under the reformist bombing will fill the new efficient army with a renewed monetary allowance. At least, the paper version of the ongoing reform was hinted at that indirectly.

This year, enrollment in military universities is resuming. Of course, during this time, the reformist rink managed to stroll along the universities themselves, many of which were left by the most experienced military teachers, who had several issues of professional military personnel behind them. It’s difficult to say what the situation is in the remaining military institutes and universities, which now have a slightly different form of subordination (legally attached to military academies), after three years of lack of student enrollment. The fact that the ranks of military educators have thinned is a fact, and how are most of them again drawing to universities? - A question about which decision while the Ministry of Defense speaks very carefully. As an option: "Return, for God's sake!"

So, if we talk about which military universities recruit cadets in 2013 year, then we can submit the following list.

It should be noted not only the fact of the resumption of full-fledged enrollment in higher military schools, but also the refusal of most of them from training programs for such specialties as a lawyer and economist. Of course, this does not mean that the modern army should cease to be friends with the letter of law or with the economy, but when up to a third of young lieutenants who graduated from designated areas in military schools left a year, then most of these young officers automatically turned into unemployed, it led to certain thoughts. But the thoughts are simple: military universities simply had to survive in the conditions in which they were put.

By the way, gentlemen from Serdyukov’s "galaxy" tried to justify with these facts that the high schools of the Ministry of Defense mostly stopped the recruits. But it is foolish to try to justify the complete elimination of the recruitment by the fact that many professions that were prepared by military universities were not claimed. Could it not be possible to stop the recruitment of “lawyers-economists” and other managers first, by financing military universities to work effectively with really significant specialties? Apparently, it was impossible ... Well, nothing, you know, did not fit into the system of eliminating the entire system of training "green men". Did not fit and that's it. And therefore: “to the ground, and then ...” This is the very “then” today that emerges.

You can count on the fact that the three-year pit, which directly touched higher military education, as well as personnel “cleaning”, will not leave unhealed scars on the Russian army. Of course, the scars will heal with time, but how long will this take? - Even the most experienced experts will not be able to answer this question.