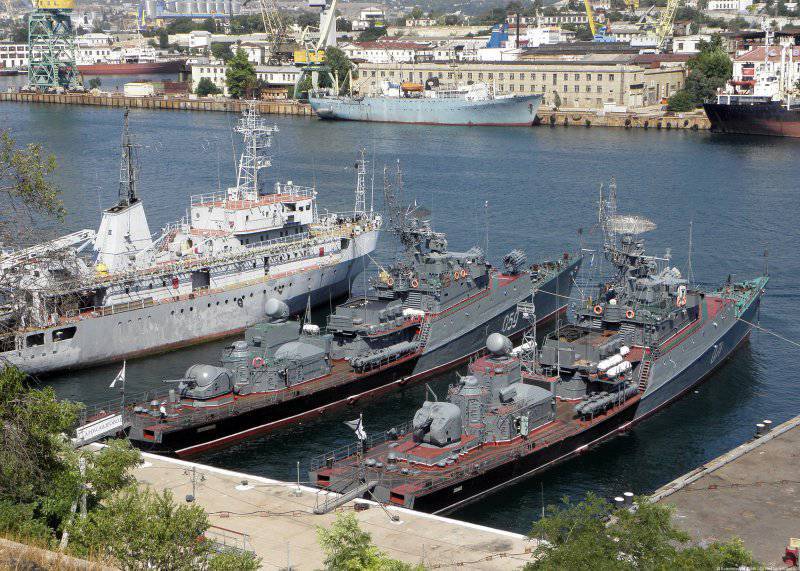 In mid-June 2013, the Verkhovna Rada of Ukraine registered a bill on the denunciation of an agreement on basing the Russian fleet on the territory of the peninsula of Crimea. The decision to terminate the agreement was supported only by 152 deputies. However, even if all the opposition were present at the meeting, their votes would still be small. At the same time, the very fact of the absence of like-minded people at such a crucial moment aroused discontent among some representatives of the opposition forces, and there is nothing surprising in this. Indeed, even if such an event, which will once again “annoy” Russia, no longer causes enthusiasm among the “twin cities,” there is already reason to think seriously ...

It should be noted that the proposals on the termination of agreements on the Black Sea Fleet have been submitted to the Ukrainian parliament more than once, but so far this has not brought any results. Since the treaty between the countries was ratified (this is April 2010 of the year), the opposition forces have made the fourth attempt to denounce it. The first initiator of the termination of the agreement was Andrei Parubiy, a deputy from the block of Our Ukraine - People’s Self-Defense, who, in addition, was an active participant in ratification fights. The bill proposed by him was registered in the spring of 2011 of the year, but in June it was rejected and removed from consideration.

In January-May 2012, the deputies did not have the right to introduce bills on the termination of international agreements. However, such a right was soon returned to the deputies by the Constitutional Court. The dissatisfied took advantage of this almost immediately. The initiative was passed into the hands of Vladimir Yavorivsky, a deputy from the opposition Yulia Tymoshenko Bloc, who hastened to submit his own bill to the Verkhovna Rada. However, nothing new was contained in this document; moreover, he practically repeated word by word the Parubiy document. It is clear that this similarity ultimately led to the same end. In December 2012, the Yavorivsky bill was also withdrawn from consideration, but at the initiative of the author himself. However, as it turned out later, the “self-withdrawal” was tactical in nature. Yavorivsky was replaced by a young and ambitious politician Oleg Lyashko, who is known for his radical views. He submitted his bill to parliament only five days later than Yavorivsky. But, in comparison with his predecessor, he approached with all seriousness the matter, not limited to simply rewriting the test, but put forward his own requirements. First of all, the politician demanded that all the relatives and relatives of the Russian servicemen, as well as those who are members of military enterprises, institutions and organizations, leave the territory of the Ukrainian state.

Despite the “individuality”, Lyashko was forced to retreat along with Yavorivsky, and personally withdraw his bill on the same day. But soon, Vladimir Yavorivsky reappeared on the “battlefield”, who registered the new bill less than a week later, without making any changes to it, however. But even despite the fact that the bill managed to reach the session hall and get to the deputies' consideration, it was still expected to fail, which, strictly speaking, occurred the other day.

The main scientific and expert department of the Verkhovna Rada was forced to reflect the maneuvers of the opposition. Very little effort was expended on the first bill, because the author demanded only those agreements that were concluded between Ukraine and Russia regarding the basing of the Russian fleet on Ukrainian territory were denounced. By that time, we recall, the Kharkiv agreements have not yet been signed. Representatives of the department insisted that in such issues, subjects of legislative initiatives could be either the head of state or the government, but not deputies.

When the decision of the Constitutional Court appeared, the administration was forced to change tactics, and both the Yavorivsky draft laws received the same expert opinion. First of all, the author was explained the essence of the term "denunciation", and in addition, the experts considered that the requirements of the author of the draft contradict the Vienna Convention on International Treaties, signed back in 1969, but which is mandatory for Ukraine. In addition, the experts also argued in great detail why he considers Yavorivsky’s statements to be mistaken that the presence of the Russian fleet on Ukrainian territory contradicts the Constitution of the country. And, not least, it was popularly explained that they consider the statements of the politician to be unfounded as to the fact that, in the framework of the implementation of the draft law, large investments by the state would not be required. Similar clarifications were received by Oleg Lyashko.

If we talk about the constitutionality of the location of the Russian fleet on the territory of the Crimean peninsula, then this question has caused heated debates for more than a year now. Even during the years of Yushchenko’s presidency, the head of state himself called on his political opponents not to speculate on this issue in order to please the electorate more, although he himself used the “forbidden method” more than once.

In fact, everything is much simpler. According to the Constitution of Ukraine, the deployment on the Ukrainian territory of foreign military bases is prohibited. But at the same time, in the Transitional Provisions of the same law there is an article which states that the temporary stay of foreign military formations on Ukrainian territory is possible only on lease terms, but only in the order indicated in international agreements ratified by the Ukrainian parliament. Thus, the provisions of the law can be interpreted in two ways: if someone believes that the Russian fleet has no place on the Ukrainian territory, he may demand its withdrawal, but if not, then we can assume that the lease of the territory will be extended by relevant international agreements. Neither one nor the other position absolutely contradicts the Ukrainian Constitution.

There is another, no less interesting question: why did the opponents of the stay of the Black Sea Russian fleet decide to denounce the treaty right now? After all, the extension of the lease, according to the Kharkiv agreements, is provided only with 2017 year. And if you take into account the statement of the opposition on their intention to win the upcoming presidential elections, which will be held in 2015 year, it is completely incomprehensible that they can prevent them from denouncing the agreement after this very victory.

In addition, it should be noted that the Russian side itself does not exclude the possibility of termination of the Kharkov agreements in the event that the Ukrainian government goes to court to revise the gas contracts. But Moscow is sure that Ukraine will not go to such a rash step, because it threatens with serious problems - a significant increase in the cost of Russian gas, as well as considerable debts, because after these agreements came into force, Kiev has already been given a discount of 6 billion dollars, which in case of breach of contract, will have to return ...

Thus, from the above, one conclusion can be made: the denunciation of agreements on the Black Sea Fleet by the Ukrainian parliamentarians will not be accepted. Firstly, because the opposition does not have a sufficient number of votes, and secondly, because the opposition themselves have not fully decided what they really want. The Party of Regions will not support such a bill unequivocally, since its representatives are confident that the Russian fleet helps in ensuring the independence of Ukraine, guaranteeing with its presence the security and defense capability of its borders.

Ctrl Enter
Noticed oshЫbku Highlight text and press. Ctrl + Enter
We are
Energy blockade of the Crimea. Great damage to the economy and an attempt to genocide the populationActive phase of Sea Breeze 2013 exercises completed
Military Reviewin Yandex News
Military Reviewin Google News
110 comments
Information
Dear reader, to leave comments on the publication, you must to register.