26 2013 June
429
The day came when something was understood in the West. Even those who have never considered themselves a big fan of Russia and even more so its president have understood this. The realization that Western leaders, if they were to be put next to Comrade Putin, looks like political “wimps,” overwhelmed a certain part of the globe. Scottish journalist Gerald Warner speaks openly about the growing contempt for the "Euro-American" political class, its "uselessness" and the "parliamentary pseudo-democracy" model that has "discredited" itself. 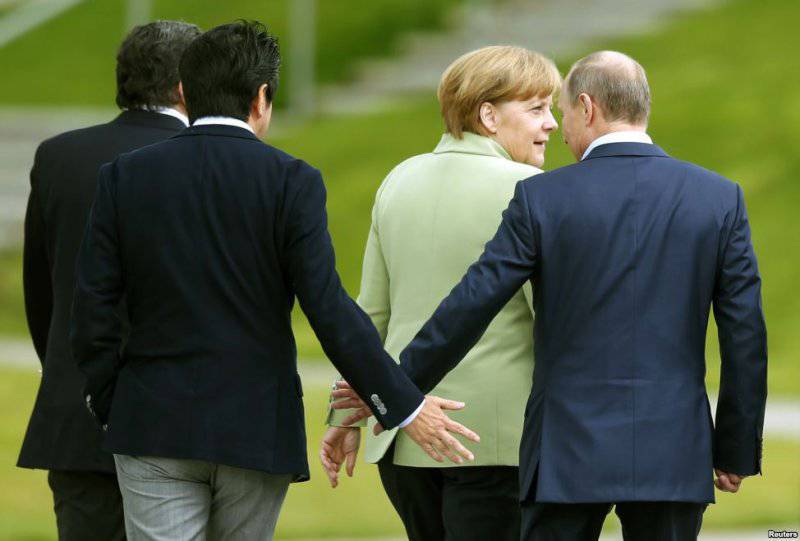 In the article "New Perception of Putin" (Scotsman.com) Comrade Warner quotes a couple of quotes from the Internet:

“I never thought that I would live to the moment when I began to say that I would rather agree with Vladimir Putin than with any of the Western leaders ...”; "We need Putin ..."

The journalist notes that the feelings expressed in these phrases are more and more often found on the expanses of the English-speaking Internet. What do their authors want to say? They thus mark a surge of discontent with the leadership and institutions of Europe and North America and at the same time demonstrate respect for the strong president of Russia.

What kind of grumblers are looking to the east? It is quite easy to dismiss them and their ilk with the help of the well-known clichés of “democracy” and building counter arguments on the fact that these very grumbling, had they ever been to try the state system of Russia, would not at all strive to live in these conditions. Pretty easy, say?

But now we have reached such a level of disappointment and contempt for the Euro-American political class, the author of the material writes that there are already serious prospects for recognizing him as worthless. The catalyst of the revolution in Western politics can be major financial disasters. Cameron and Obama keeps only apathy in power, but the economic tsunami will not only overthrow them, but also sweep

“A discredited model of parliamentary pseudo-democracy, which has long supported the scoundrels and fools in power”.

The latest public sentiment is gaining momentum in the network - where people used to share their thoughts about what they really want to scold. The enthusiasm for Putin is built on the contrast between him and the "politically correct weaklings" from the European Union and the United States. This contrast can be seen even in photos from the G8 summit.

The disgrace of “statesmen,” writes Comrade Warner, whom their PR advisors recommended removing their ties, caused only ridicule and contempt. Dads dancing in a school disco - that's how they made fun of them. Putin also participated in the farce, but as soon as he got to the point (Obama / Cameron / Hollande set out to arm the Al-Qaida militants in Syria), he answered uncompromisingly, in the Molotov style, “No!” (In the original “in Russian ":" Nyet! ")

It is not surprising, Comrade Warner notes, that the British public wanted not only the president of Russia, but also the British leaders to express the interests of their country. Today, reservations about the KGB officer Putin, who is merciless to his enemies, no longer affect the minds of many Western people: they personally observe a leader who realistically understands the interests of his country and reaches them without hesitation. He wages a war with the Islamists, and does not squander taxpayers' money to support them. He supports the third largest military budget in the world, rather than treacherously dismantling the armed forces of his homeland.

Obama made a bid for his speech in Berlin, imitating the famous speech of John F. Kennedy, but it was boring. Benghazi and PRISM, the author of the material believes, will pursue Obama the rest of his days in the White House. All Western leaders are now aware that the concept of "freedom" means an ever more dense intervention in the personal life of citizens - while completely ignoring the law.

The journalist sees irony in the fact that the matter is moving towards a new “cold war”. However, this time the West contributes to “cultural Marxism” both in its “home” and in the politics of neo-colonialism in developing countries. All this is an ideological diversion against Russia.

While Western leaders are introducing same-sex marriages to the law, Putin, at the request of the Orthodox Church, sets strict anti-homosexual laws throughout Russia. As for the idle talk about “equality,” the author notes, the Russians had enough hypocritical rhetoric on this subject in Soviet times, and now they have oligarchs - such as those in the face of bankers who occupied Europe and America.

According to Comrade Warner, the “wimp” of the West contrasts with Russia with the insanity of liberalism, cultural masochism, the extinction of the indigenous population, an aversion to family life and the adoption of hedonism instead of personal responsibility. Russia, on the other hand, seems to be the author of a courageous nation. It is governed by a strong political will, defending national interests.

The material ends on this sternly solemn note.

Article Comrade Warner received feedback. We give a few of them, the most remarkable.

“Putin is a tyrant and a very angry man. (Putin is a tyrant and an extremely evil man.)
This simple fact seems to have escaped Mr. Warner, but we should not be surprised at this, because he approves of the fascist military governments of Franco or Pinochet.
Mr. Warner builds his worldview on the choice of the irrational; he clearly states only that the state invades the people's bedrooms and prohibits freedom of speech. ”

“Yes, we certainly need Putin here in the UK. I can’t imagine another time when Britain needed a man like Putin. I wonder how he would respond to the death in Woolwich, the activities of ethnic gangs of pedophiles in Scotland, the immigrant riots in London, the suicidal policy of mass immigration and the "Chernobyl" style of destruction of our countryside? ”

“From the point of view of common sense and international conventions, Putin is right. <…>
As for the internal affairs in Russia, Putin observes and takes into account the horrors that occur in the West, in particular, in Great Britain and France.
He does not want Russia to become a Muslim state, and Christian traditions ... may well provide prevention of this. In addition, this policy will help preserve a viable demographic profile that suppresses homosexuality ... "

“... at least in the first half of the GW material (the author of the article, Gerald Warner) wanders into the swamp of his personal obsessions.
I almost represent the right-wing conservative parliamentarian: standing in a debate on Syria in the House of Commons, he says: "I have to say that the Russian president spoke for England" ... "

Observed and translated by Oleg Chuvakin
- especially for topwar.ru
Ctrl Enter
Noticed oshЫbku Highlight text and press. Ctrl + Enter
We are
Results of the week. "I'm not guilty! He came himself! ”Results of the week. “Now you are our new master!”
Military Reviewin Yandex News
Military Reviewin Google News
429 comments
Information
Dear reader, to leave comments on the publication, you must to register.