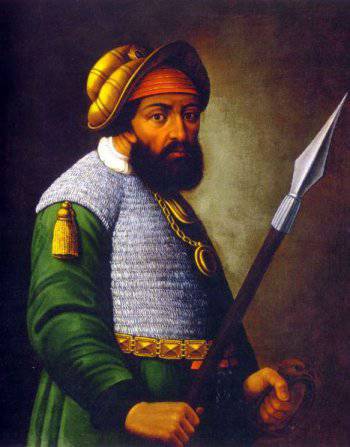 In the halls Armory the chambers of the Moscow Kremlin are always crowded. But most of the visitors are usually delayed by the huge display case, behind the mirrored glass of which as if an entire regiment of soldiers was lined up. There are horse and foot, simple warriors and governors. They are all in shiny steel armor and weapons in hand. Here are pointed helmets, "mirrors" - bibs from large plates decorated with a gold notch - and chain mail.


One of the chain mails in this showcase is different from the others in that on the left side of her breast there is a small, with a five-kopeck coin, a gold-plated copper circle, or a “target,” as such circles were called in antiquity. Looking more closely, you can read on this target a convex cast inscription: "Knia Petrov Ivanovich Shuskgov."

Prince Shuisky! Familiar last name! It was worn four years ago by eminent Moscow boyars, in the past - the princes of a small independent princedom with a capital in the city of Shuya, which was part of the grand duchy of Suzdal. One of the Shuiskys, Vasily Ivanovich, later even became for a short time the Moscow Tsar.

It seems not surprising that the ancient treasury of the Moscow kings - the Armory - kept one of the Shuisky chain mail, that it looked like a new one: perhaps it was not very much used for this beautiful and expensive thing that belonged to the same royal To a relative, there was always a caring care (each ring was thoroughly wiped and oiled).

But no, the happy look of this thing deceived us. The chain mail was in fierce battles, changed owners many times and only by sheer chance returned to Moscow and gained a quiet life of the museum exhibit. Made it really for one of the princes Shuisky - Peter Ivanovich. He was once a famous commander who participated in many campaigns, including the siege of Kazan. During the Livonian War, he was one of the main Russian governors, took a number of cities, was a governor in Polotsk. But in 1564, his troops were, as already mentioned, defeated by the Lithuanian hetman Radzivill near the town of Orsha, and Shuisky himself was killed in this battle. The body of the murdered governor, according to the customs of that time, was traded from enemies to be buried with honors at home. It was then that, apparently, for the first time, the dear chainmail of Peter Ivanovich Shuisky fell into the tsar's storerooms: after all, the time had passed when noble warriors were buried along with their weapons.

The years went by. And the young Russian state significantly expanded its eastern limits. Its composition included the immense Siberian land. This feat was accomplished by a small detachment of Cossacks led by Yermak Timofeevich, who triumphed over the forces of the Siberian Khan Kuchum, much superior to him.

With the news of the victory over Kuchum, people from Yermak arrived in Moscow, Tsar Ivan the Terrible "forgive" the Cossacks for their former "guilt" and wished even to bestow Cossacks from their treasury. Among the royal gifts sent to Yermak in Siberia, there were two chain mail, including chain mail, which once belonged to Prince Peter Ivanovich Shuisky. This gift, of course, came just by the way, and Yermak, continuing his difficult march, wore both chain mail (one on top of the other) both day and night.

The storm roared and the rain was noisy;
In the darkness the lightning shone,
And constantly thunder thundered,
And the winds in the wilds raged.
To the glory of passion breathing,
In a country of severe and gloomy,
On the wild shore of the Irtysh
Sitting Ermak, wrapped in a thought.
Comrades of his labors,
Victories and glory glory
Among the tents
Carelessly slept near the oak forests.
“Oh, sleep, sleep,” the hero thought, “
Friends, under the storm roaring,
With dawn my voice will be heard,
He is calling for glory and for death. "

Who does not know this folk song! Her words are a somewhat modified “Duma,” written about a hundred and fifty years ago by the famous poet Kondraty Ryleev. The song is about the death of Ermak. Indeed, Yermak died during an unexpected night raid by Kuchum’s troops on a Russian camp stationed on the banks of the Irtysh. Probably, he tried to escape by jumping from the shore into a boat standing on the river. But the heavy chain mails, which more than once protected him in battle, this time became the cause of his death. It is difficult even for a very strong person, which, probably, Yermak was, to jump far in fully armed, which then (all together) weighs one and a half or two. Even harder to swim, if he did not jump to the boat. Or maybe Yermak was also injured; after all, he had to run and swim, of course, under a hail of enemy arrows.


Probably, we would never have learned anything about how Ermak's mailbox came back to Moscow if the famous historian Sergey Vladimirovich Bakhrushin had not taken up the fate of this thing. It was he who suggested that precisely the chain mail that is kept in the Armory was among the royal gifts to Yermak. This thought brought Bakhrushin to find the exact same cast copper gilded target on the old settlement Isker (the former capital of Kuchum) with the inscription: “Prince Petrov Ivianovich Shuskovo”. On the reverse side are its two pins, with which the target was once attached to the chain mail. Probably, there were at first two targets on Shuisky’s mail, one on each side of the chest. One target has remained in its place until today, while the other has come off in Isker, the capital of Kuchum. But Isker was finally abandoned by the population in 1588. It means that the chain mail has been there before. And this could only happen if, after the death of the first owner, it belonged to Yermak and if Yermak's body was lifted from the bottom of the river (of course, not to give him military honors, but to take a valuable weapon). Both of his chain mail, of course, were captured and brought to the capital, Kuchum.

Yermak was so famous for his exploits that even the Siberian Tatars and Kalmyks considered his weapons magical, bringing good luck in the war. Behind one of his mail armor, which Kuchum gave to a certain murza Kaydaulu, he was given ten families of slaves, fifty camels, five hundred horses, two hundred bulls and cows, a thousand sheep.

And Kaidaul did not sell mail even for such a price.

The other chainmail, as can be seen, was donated to a local deity (such a custom - to give part of the war booty to temples - existed in antiquity among many nations of the world). Mail came to the Ostyak sanctuary Belogorie, at the confluence of the Irtysh in the Ob. There was in those days the famous oracle. Who knows, maybe the enemies, before attacking the Ermak detachment, consulted with this oracle of their neighbors, the Ostyaks (or, as they call themselves, the Khanty), and the rich gift was promised gratitude for a successful prediction?

But soon the coat of mail was taken from the sanctuary by one of the Ostyak princes. For a while this armor was in his arsenal. It is difficult to say whether it was captured by the Nenets (self-caring as they were called then) or was sold to them by the Khanty, but only in 1646 year, more than half a century after the death of Ermak, the Russian detachment sent from the town of Berezov to pacify the rebellious Nenets captured they have chain mail, on which the target with the name of Peter Ivanovich Shuisky was. Chain mail sent from Berezov to Tobolsk, and from there to Moscow. And the second time she reincarnated herself in the royal treasury. Now for a long time.

In the numerous lists of the Armory, she was given an honorable place. In the 1687 description book of the year, it is listed under the first number: “The emblem on it is the Copper Target signature: Boyar Prince Peter Ivanovich Shuisky” ...

“And according to the census ... and after the inspection, the quiver against the old census cards was not announced at the census,” some clerk wrote down with alarm. Obviously, there was confusion, as can be judged from the following entry made five years later: “And according to a non-census ... and after a visit, that pouch appeared at the Armed Chamber, the price was thirty rubles, and the second was written in the previous book”. Thirty rubles at the time was a lot of money.

In the 1711 inventory of the year, the mail was again "on inspection of the face, and on it appeared the 2 targets were silver plated." The palace officials were so anxious about the old chain mail year after year.

You have seen that this thing that seems so good seems to have endured, perhaps, more adventures than any other described in our book. Two famous commanders - a noble boyar and a simple Cossack - died in battle, having this armor on him. She probably went to battles near Kazan, and in Livonia, and in Siberia. It was kept in the arsenals of the Moscow kings, the Siberian Khan, the Khanty prince, the Nenets, and even in the temple with an oracle.

It is hard to even imagine how many hands she went through, how many human eyes looked at her with admiration, greed, hope, hatred!