The first Atlant is repaired 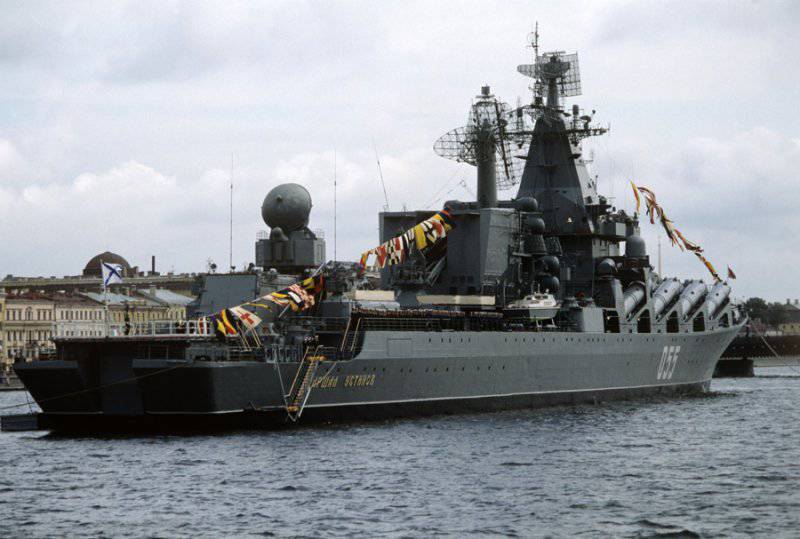 On the night of 24 on 25 on June 2013, the shipwrights of the Zvezdochka Ship Repair Center performed a docking operation to launch the Marshal Ustinov rocket of the Atlant 1164 project. This was BakuToday reported in the press service of the company.

Missile cruiser Marshal Ustinov arrived at the berth of the Zvyozdochka Ship Repair Center in June 2011 to carry out a scheduled repair. Work on the restoration of the technical readiness of the cruiser is carried out under the state contract for the maintenance of ships of the North fleetconcluded between the Ministry of Defense of the Russian Federation and Zvyozdochka TsS OJSC. Zvyozdochka shipbuilders started the dock repair phase of the ship in November 2012. Marshal Ustinov RRC was lifted from the water and put on a solid slipway base. During the dock repair phase Workers and engineers of Zvyozdochka carried out repairs of the drainage, drainage and fire protection systems of the ship, the shaft line, propellers, rocking dampers, other systems and mechanisms, and repairs and painting of the outer hull and tanks were carried out.

The finale of the dock stage of the repair of the cruiser was the solemn ceremony held on June 20 and dedicated to the upcoming launch of the ship. RRC "Marshal Ustinov" was the first ship of the project 1164, a scheduled repair of which is performed on the "Zvezdochka". As the general director of the Ship Repair Center Vladimir Nikitin said during the ceremony, after the Marshal Ustinov RKR, other ships of this project - flagships of the Black Sea and Pacific Fleets, the Moskva and Varyag missile cruisers - will undergo similar repairs.

The docking operation for launching the cruiser into the water was performed on the night of 24 on 25 June. The cruiser was removed from the dock and moored at the shallow embankment for carrying out outfitting and modernization works. Severodvinsk shipbuilders have to replace over 50% of the ship’s cable routes, upgrade the missile, communications and reconnaissance complexes. Repair work on the cruiser will be completed within 2014 of the year. Modernization of the missile system of the ship will be performed in 2015 year, after which RKR Marshal Ustinov will return to the naval battle formation.

RRC "Marshal Ustinov" (eg. 1164 "Atlant") was laid at the plant. 61 Communal in Nikolaev in October 1978 of the year. In September 1986, the naval flag was raised on the cruiser and the ship became part of the Navy. In March, the 1987 of the year RRC "Marshal Ustinov" made the transition from Sevastopol to Severomorsk and took the place in the battle formation of the Red Banner Northern Fleet.

During service, the cruiser has repeatedly been recognized as the best surface ship of the Northern Fleet. Marshal Ustinov has a rich history sea ​​trips. The cruiser made transatlantic campaigns with calls at the ports of Great Britain, the USA, Canada, Syria, Algeria and other states. The ship received on board high-ranking military and diplomatic workers of foreign countries, including crowned heads.

Over the 26 years of service, RKR Marshal Ustinov performed over 370 combat exercises using missile, artillery and anti-submarine complexes. During the cruises, the cruiser passed almost 150 thousands of nautical miles, spending 1089 days on the high seas. According to information from open sources, the displacement of the Atlant cruisers is 11380 tons, the length is 186 meters, and the maximum width is 20,8 m. The cruiser is capable of speeds up to 34 nodes. Crew - 510 man. The main strike weapons of the cruiser are the 16 launchers of the P-500 “Basalt” missile complex. In addition, the armament, artillery and missile air defense systems, torpedo tubes and rocket launchers for deep-seated bombs are included in the ship’s weapons complex.

Ctrl Enter
Noticed oshЫbku Highlight text and press. Ctrl + Enter
We are
The fleet's long arm: the future of the ships of the ocean zone
Military Reviewin Yandex News
Military Reviewin Google News
38 comments
Information
Dear reader, to leave comments on the publication, you must to register.