June 25 - Day of friendship and unity of the Slavs 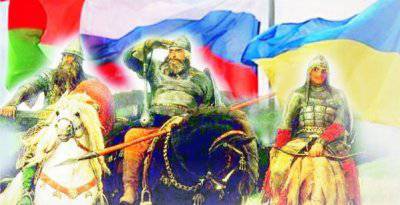 At present, about 270 of millions of Slavs live in the world, most of which are representatives of the Russian people, including representatives of the Belarusian, Ukrainian and Great Russian subethnos. We are one people who grew out of a common cradle - Ancient Russia, united by a thousand-year-old Christ faith and suffered history struggle for survival with an external enemy. Russia is more than just a territory or any state or interstate association. According to His Holiness Patriarch Kirill, “Russia exists, there is historical Russia - a completely original phenomenon in the spiritual and cultural sense. In order to preserve ourselves, we must preserve the spiritual and cultural bed in which our Fatherland was born, brought up and strengthened. And no matter how anyone treats the Orthodox Church, it is completely obvious that this bed was formed by the Orthodox Church. In this system of values, which determined the worldview of the people, our people were brought up, who endured all the historical trials, all the sorrows, all the wars. ”


Today, the Slavic world is in a state of crisis. And this crisis is most acute in the Russian world. For centuries, a single Russian people today is affected by the virus of separation. We are divided not only on the basis of nationality, but also subject to ideological, political and, most importantly, human disunity within ourselves. Our internal disunity is actively fueled from the outside: today we are trying to convince us that historical Russia does not exist, and distinctive national “identities” live on its territory - Cossack, Ukrainian, and Siberian peoples. The attack on Russian self-awareness occurs at a deep cultural level, they try to tell us a completely different, alien way of thinking and life, to change the perception of the world, forcing black to be white and black for white, replacing the age-old values ​​of family, faith, Fatherland with pseudo ideals of consumption and militant individualism. What can we oppose to attempts by external forces to force us to renounce the status of a great civilization? “Today, the struggle of the Slavs for survival is, first of all, an internal struggle, it is the opposition of unity to division, creation to revolution and rebellion, like-mindedness to disputes and quarrels. We do not have the right to further disengagement, only in the ideals of the age-old unity is Russia's last historical chance.

And again we will cite the words of the primate of the Russian church, expressing the patriotic aspirations of each of us more accurately and succinctly: “You can only be called Russia - and stop being Russia. This is the worst. In order for Russia, and to put it more broadly, Russia not to remain only a geographical name, we must all work together, rejecting all the prejudices that were driven into our heads in atheistic time. May God bless us all to grow in love for our Fatherland, in a fervent desire and desire to preserve the values ​​that came to us from the beginning of our history and which formed Russia and Russia. We will be strong with this. "
Ctrl Enter
Noticed oshЫbku Highlight text and press. Ctrl + Enter
We are
Chief Kiev "Christian" Filaret made threats against Patriarch Kirill
Military Reviewin Yandex News
Military Reviewin Google News
173 comments
Information
Dear reader, to leave comments on the publication, you must to register.