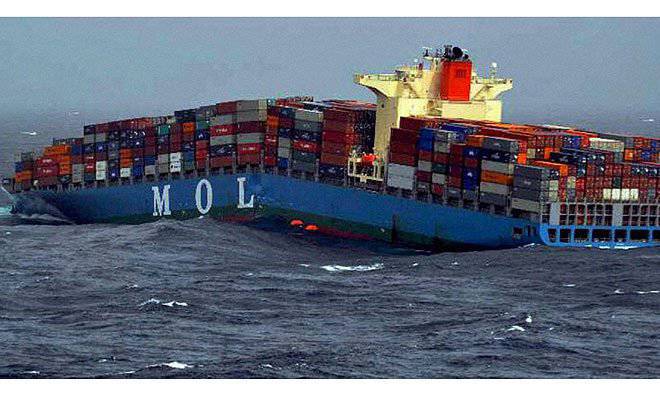 'MOL Comfort sank for reasons that weren't clear yet. He went from Singapore to Jeddah, and then had to proceed to Northern Europe. Containers are drifting at the crash site, and the crash itself will deal a severe blow to the container transport sector and the entire maritime industry.

Assessing the scale of the consequences is difficult, even impossible, not to mention the consequences themselves. This is the first time that a modern ocean liner container ship (built in Japan!) Sank in the ocean, breaking in half like a poorly built and operated dry cargo ship or an aged coaster. Previously, nothing of the kind happened, and no one thought it was possible, even theoretically. It just could not happen, but nevertheless, it happened.

From the translator: possible causes of the disaster and additional photos - on the website http://www.vesselfinder.com/news/1223-UPDATE-MOL-Comfort-Sank