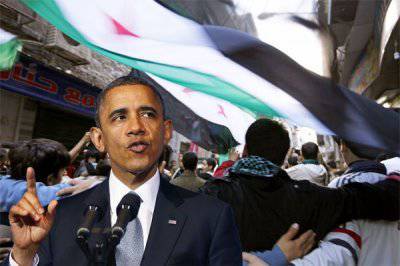 After all, after a short absence and some informational hunger, it is great to plunge into the flow and all the diversity of news crowded on the Internet. I have noticed long ago that it is possible to see some kind of integrity of the events taking place and make some more or less unbiased conclusions after a break and, as if abstracting myself from the emotions boiling on the forums.


But the most interesting and pleasant thing happens when some short news gives an exact cut of the emerging trends in the outline of certain events. The theme of Syria and the massacre unleashed there against the sovereign state and its legitimate government has been stirring people's thoughts for more than two years, and we all try to grasp, feel, understand and predict with increasing attention the direction of the scales of Fortune. Sometimes, in search of confirmation of such tendencies, it is necessary to expel the mass of news, but it happens that one short, but capacious note on the content clearly highlights the very essence of what is happening and emerging, as it is fashionable to say - a trend.

Some time ago I laid out a publication on the outlined plans of the Syrian government regarding the country's postwar future, its restoration, its further development and its further political aspirations. In short, the essence came down to who Syria intends to be friends after the war and its understanding of fraternity and gratitude to those who came to know how much time for this country as a faithful ally and friend. And we can proudly state with you that Russia has passed a very difficult and important exam with honor, which filled the eyes of the gurgling people about democracy and the value of human life with the democrats of the world with sand. Fingers will not show - all the recent events around Syria have clearly shown who is XU.

And now about the essence of the note itself, which prompted me to express my joyful forebodings from the fact that Syria, in the end, would shake off all this lousy rabble, which had been turned on by the goodwill from the West.

Joint statement of the head of the European Commission Z.M. Barroso and EU High Representative for Foreign Affairs and Security Policy Catherine Ashton clearly showed where the whole situation is moving in Syria. At the very beginning, duty words that are boring to the edge of the teeth are heard.

... “We offer a comprehensive EU response to the deteriorating situation in Syria and its neighboring countries. The international community cannot remain indifferent in the face of the most dramatic humanitarian situation of the past decades. Our main priority is the promotion of a political settlement aimed at ending violence and human rights violations, ”stressed Barroso, ...

which, like a spell, go from one statement of this kind to another. And even the following customary formulations, designed to emphasize the "comprehensive concern of the EU and the United States about world peace" sound not new, namely:

... "We must build on the Russian-US initiative to resume international negotiations based on the Geneva Communiqué, adopted in June 2012, and convene a Geneva-2 conference as soon as possible. The EU is ready to provide all the necessary support, "...

But, then come the words that testify to the perversity of the understanding of caring for the people of Syria and the value of human life,

... According to her, "the EU is doing everything possible to help" Syria, focusing on the "search for a political solution", which will lead to the formation of a "united and democratic Syria." In particular, the European Union intends to continue to pay attention to ensuring access for humanitarian organizations to “areas affected by hostilities” and “loosen sanctions against the regime in order to support civilians” ...

You stop wondering why in the EU a pedophile who has tortured two girls to death gets a conditional sentence and even this is considered to be an undeserved punishment from them. Here, especially express themselves words

... "to loosen sanctions against the regime in order to support civilians" ...
!!!

Now explain to me, dear colleagues, when, at what instant, this whole European brethren, led by Uncle Sam, turned from a bloodthirsty gathering of politicians into the most holy meeting of democracy and humanists who saw in Asad (and his “bloody regime”) the defender of his people, and now with their heads held high, with speeches about humanism and all-round assistance to the unfortunate Syrians, declaring their desire to end the slaughter that they unleashed, inspired by the bloodshed in Libya.

Now the words about the provision of humanitarian aid to the European Union of Syria have already sounded in the amount of 1 billion 250 million euros! When they did, do some sort of good ...! Now they are for this "help" will demand compensation and all the goodies from Assad, when the restoration of the country begins.

... In addition, the EU will pay special attention to supporting refugees and fighting European mercenaries taking part in hostilities in Syria ...

It turns out that ... But they did not know and did not assume that there, in Syria, against the Syrian people and Assad, the banal mercenaries are banditing - "EUROPEAN"! So, accidentally wandered into Syria ...

Well, now - the moment that speaks about the turn of all these talkative hypocrites on one hundred and eighty degrees. As Zadornov says in his speeches, “Get ready! Just don't laugh, otherwise I myself will laugh ...! ”

... In April of this year, the EU Council loosened the oil sanctions against Syria, allowing the import of oil and oil products from the SAR and the investment of the Syrian oil industry ...

And even here - they misinterpreted, as usual and mean, as always. This, apparently, the sale of the same "European mercenaries" stolen Syrian oil, now referred to as a good step and help the Syrian Republic.

Nevertheless, despite all these verbal quirks and the desire to preserve the “face of the face” in front of the world community in a stalemate for themselves, it is perfectly clear that the above-mentioned duet recognizes the failure of all that inhuman and cynical game that was unleashed against Assad and the entire Syrian people .

Of course, the war will not end today or tomorrow, but the fact that things are moving towards a successful outcome for us is a visible fact. In the once monolithic and cohesive NATO choir, their tenor abilities lose more and more voices. Then Germany refused military assistance to the militants, then Italy categorically refused, then Erdogan announced the closure of the supply corridor weapons for the Syrian "opposition". So soon there will be one shabby cock left from the choir, who will wheeze like an anxious Mr. McCain.

Well, I want to say ... To wish Assad and his Companions, all the sensible and courageous Syrian people to kick out all the hired trash that pinned them and the speediest restoration of the country in a close and tried and tested friendship with us - with the Russian people.

And I will not restrain myself and add that the guys are lucky that our state is now ruled by a person who managed to instill in us a faded feeling of pride for his country and for the fact that Syria deplores in that terrible meat grinder that was imposed on it, not without the help of Russia. And he - Vladimir Vladimirovich - managed at the summit to confront the whole crowd of shtatovskih sixes and MAKE them understand the position of Russia and accept such statements, which I brought to you.

Ctrl Enter
Noticed oshЫbku Highlight text and press. Ctrl + Enter
We are
About Stalin and KhrushchevWhat you didn't want to know about England
Military Reviewin Yandex News
Military Reviewin Google News
31 comment
Information
Dear reader, to leave comments on the publication, you must to register.