The main patron of the cold war

26 2013 June
7
In 1961, the NATO small-caliber cartridge 5,56x45 was adopted by the NATO countries, which had a tremendous impact on the subsequent development weapons and the creation of such cartridges in many countries of the world.


In 1950-s. US forces have launched a number of special programs, the main tasks of which were:
• improving the effectiveness of small arms;
• reducing the number of models of small arms that are in service;
• the creation and adoption of a lighter type of weapon (compared to existing weapons caliber 7,62 mm), with a large ammunition;
• the creation and adoption of an effective weapon-cartridge system. 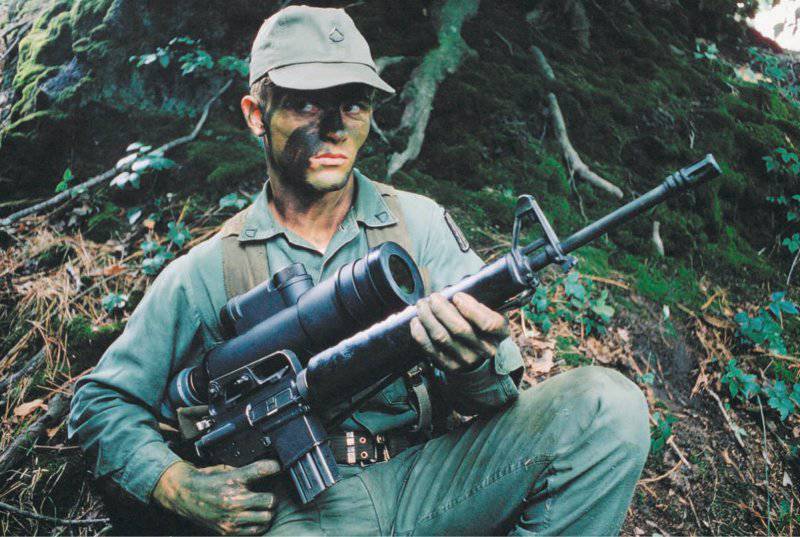 US Army Soldier With M16A1 Rifle

The implementation of these programs was carried out within the framework of the planned re-equipment of the countries members of the NATO bloc with more effective small arms. The main attention of specialists was directed to the development of a new effective cartridge, the tactical and technical characteristics of which were to meet NATO standards:

600 m distance
• the maximum value of the standard deviation of the vertical and horizontal should not exceed 225 mm (for regular and armor-piercing bullets) and 340 mm (for tracer and other bullets);
• the mid point of contact for cartridges of any type should not deviate vertically more than 300 mm from the midpoint of the main cartridge;

570 m distance
• bullets of a new cartridge (with the exception of tracer) at 21 ° C ambient temperature should pierce through a steel plate 3,5 mm thick from mild steel of SAE 1010 or SAE 1020 types, 55-70 НРС hardness;
• each cartridge must have a muzzle energy not less than 1500 J;
• the cartridge must provide bullets with a speed that meets energy requirements when using bullets of nominal mass;
• The average pressure in the chamber should not exceed 330 MPa at 21 ° C.

The main small arms of the American army during the Second World War carbine M1 "Garand" chambered for .30-06

National developments of foreign firms caliber cartridges up to 5,56 mm

The result of these works was the creation of a new cartridge, which had a great influence on the subsequent development of weapons and ammunition, both in the United States and in other countries. It was a cartridge that is currently known as the NATO 5,56x45 mm cartridge.

It should be noted that the creation of the NATO 5,56X45 mm cartridge was preceded by a series of research projects aimed at creating small-caliber ammunition cartridges up to 5,56 mm, which were carried out by weapons companies of several countries.

Separate characteristics for some of the experienced cartridges developed in the process of R & D, are presented in the table 1.

To confirm the correctness of the choice of cartridge 5,56х45 mm, NATO military experts conducted an analysis of the weapons of soldiers 1950, 1960, 1970 and 1990. the rifle-cartridge small arms system.

The results of the analysis are presented in the table 2.

Comparison of the data shows the undoubted advantage of the rifle - cartridge complex of the 5,56 caliber mm.

Currently, a number of 5,56xXNNUMX mm cartridges, which are manufactured by various companies, have been developed and put into service abroad.

Cartridges 5,56x45 mm are manufactured both in accordance with the NATO-STANAG 4172 standardization agreement, and in accordance with US standards. This is explained by the fact that the cartridges are designed for firing weapons with different pitch cuts: for the NATO 5,56x45 mm cartridge, the thread pitch is 178 mm, and for American-made cartridges, 305 mm. This is due to the fact that for sustaining a heavier bullet of the 5,56x45 mm NATO cartridge, a large rotational speed is required, and for a lighter bullet of the American cartridge, at a high rotational frequency, re-stabilization is observed.

The main tactical and technical characteristics of the 5,56x45 mm NATO cartridge are presented in the 3 table.

Carabin M1 "Garand" on the machine for adjustment 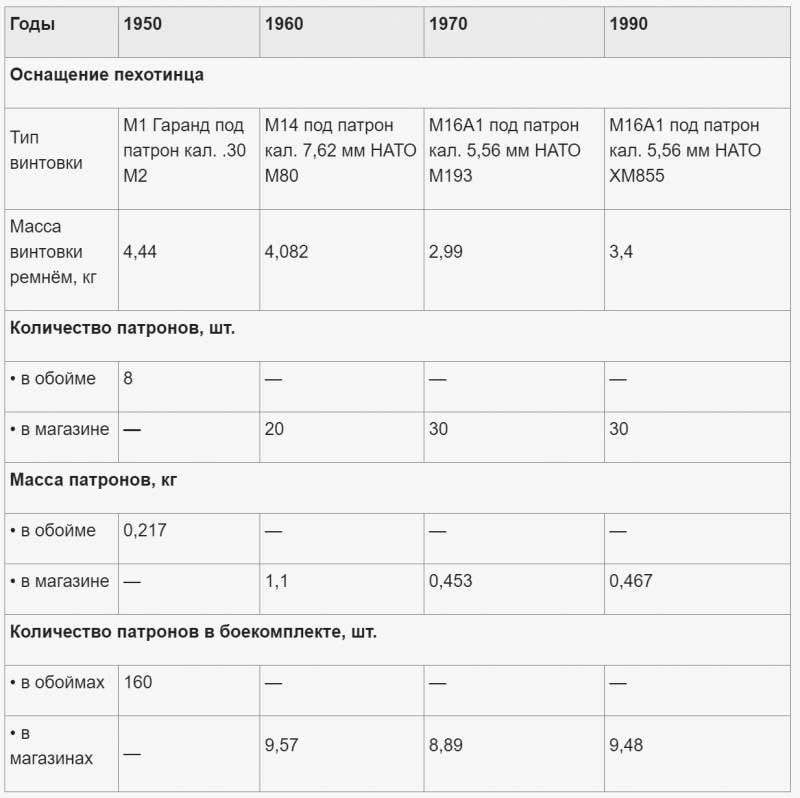 Data on the hardness of steel cores bullets 5,56 mm are presented in the table 5.

The test results on the accuracy of 5,56 mm cartridges are presented in the table 6.

The US Marine Corps tested the accuracy of the 5,56 mm firing of ammunition for a rifle-cartridge complex.

The test results for one of the samples are presented in table 8.

The bullet dimensions of this cartridge were: length - 18,9 mm, the length of the leading part - 6 mm, tail length - 2,2 mm. The head part of the bullet has the form of a blunt came to life: radius - 36 mm, diameter of the top - 1,14 mm Depending on the year of manufacture, the bullets differ in the shape and angle of the tail section and the constructive appearance of the shell.

The shell material is tompack, thickness is 0,5 mm, the core is made of lead with the content of 10% antimony. Because of the small radius, the bullets came to life, the distance from the center of gravity to the center of pressure was quite large, which, combined with high speed, makes it possible for the bullet to become unstable when it encounters an obstacle and, especially, when penetrating a soft medium. The bullet has a high lethal effect. 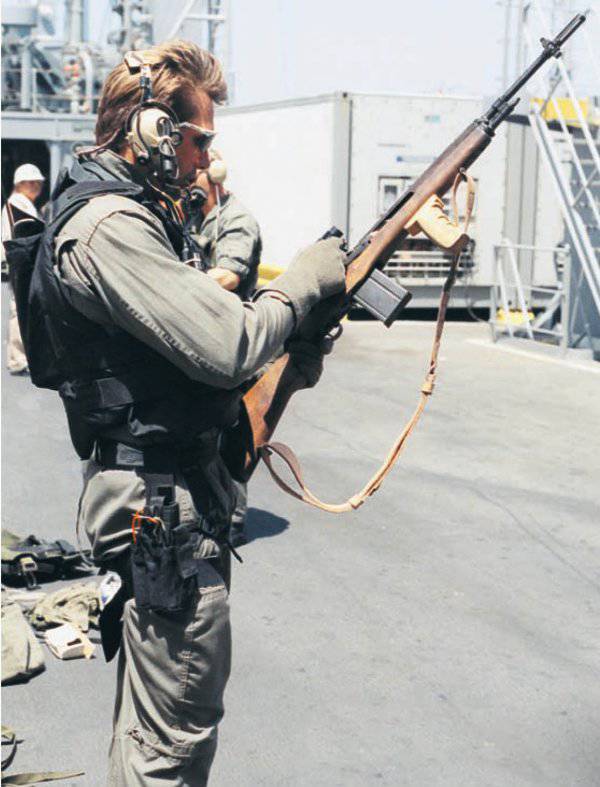 Cartridge Cartridge 5,56 mm Traup М196 with a tracer bullet has a tracing distance of 450 m. The mass of the bullet is 3,4 g, length - 22,3 mm, length of the leading part - 9 mm, radius of the ogival part - 36 mm. Tompak shell 0,5 mm thick contains a lead core, igniter and tracer compositions. The tracer is closed with a white plastic gasket. The tip of a bullet at a length of 6,5 mm has a dark red color (depending on the manufacturer, the tip color may have different shades). Gunpowder tubular, mass 1,65 g, provides speed 980 m / s.

Cartridge Cartridge 5,56 mm Rifle Gremade M195 is designed for firing rifle grenades. The cartridge has an elongated sleeve on the 3 mm, the sleeve is crimped in the form of a star with folds. Cartridge length - 48 mm. The mass of the propellant charge, consisting of disc-shaped powder, is 0,48 g. The top of the cartridge is colored black for the length of 3 mm and a corrugation is applied on the cartridge sleeve at a distance of 7,5 mm. This cartridge is manufactured by Twin Cities arsenal (Twin-Cities). At the bottom of the liner applied stamp TW.

Cartridge High Cartridge 5,56 mm High Pressure Tast M197 has a bullet M197 and a powder charge with a mass of 1,59 g of disc powder. The average gas pressure when using this cartridge is 4,55 bar. The cartridge case is nickel plated, although there are batches of cartridges with cut sleeves. The bullet and bottom of the cartridge case are colored purple-red. 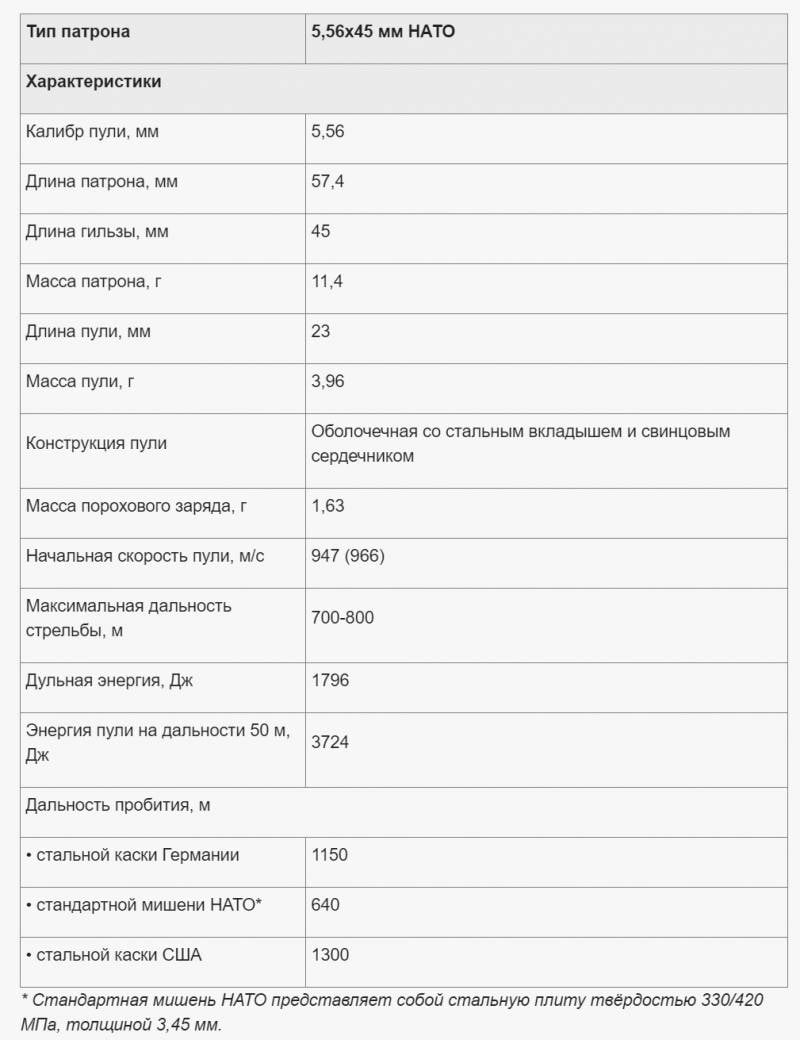 Cartridge 5,56 mm Dummy Inert М232 demonstration cartridges are equipped with an inert substitute for powder charge and correspond to the М193 cartridge by their overall and mass characteristics. The sleeve is painted black. An additional feature of this cartridge is a crimped groove on the cartridge case.

Along with the US firms, the cartridge 5,56x45 mm, corresponding to American standards, manufactures a number of European firms. 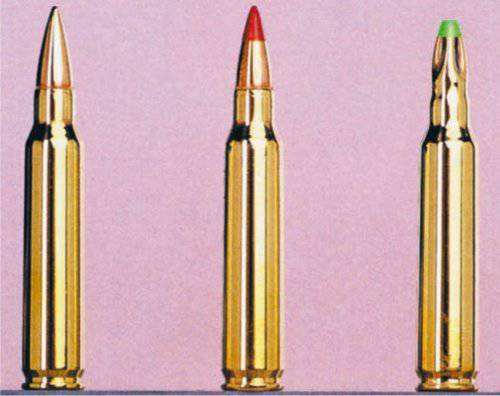 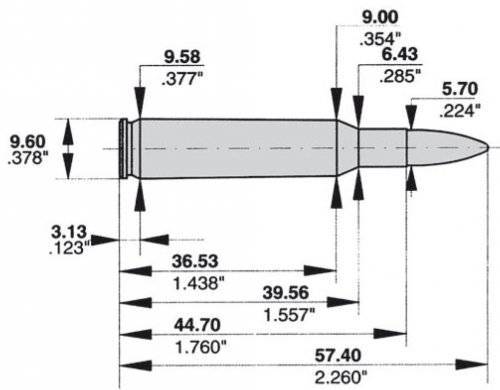 Scheme of the NATO 5,56X45 mm with dimensions in millimeters and inches

The 5,56x45 mm P112 cartridge from FN (Belgium) is equipped with a P112 heavy bullet and is intended to defeat lightly armored targets.

At the 178 mm rifling pitch, the bullet pierces the chromonica-left steel 6 mm thick at a distance of up to 140 m.

The 5,56x45 mm SS 109 cartridge from FN (Belgium) is equipped with a P112 heavy bullet and is intended to defeat lightly armored targets.

At the 178 mm rifling pitch, the bullet pierces a plate of chromium-nickel steel 6 mm thick at a distance of 140 m.

Specifications of some 5,56x45 mm ammunition 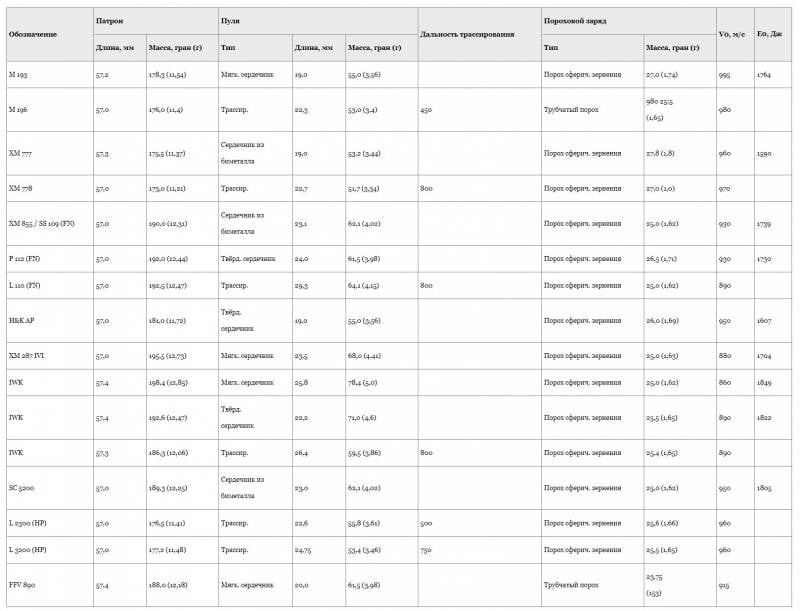 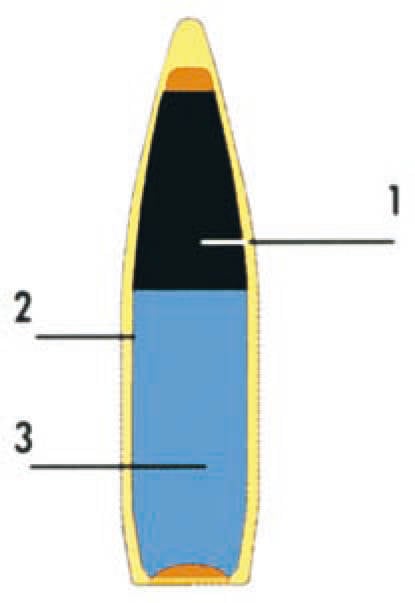 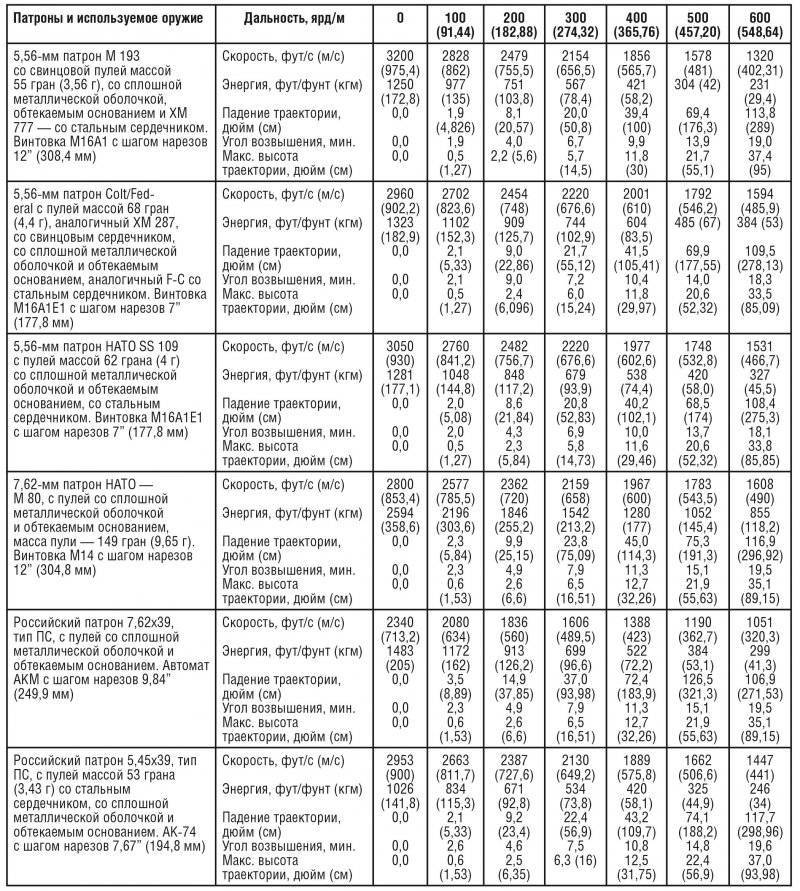 Some firms in European countries develop and manufacture 5,56x45 mm cartridges in accordance with the NATO-STANAG 4172 standardization agreement, but they do not meet the standards of the US Army.

For firing weapons in increments of 1 / 9 ", the companies have developed a series of 5,56x45 mm ammunition, which differ in the design of bullets. 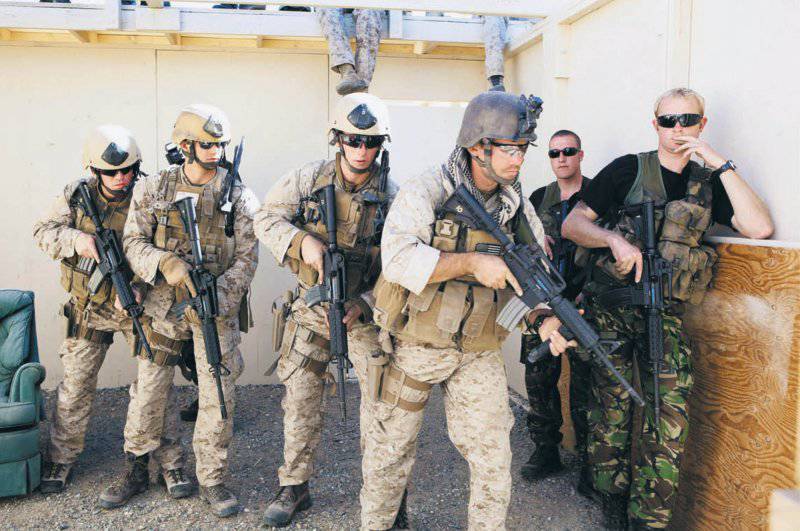 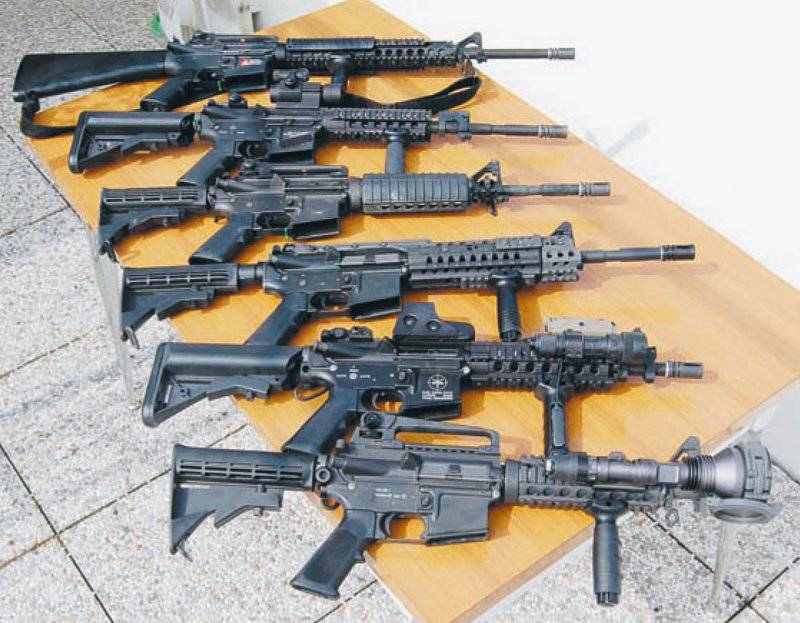 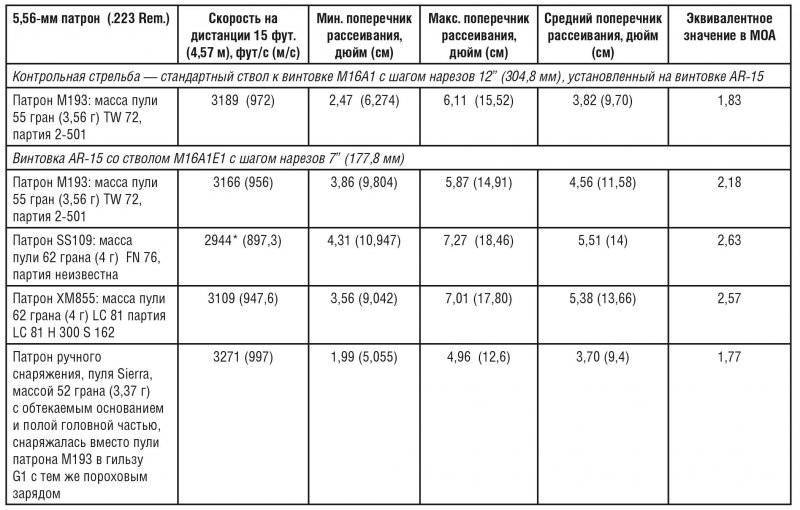 Measurement of the hardness of steel cores of 5,56-mm bullets of rifle cartridges

* Samples were cut, fastened with epoxy, polished with a micron 0,3 with alumina and etched. The load on the pyramid 1000 h. The results are average values ​​obtained from three measurements at the tip, at the center of gravity and at the base of the core.

The overall mass characteristics of the cartridges of these models are presented in the table 9.

Hirtenberger Patronenfabrik has also developed a cartridge with three models of G 2300, G 3100 and G 3200 tracer bullets:
• model bullet G 2300 in its parameters meets the requirements of the American standard;
• the G 3100 bullet model has a tracer composition with a low burning rate and provides maximum light intensity at a distance from 120 m to 500 m, the bullet shell is made of bimetal, the top of the bullet is colored red;
• the G 3200 bullet model has equipment similar to the FN L 110 bullet equipped with a tracing distance of about 750 m at the initial speed of 960 + 15 m / s; bullet length - 24,75 mm; weight - 3,42 g; powder charge mass - 1,65 g; bullet shell made of bimetal. The tracer is protected by 0,05 mm thick brass foil. The top of the bullet is painted white.

Mauser-IWK (Germany) has developed a series of significantly improved 5,56x45 mm cartridges equipped with soft and hard core bullets, tracer bullets and training cartridges. Compared to the US, the bullets of these cartridges are longer and are fired from the barrels with the 1 / 7 "and 1 / 9" rifling pitch (American ammunition is fired from the barrels with the 1 / 12 rifling pitch only). deep-drawn sheet metal clad with nickel (Mauser-IWK’s bullet shell is 0,25 mm and M 193 is 0,5 mm). 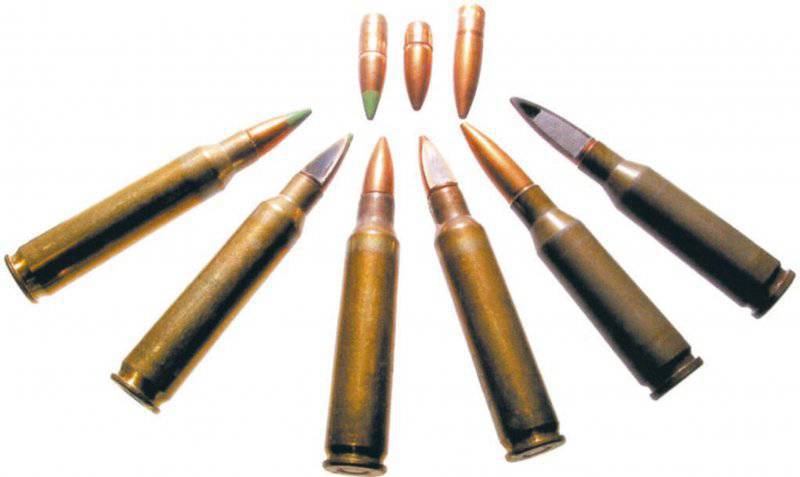 Cartridges 5,56x45 mm NATO and bullets to them

The results of the test ammunition for accuracy

The company Dynamit Nobel AG (Germany) has developed a training cartridge 5,56x45 mm, the bullet of which consists of a metal case with a through axial bore; the bullet has a detachable plastic top; bullet weight - 2,8 g, length - 21,75 mm (length of the metal part - 15,5 mm), mass of powder charge of the cartridge - 1,39 g.

The company FFV (Sweden) has developed two models of bullets for the cartridge 5,56х45 mm:
• a “humane” soft-core bullet with a dull tip and having a center of gravity, almost coinciding with the center of pressure, as a result, when the bullet penetrates the soft target, the loss of stability begins a few centimeters further; bullet weight - 4,0 g, length - 20 mm, radius of the top - 1,3 mm;
• a bullet with a core of two metals, the mass of the bullet - 4 g.

Societa Metallurgica Italiana (SMI) (Italy) developed a cartridge with a solid-core bullet in a lead shirt having a length of 15 mm and a mass of 1,66 g, bullet length - 22 mm, length of the leading part - 9 mm, weight - 3,3 g, initial speed - 940 m / s. The bullet has a bimetallic shell, the top of the bullet at the length of 5 mm is painted black.

The firm Santa Barbara (Spain) has developed and produces a new cartridge for self-defense weapons in extreme conditions of caliber 5,56x45 mm. Cartridges are also intended for use in guard services. These are shot cartridges with a cylindrical sleeve, having an effective firing range of - 10 m. However, it should be noted that the results of shooting shot cartridges from rifles with rifled barrels are unsatisfactory.

European companies pay particular attention to the development of training (practical) 5,56x45 mm cartridges, which provide soldiers with training in the process of firing without dropping dangerous parts from the barrel. When using a weapon with a muzzle can be fired with practical ammunition in a queue. The range of fragments that are not dangerous to humans is about 3 m.

Constructive scheme of cartridges and bullets for cartridges:

In accordance with the STANAG 4172 standard, NATO 5,56x45 mm cartridges have a brass sleeve, but firms supply pilot batches of lacquered and phosphated steel cartridges, anodized aluminum and plastic sleeves. 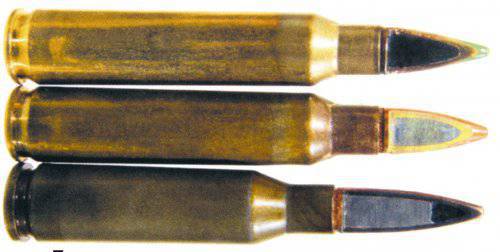 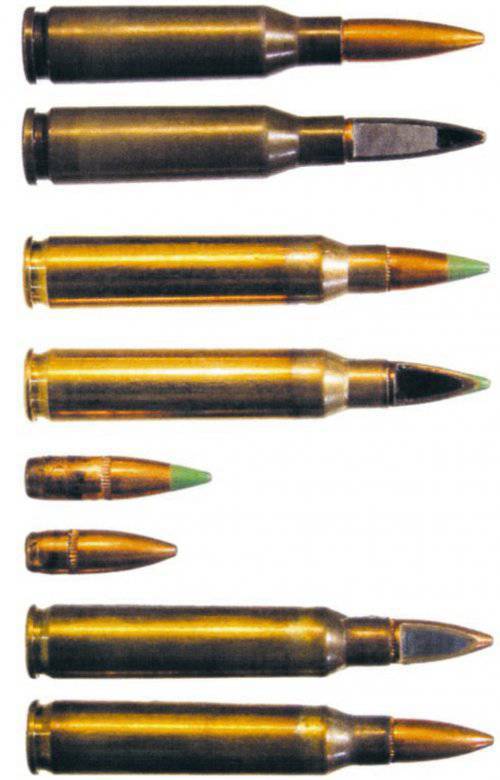 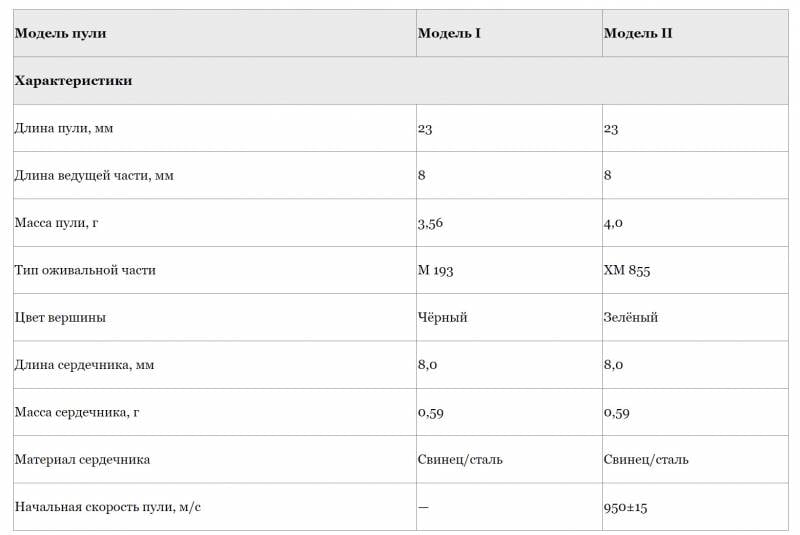