25 2013 June
9
The system of anti-aircraft weapons on the artillery systems is assigned the task of destroying air targets that managed to break through other echelons of defense. This fact has a great influence on the appearance of such artillery systems: for reliable destruction of a high-speed target at a relatively short distance, they must have a high rate of fire. In this case, meet the anti-ship missile or similar arms A large number of projectiles fly out, which in its effect resembles the action of a shotgun. The highest rate of fire have a system with rotating blocks of trunks (another name - the Gatling system). However, they are not without flaws. One of the most important is the relatively long time required to reach the required rate of fire. Because of this, in the first fraction of a second the gun shoots with insufficient efficiency, which reduces the likelihood of hitting the target. 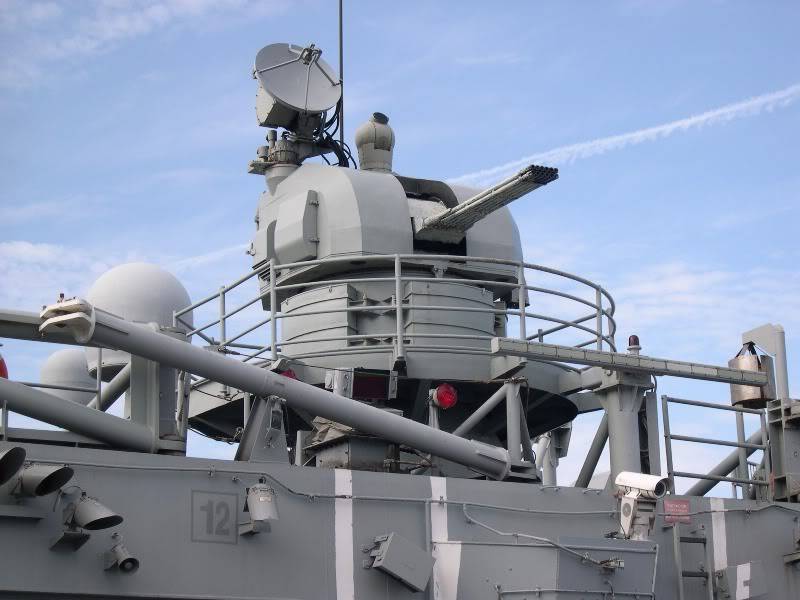 In the first half of the seventies, the Spanish company FABA (Fábrica de Artillería Bazán) proposed its own way of solving the existing problem. The new concept of the anti-aircraft artillery complex (ZAK) to some extent repeated some designs of previous years, but it also included several original solutions. Spanish engineers have concluded that it is necessary to abandon the rotating block of barrels. In their opinion, the advanced anti-aircraft installation should have been equipped with several single-barrel guns with their own automation. Using a single ammunition system and targeting mechanisms, such an anti-aircraft complex could be effective at the level of Gatling guns. At the same time, he would have been deprived of congenital defects of artillery with a rotating block of barrels.

The multi-barreled system was called Meroka - an abbreviation for the term Mehrrohrkanone (German: “Multi-barreled gun”). Oerlikon automatic caliber 20 caliber millimeters with a barrel 120 caliber length were selected as the main element of the artillery installation. The guns were assembled into a single unit, in two rows of six. At the same time, the receiver boxes were located literally side by side with each other. Due to this, it was possible to significantly reduce the size of the whole ZAK, and in addition, to facilitate guidance, since the dense placement of guns helped reduce the spread of shells in flight. It is worth noting that to increase the accuracy of shooting, the FABA staff used another interesting solution: right behind the muzzle brakes of the guns there is a special sliding band that holds the barrels in a stable position. It can move closer or farther from the breech, which slightly changes the projectile spread. Artillery units are mounted on a turntable and are covered from above with a bullet-proof armored housing with service hatches.

The specific mutual arrangement of the guns required the creation of an original ammunition system. Below the level of the cannon block inside the turret of the Meroka unit, there is a ring-shaped magazine, in several sections of which 720 shells can fit. Ammunition is fed to the guns using detachable-link metal bands. It is easy to calculate that one store is only enough for 60 shots from each gun. The ring magazine is recharged through three nodes on the outside of the unit base. Special boxes with new ribbons are installed on them, after which the automatics themselves transport the shells to the store. Cartridges are shot through a common outlet on the left side of the tower. For the firing of the Meroka cannons, any available projectiles compatible with them can be used, however, sabot tracer ammunition with a detachable tray is recommended. 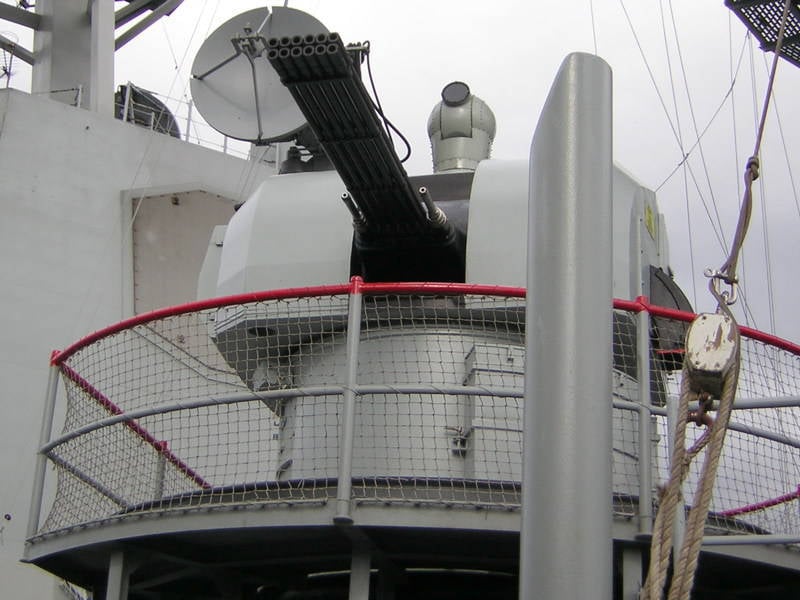 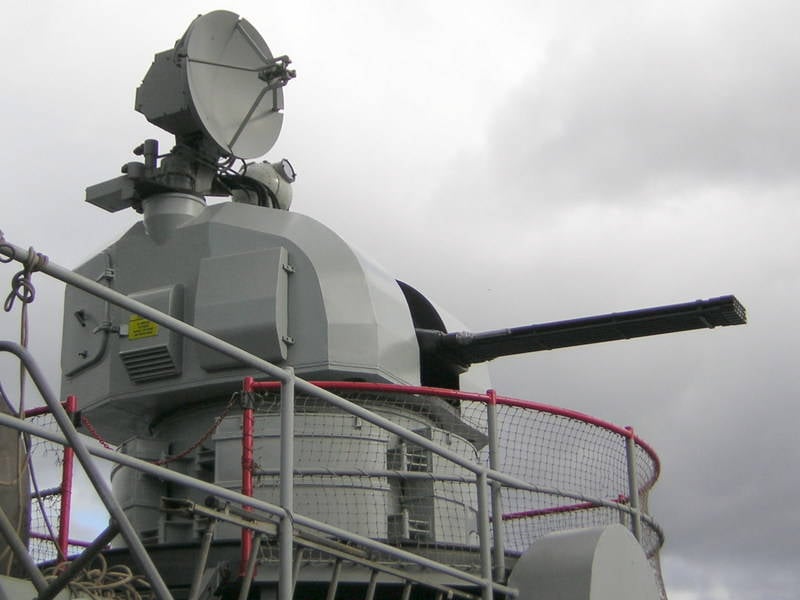 On the roof of the tower there is a radar antenna and an optical-electronic unit. The fire control system for the anti-aircraft artillery complex Meroka was created by the American company Lockheed Martin. The radar detection RAN-12L allows you to "see" targets at a distance of 12-15 kilometers, depending on their EPR. After the target is detected, the information is transmitted to the ballistic computer and a special threat assessment unit. The latter, based on information about the movement of the target, calculates its danger to the protected ship. At a distance of about five kilometers, the tracking radar AN / PVS-2, transmitting data to the automatic guidance system, is turned on. If necessary, an optoelectronic system can be used for detection and targeting. There are automatic and manual fire control modes.

The design of the Merok gun turret allows you to direct guns to any angle in the horizontal plane (except for sectors covered by the ship's structure) and vertically in the sector from -15 ° to + 80 °. The theoretical rate of fire of this anti-aircraft system is equal to 9000 per minute shots, but in practice the fire is fired at a much lower rate. In order to avoid throwing trunks and inaccurate shooting 12 guns are firing in turns. The recommended shooting mode is a variable salvo from several barrels at the same time. In this case, the automaticity of the guns works with a difference in some part of the cycle: when half of the guns are already being reloaded after the shot, the other one shoots. Thus, the actual rate of fire does not exceed 1450-1500 rounds per minute or 2-3 volley 12 rounds per second.

At first glance, due to the lower rate of fire, the Meroka anti-aircraft artillery complex is inferior to other systems of a similar purpose. However, the original location of the trunks and the minimum possible deviation when shooting provide a sufficiently high accuracy. According to calculations, in order to destroy one subsonic anti-ship missile, the Meroka complex must make no more than 10-12 short bursts. With this method of firing, one store on 720 shells will be enough to hit five or six enemy missiles. A sub-caliber projectile with an initial velocity of about 1450 meters per second can effectively hit aerial targets at distances of up to two kilometers. The high initial velocity and shape of the projectile to some extent facilitate the work of the ballistic computer, since the projectile flies to the maximum effective range almost in a straight line, with a minimum decrease. 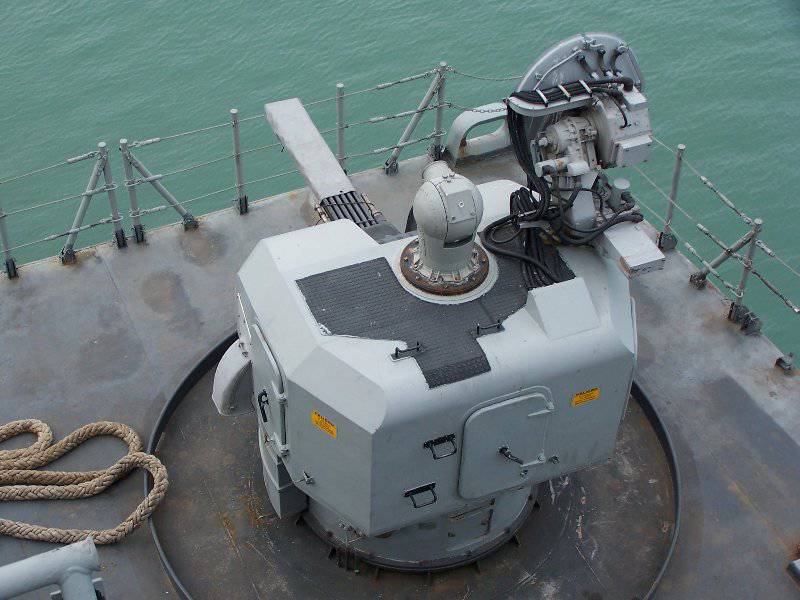 Despite the original look and non-standard approach to providing characteristics, ZAK Meroka completely satisfied the customer and was adopted in the mid-seventies. Currently, such systems protect a large number of large ships of the Spanish Navy. This is the light aircraft carrier Príncipe de Asturias (four ZAK), five frigates of the type Santa Maria (one each) and five frigates of the type Álvaro de Bazán (one each). Probably, Meroka will be installed on new ships, which are only planned to be built.

In the early eighties, ground forces became interested in the newest anti-aircraft artillery complex. In the course of processing for use on earth, the Meroka system underwent several major changes. The modified and reduced turret was placed on the towed wheeled chassis, the operator’s cabin was added to the rear of the tower and some electronic systems were updated. However, the land version of ZAK Meroka due to limitations in size and weight lost the radar station. It was assumed that the operator will receive the necessary information from the outside, from other radars. In addition to the towed variant, a self-propelled one was developed, but it was not even embodied in the metal.

The towed artillery systems, in turn, existed and, under the conditions of the landfill, successfully hit training targets. But by the end of the tests their main disadvantage was manifested. On ships, the Meroka complex played the role of the last argument - it had to destroy only those anti-ship ammunition that managed to break through the zone of destruction of anti-aircraft missiles. The air defense of the ground forces turned out to be much more difficult, because airplanes, unlike rockets, try not to enter the danger zone and can attack from a long distance. As a result, FABA designers and the military had to admit that the land version of the Meroki has no practical advantages over the existing receiver anti-aircraft systems.

As for the original ship version, it is still in service with the Spanish Navy and shows its capabilities on regular exercises. Even almost four decades after the development of ZAK, Meroka looks promising and interesting. Several years ago, fragmentary information appeared, according to which Spain continued to explore in this area and is trying to create a similar anti-aircraft system with larger-caliber guns. But so far there is no information about this project, which is why Meroka remains the only embodiment of the original idea. 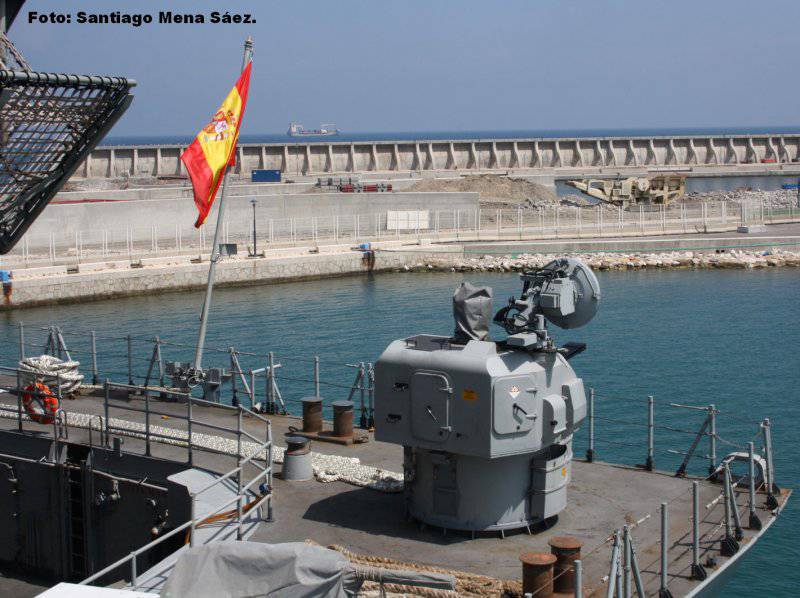