25 2013 June
15
Over the past decades, the main armored forces of Romania are medium Tanks T-55 models and its modifications, built in the Soviet Union or assembled under license at Romanian plants. Over the past time, the design of the original T-55 managed to undergo several modernizations, as a result of each of which a new modification of the combat vehicle appeared. The latest Romanian development of the T-55 family tank is the TR-85M1 Bizonul armored vehicle ("Bison"). The development of this modernization project for the previous TR-85 tank began in 1994 in accordance with the order of the Romanian Ministry of Defense. 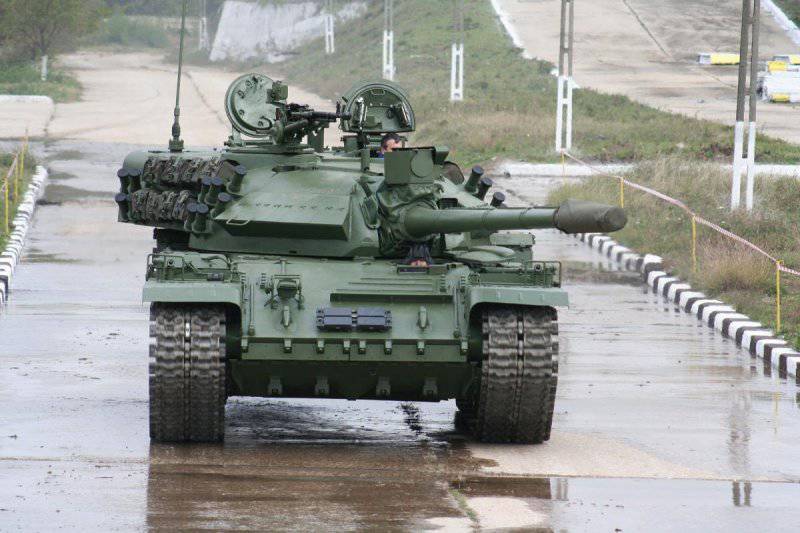 It is worth noting, on the way to the "Bison" Romanian T-55 had a noticeable change. On the basis of the original tank, TR-580 was first created, then TR-77, and only after it appeared TR-85, which became the basis for the most recent development. Because of such a "pedigree" modern tank TR-85M1 little resembles the original Soviet T-55. In this case, Bizonul retained some of the features of the T-55 tank, which greatly affect its appearance and combat capabilities. And yet, the Romanian tank builders are positioning their development as a new combat vehicle, far superior to all previous tanks based on the T-55.

The project involved several Romanian and foreign organizations. So, the main role was assigned to the local consortium ROMARM, and several European companies were invited to the project as subcontractors. The most noticeable mark on the project was left by the French company Matra, which supplied most of the electronic equipment. Also in the modernization of the TR-85 involved the company Sagem, Racal, EADS and others. Probably due to such international cooperation, a number of systems of the finished tank TR-85M1 are compatible with NATO standards.

Even before the start of work on Bizon, the Romanian versions of the T-55 received an updated armor case. In order to optimize the internal space, the hull was extended by about 500 mm, which, however, required that the undercarriage be supplemented with another support roller. It is noteworthy that the increase in the supporting surface could not positively affect the specific pressure on the soil. The finished TR-85M1 was heavyweight to 50 tons, and the specific pressure increased to about one kilogram per square centimeter.

The growth of the tank's combat mass was due to several factors at once. First of all, it is necessary to note the updated frontal booking of the hull. Instead of the rolled sheet, which was present on the previous tanks of the family, the Romanian designers equipped Bizonul with a combined armor unit. According to some sources, the design of this unit is similar to that used on T-72 tanks. Based on these data, we can draw conclusions about the level of protection of the forehead of the armored hull. The TR-85M1 tower also became stronger. Through the use of a new design, its frontal part provides protection at the level of 350 mm homogeneous armor. In addition, elements of dynamic protection are mounted on the cheekbones of the tower. 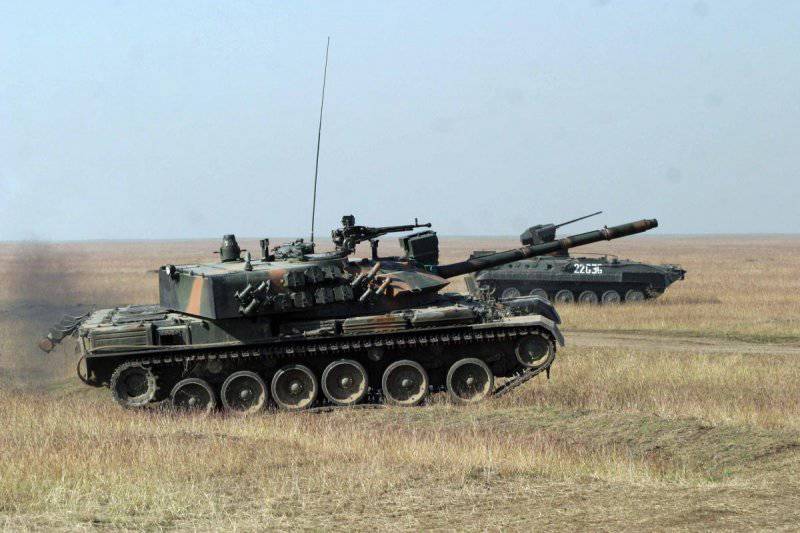 An increase in the tank's combat mass required a change in the power plant. Instead of the TR-85M engines available at that time, the new 8VS-A2T2 German diesel engine produced in Germany with 830 horsepower was obtained. The engine torque is transmitted to the drive wheels using the THM-5800 six-speed hydromechanical transmission. The use of the new engine made it possible to slightly raise the specific power of the tank - this figure exceeded the 17 hp. per ton of weight. With the help of a new power plant, Bizon is able to accelerate to the highway to 60 km / h. However, a slight increase in power density, combined with increased pressure on the ground, had a bad effect on the combat capability of the combat vehicle. In this parameter, the new Romanian tank almost does not exceed the old Soviet T-55.

The turret of the TR-85M1, although it represents the development of the corresponding T-55 unit, is significantly different from it. It has a slightly larger size and a characteristic elongated forage niche. When finalizing the fighting compartment, several goals were pursued. Firstly, the Romanian tank builders brought the ammunition assembly outside the manned volume and placed it in a niche of the tower, equipped with inside security doors and externally ejection panels. Secondly, as stated in some sources, the TR-85M1 was later planned to be equipped with an instrument of millimeters 120 or 125. However, in the end, all built tanks Bizonul received a smaller caliber cannon, a similar gun T-55. 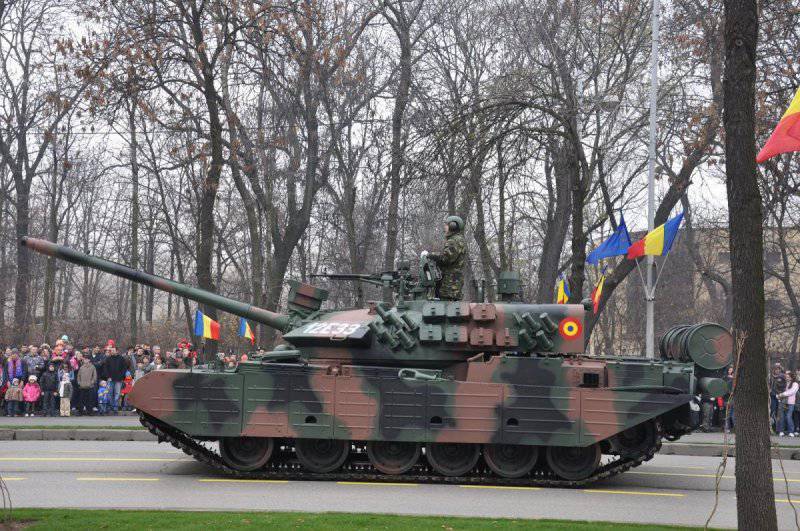 The 100-mm gun A308 Romanian production is a further development of the Soviet gun D-10, one of the modifications of which was installed on the T-55. The recoil device also went to the "Bison" without significant changes. In the aft niche of the tower it was possible to place the packing on the 41 unitary projectile. The loading is done manually, which is why the maximum rate of fire does not exceed 5-6 rounds per minute. The absence of any automated devices for the supply of ammunition appropriately affected the composition of the crew: there are still four people. The additional armament of the TR-85M1 tank consists of one PKT machine gun coupled with a cannon with ammunition in 4500 ammunition and an antiaircraft gun-shank with a reserve in 750 ammunition over the commander's hatch. In addition, a total of 20 smoke grenade launchers are located in the front and rear sides of the turret.

Smoke grenade launchers can be used both in manual mode and in automatic mode. In the second case, their control is transferred to the French-made SAILR and DLC systems. The first monitors the situation around the tank and is designed to detect flying anti-tank ammunition or radiation guidance systems. The second controls the shooting of smoke grenades and false heat targets. According to some reports, the Bizonul tank is equipped with two dozen grenade launchers in order to increase the likelihood of survival on the battlefield, even with existing outdated weapons.

Another way to increase the likelihood of a successful outcome of the battle is a new fire control system. The French-made Ciclop-M FCS is associated with a laser range finder, a sensor set and a ballistic computer. The tank gunner has a telescopic sight and a Sagem ALIS night vision device. In addition, the thermal imaging device is built into the commander's observation devices. Above the gun barrel there is an optical-electronic block of the Sagem MATIS night vision device common for the commander and gunner. Sights and guns are coupled with a two-plane stabilizer manufactured by the EADS concern.

The ammunition of the tank TR-85M1 includes armor-piercing fin-stabilized sub-caliber projectiles BM-421 Sg, cumulative BK-412R and BK-5M, high-explosive OF-412, armor-piercing with tracer BR-412B and BR-412D, as well as training PBR-412. The aiming devices and the characteristics of the weapon make it possible to hit targets with the help of cumulative ammunition at a distance of up to three kilometers. The maximum range of high-explosive fragmentation projectile is about six kilometers. According to ROMARM official data, the BM-421 Sg armor-piercing projectile can pierce up to 425 millimeters of homogeneous armor from a distance of one kilometer and at an encounter angle of 90 °. By modern standards, such indicators do not look particularly successful, but they may be sufficient to combat obsolete armored vehicles. 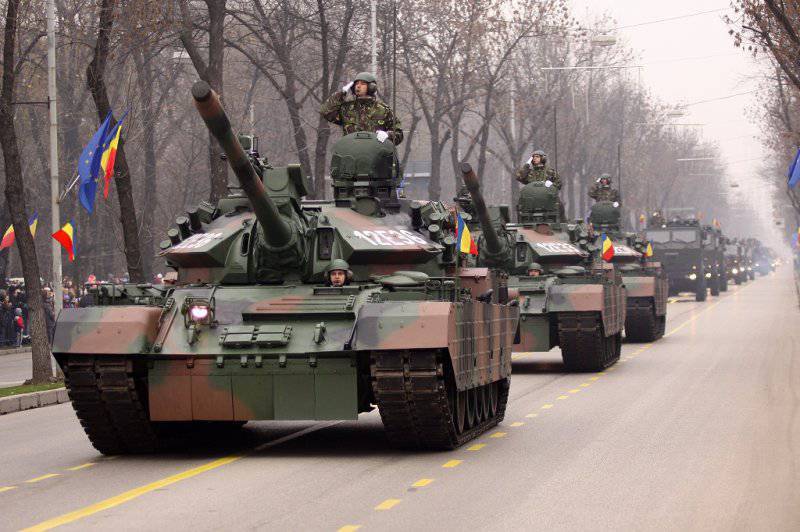 From the very beginning of the design work it was assumed that the TR-85M1 Bizonul tanks would not be built from scratch. They were proposed to convert from the available TR-77 and TR-85. Due to this approach, it was possible to significantly reduce the cost of updating the fleet of armored vehicles. Upgrading one tank of the old model to the TR-85M1 state costs no more than one and a half million US dollars, which is much less than the price of a new tank with similar characteristics. Repair and modernization of the available tanks TR-85 began in the very late nineties and lasted for several years. In total, about 50-55 machines were converted. According to some data, it was planned to upgrade the entire existing fleet of TR-1 tanks to the state of “M85”, but due to the difficult financial situation the project was actually frozen.

Of some interest is the issue of classification of the new Romanian tank. The combat vehicle has a serious defense and combat mass, which does not allow it to be ranked among medium tanks. At the same time, the armament and mobility of the Bison do not meet the criteria for heavy and main tanks. This classification problem was solved quite simply. Since the TR-85M1 is a deep modernization of the medium tank T-55, he, as the military and tank builders thought, should also be considered an average.

Currently, the Romanian army has X-NUMX TR-250 and 85-50 TR-55M85 tanks. It is worth noting that updating even a small fraction of the existing fleet of equipment significantly affected the capabilities of the armored forces, although after that they cannot be called modern. There is information about the development of a new modification of the TR-1 with the additional index “M85”. Allegedly, this tank will get a more powerful engine, a new 3 caliber or 120 millimeter gun, an updated reservation and more advanced electronics. In addition, it is likely that the prospective tank will be equipped with dynamic and active protection systems. In recent years, however, only a lot of talk has been known about the modernization of the TR-125M85. Apparently, to date, this project has not reached even the stage of building a prototype. For this reason, over the next few years, the Bizon will remain the newest and most advanced tank in Romania.