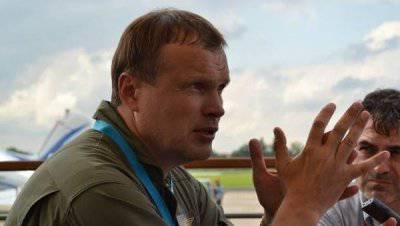 The high maneuverability demonstrated by the Su-35C fighter at the International Aerospace Exhibition in Paris is rooted in the Russian concept, in which melee combat and maneuverability at low speeds remain important factors, said the main test pilot of the Design Bureau. Sukhoi Sergey Bogdan, reports today Aviation Week.


The aircraft, equipped with a three-axis thrust vector and a fully integrated flight control system and powerplant, can perform maneuvers with which not one fighter in service, including such as a bell, a cobra, and, of course, a turn on the 360 hail almost in place, as well as flying at very low speeds at an angle of attack of almost 90 hail.

"Most fighters that are equipped with thrust vector control, such as the Su-30MKI and UCM, are capable of performing these maneuvers, but the Su-35C is different in that it has a greater engine thrust when it performs a bell, and therefore can calmly" stand "Upright, and can perform a steady flight at a speed of just 120-140 km / h," says Bogdan.

The emphasis on “super-maneuverability” contradicts many Western tactics of air combat, in which the main attention is paid to maintaining high speed in order to avoid the loss of the aircraft’s energy. Bogdan, however, says that the factor of super-maneuverability in air combat can be significant.

“Classic air combat begins at high speed, but if you miss the moment when you could launch a rocket first, the battle moves to close distances, and you need high maneuverability to avoid defeat by the enemy fighter, and this phase of the battle may be longer. After completing the maneuver, the aircraft will fly at a lower speed, but both opposing fighters must take up a position for firing as soon as possible. Super-maneuverability allows you to do this for three seconds and hit the enemy again, ”said the chief pilot.

However, Bogdan stressed that “you must be careful when using this tactic. This is akin to the fact that a sniper cannot shoot many times from the same place where he is located so as not to reveal his position. ”

Bogdan recalled the essence of the Cobra maneuver on the Su-27: a quick speed reduction, which can disrupt the capture and tracking of the enemy’s Doppler radar. This maneuver is even more developed on the Su-35, when, after its execution, the fighter can fly in any direction (as is well known, the Su-27 engines do not have deflectable nozzles to control the thrust vector - note "VP").