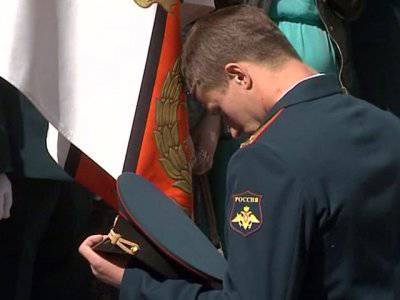 In Russia, diplomas are awarded to graduates of military schools. Shoulder straps of the lieutenant get rocket, paratroopers, military doctors, and among the young officers - a lot of girls.


One of the first this year, lieutenant shoulder straps were put on by graduates of the Peter the Great Military Academy of the Strategic Missile Forces. The armed forces received 750 scientific officers in 24 specialties, ranging from mathematics and software to ballistics and testing of aircraft. And together with the young people 28 girls have graduated from the Academy. For five years, four cadet families have appeared in the university - this is an absolute record, which once again proves that there is a place in the army and for romance.

"For me, the romance began even on the course of a young fighter, when instead of some huge bouquets of a hundred roses brought wild flowers," recalls graduate Zlata Selyunina.

“Yes, I drew different pictures on the tablet, hearts; and now I have such a beautiful one in front of me - my wife is already,” says Pavel Volobuev.
But if the rocket women could still be found in the army, then the paratrooper girls appeared in them for the first time. The Ryazan Higher Airborne Command School this year produces the 13 representatives of the weaker sex.

“A girl in the Airborne Forces is the beginning of the future. This is a man who will probably stimulate everyone. Still, a woman creates a certain position in the army — officers are becoming much more intelligent, more decent,” said Angela Schastchenko graduate of the school.

More than 700 doctors graduated from the Kirov Military Medical Academy in St. Petersburg. The successors of the Sechenov, Pirogov, Botkin case will go to serve in all branches and branches of the armed forces, after which some of them will remain in the army, and some will return to the Academy to enter clinical residency and in parallel with the medical activity to do science. By the way, the leadership of the military department once again confirmed its interest in this university.

"In fact, this is one of the most important universities in the system of the armed forces and in the system of medical universities in the country. The university that requires attention, which requires funds. By decision of the Minister of Defense, all this is indicated in the form of a conceptual development program for the Academy, where funds are provided" - said Russian Deputy Minister of Defense Ruslan Tsalikov.

Graduates of the Baltic Naval Institute named after Admiral Ushakov gladly tear off their vest and fasten the dirk now to the officer’s uniform. Anchors on epaulets are replaced by two lieutenant stars - it is from here that the future commanders of ships and submarines of all fleets leave. By the way, not only Russia - in the ranks of graduates and foreign military personnel: 15 people from Angola and Yemen.

And in the Air Force Academy named after Zhukovsky in Voronezh, and at all prepare specialists from 30 countries. In the classrooms of this university you can find students from almost all continents. The release of 2013 is exemplary: out of 1200, the 160 cadets graduated from the academy with a red diploma, the rest had an average score of at least four.

“For the first time, all graduating officers are distributed to officer positions. You know what“ tension ”was, and this year we begin life in a new way,” says Russian Air Force Commander Viktor Bondarev.

This year, recruitment to many military universities will increase significantly, and to order lieutenant cadres from institutes, colleges and academies there will be specialized headquarters and headquarters. That is, how many, for example, in the near future, troops may need airborne officers - now decides the command of the Airborne Forces. They will be responsible for ensuring that universities are provided with everything they need - from desks in classrooms to teaching staff - in order to fulfill this order qualitatively and in full.

Ctrl Enter
Noticed oshЫbku Highlight text and press. Ctrl + Enter
We are
Results of the week. “We will define your disgraceful ailment as a feat: we will send to the paratroopers. There you also will start shit "Serdyukov said, Serdyukov made ... Or a trip from Monino to Voronezh
Military Reviewin Yandex News
Military Reviewin Google News
10 comments
Information
Dear reader, to leave comments on the publication, you must to register.