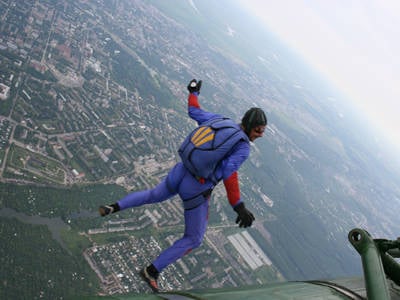 With the 17-23 June based on the 106 Airborne Division passes the Armed Forces Championship in parachuting.


The airborne troops represent the 40 best paratroopers who serve in various units and formations of the Airborne Forces, 12 of them are real world and European champions.

The championship of the Armed Forces of the Russian Federation in parachuting is held annually on the basis of one of the airborne (air assault) formations of the Airborne Forces. This year's championship will be held at the Klokovo landing site, based on the Tula airborne unit.

The competition takes part 80 people. Parachutist teams represent their military districts, types and branches of the Armed Forces, departments and organizations that cultivate parachuting in particular.
The Airborne Troops make parachute jumps with the Malva-24 parachute system, which has already proven itself when performing exercises on landing accuracy. Additional controls on this system allow you to maneuver in height and withstand strong wind.

The competition is judged by 18 of highly qualified judges with the help of special automatic counting and television equipment.

The main result of the competition will be the acquisition of the national team of the Armed Forces of the Russian Federation to participate in the European and World Championships under the auspices of CISM (International Council of Military Sports) and FAI (International aviation federation).

Ctrl Enter
Noticed oshЫbku Highlight text and press. Ctrl + Enter
We are
Innovation Day of the Southern Military District: Pictures from the ExhibitionRussia demonstrated the most promising weapons at INDO Defense-2014
Military Reviewin Yandex News
Military Reviewin Google News
2 comments
Information
Dear reader, to leave comments on the publication, you must to register.