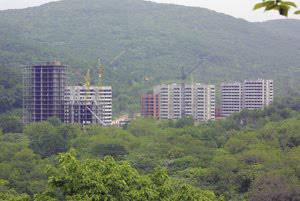 The military are the people who have chosen to protect the inhabitants of their state and ensure their security through their life way. That is why the state cares so much about the military and their families. Recently, at an open Far Eastern conference with Prime Minister Vladimir V. Putin raised the issue of housing construction for the military in the Far East, particularly in Vladivostok.

Modern new buildings, a cozy neighborhood for both retired and active military personnel, called “Snow Pad”, is a model of the state’s concern for its defenders.

Within a couple of months, more than a thousand happy owners of turnkey flats will drive into beautiful new buildings. By the end of 2011, “Snow Pad” will be home to 6000 families, and the total number of planned apartments will be more than 20 thousand.
High-rise buildings in the microdistrict are not like typical new buildings. The floors of buildings range from 10 to 27 floors, solar panels on the roofs indicate that the building looks to the future and does not ignore environmental warnings. In total, 2012 will be built at home before 44.

But, new buildings - this is only a priority construction. Living space is the beginning. Big money (3,6 billion rubles) was allocated for the construction of the infrastructure of the microdistrict. It is planned to build several schools, kindergartens, clinics, a sports complex, a stadium, and, of course, shopping centers. Of course, the “Snow Pad”, which is not located in the center of the city, is not the most convenient place in terms of proximity to the center of Vladivostok and the opportunities it gives: theaters, museums, restaurants, cinemas, many shops, etc., but in the near future with the neighborhood will build a highway through which residents of new buildings can easily get to any object in the center.

It is very difficult to be a military man, a man who condemns himself and his family to wander from city to city, from country to country - wherever his duty calls. “Snow Pad” is not a gift to the military, although they will certainly regard it as a gift, it’s just the state that is giving back the debt to its defenders.