Danil Koretsky: Do the authorities understand the needs of the people?

24 2013 June
36
“Some deputies today have a main problem - how to hide real estate abroad. And the majority of the population has a problem - there is no real estate even in Russia, ”says writer Danil Koretsky. 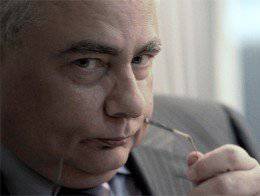 AiF: - Danil Arkadyevich, not so long ago, the Lipetsk deputy was rolled up into a barrel of cement, a Moscow official was killed in Orel, and the deputy head of a construction company was beaten to death in St. Petersburg. Are we coming back to dashing 90?

D.K .: - Here it’s not so much rampant criminals, but rather as a power. The deputy, rolled into a barrel, owed 80 million dollars. For this, he was ordered by a former deputy minister of housing and communal services of the Moscow region. This is nonsense! There are criminals in the government! It turns out that in parallel with the official leaders, there is a hidden life - even more turbulent than the inveterate criminals. It remains only to dilute his hands and grab his head. Today, those in power steal and take bribes not by the thousands, but by the billions. But we are reassured: “Yes, they are stealing, yes, corruption, but we are fighting.” And even the voices are heard that, they say, we are fighting too hard. Is it possible to fight crime too much?

And then: and with whom so much fought? Who is convicted, who confiscated property? Virtually no such! In Soviet times, the case of embezzlement in Moscow trade thundered. The director of the Yeliseyevsky deli was shot, the head of Moscow bargaining received 15 years, dozens more were convicted. In the case of the Ocean trade network, the Minister of Fisheries was retired, the deputy was sentenced to death, many leaders were dismissed and expelled from the party.

Now Tina Kandelaki announced in her program: “There are no more untouchables”. But what did she mean? If there are no more untouchable girls, then we can partly agree with her. To say that there are no untouchables among the officials ... No one has touched them yet! Here Vasilyeva (the main person involved in the Oboronservis case, in which they are investigating the plundering of property worth billions of rubles. - Ed.), Still lives quietly in an 13-room apartment under house arrest. And her subordinates are in the remand prison, where 7 meters are laid per person. Why? Where is equality? Everyone sees that the case goes down on the brakes. This is just a mockery of common sense.

"AIF": - People have a lot of questions, not only the sluggish fight against corruption, but also tragedies like the one that happened recently in Belgorod. How did a person who served several times manage to enter a hunting store in the city center and then kill innocent people? Nobody was concerned about him, nobody watched what he was doing?

D.K .: - According to our research, some people commit crimes under 5-6 and receive either a conditional sentence or are released early, under an amnesty. And then they go back to the crime path. At the same time, they are committing new atrocities in the period in which they should have served their sentences for the previous crime. We can say that our law enforcement system is idling. She swallows the criminal and immediately erupts him, although considerable funds are spent on the process of his capture and punishment ...

"AIF": - Is it even possible to say that we have a fair justice? From the last examples: the girl was put on 3, for self-defense, and the athlete, from the blow of which the man died, was quickly released.

D.K .: - I do not sympathize with this athlete in the least, but the fact is that our legislation and court practice really regard his actions as deprivation of life through negligence. Even the word "murder" was removed from the article. The punishment for this crime is up to 2 years imprisonment. As much as they give, for example, for infection with a venereal disease. Are these crimes comparable or not? But even for premeditated murder, the average sentence is 7,5 of the year. The ladder of punishments has been broken, the systematic nature of criminal legislation has been violated The result is obvious!

"AIF": - Police, despite the advertised reform, many are still afraid and not respected. Recertification in the Ministry of Internal Affairs did not give effect?

D.K .: - At the beginning of the reform, I cited an example: let's say I have apples, cherries and pears in my garden. I re-certified them in kiwi, bananas and peaches. And the neighbors announced that they come in the fall to eat kiwi, bananas and peaches. What will they think of me? And what will they say when they come and see all the same apples on the table? It is clear that neither the renaming of the police, nor the reduction of the staff by 20%, nor the increase in salaries will change the attitude of the population towards law enforcement agencies.

On the other hand, now the police is the only structure where the demand from the employees is much stricter than it was before, where its head is responsible for the subordinate. There is no such thing in any other power structure. For example, the vice-governor was arrested, and no one asks anything from the governor, although negligence is at least in his actions.

"AIF": - Our people even under the most stringent laws manage to circumvent them. Just recently, many deputies divorced to hide their property from inspectors.

D. К .: - It has nothing to do with the laws. This is a characteristic of personal dignity, respect for the rules of decency, respect for the people. That is, these deputies understand that people will say: "Divorced so as not to show the declaration of the wives on whom they have recorded everything that can be written down." But they consider it permissible. But there was a time when they wouldn’t have been given hands for such things, expelled in disgrace. For the sake of money, people manipulate both wives and children, use all sorts of loopholes to sell and at the same time lie to the eyes of the whole country. That is, in any way to observe innocence, and to acquire capital.

Today, high-ranking officials, deputies have many problems: is it possible to have bank accounts and real estate abroad, is it possible to educate children in Western universities, is it possible to have passports of other states? And the majority of the population has problems - there is nowhere to live and there is nothing to put at the expense of the ruble. Those who have elite real estate and huge bills abroad, maybe a thousand families. But for some reason they all found themselves in the highest echelons of power. Why do people represent the rich? Do they understand the needs of the people? Where are the ordinary doctors? Where are the teachers? Where are the engineers, writers, poets, the conscience of the nation?

"AIF": - Psychologists say that people better not to watch news about bureaucrats, thieves, shooting in the street, as for some it causes a nervous breakdown, and for others it leads to follow a bad example.

D.K .: - If people willingly follow what they see on TV, then why don't they follow positive examples? It would be very good: he showed a series about leading production workers - and the whole country began to over-fulfill the plans! Alas, people do not learn from the screen, but from the surrounding life. About foremost do not show anything, productive labor is superseded by buying and selling. Girls dream of a career model with all the consequences, young men - about the positions of officials, also with the resulting ...

True, they have now introduced the title “Hero of Labor”. Maybe everyone will rush to the foremost? I would like to believe ...