26 2013 June
35
We have repeatedly met Japanese weapons genius, and almost all weapons had interesting technical solutions that somehow affected the application, reliability, efficiency. In this article, we will not break the tradition and get acquainted with another seemingly ordinary model, but having a number of non-standard solutions that were very rarely used in other weapons. We will talk about the Type 64 assault rifle. True, assigning this unit to the class of assault rifles is not entirely true, since it does not use an intermediate cartridge, but the classification of not the most ordinary samples always has its own nuances and you can argue about whether a weapon belongs to a particular class for an infinitely long time without coming to a consensus.

In the middle of the twentieth century in Japan, the question of introducing a new class of weapons into the troops was very acute. The fact is that at this time almost all countries acquired weapons with the possibility of automatic fire under an intermediate cartridge, and Japan still used the M1. Naturally, such a lag could not help but worry the Ministry of Defense, and the imperial habits did not allow them to turn to other countries for support in this matter, and the financial side of such support was clearly not pleased. The first to solve the problem was the well-known Nambu, but his influence apparently weakened, and the sample he proposed failed even in factory tests. It is even possible that Nambu would create another masterpiece, if he had time to refine his sample, but he had better and faster competitors, so another example of non-standard thinking of a gunsmith remained only as an experienced raw sample. In addition, there was another nuance, which was the unwillingness to establish a new production of ammunition, and since Japan did not have an intermediate cartridge at that time mass produced, then the designers had a really very difficult task. 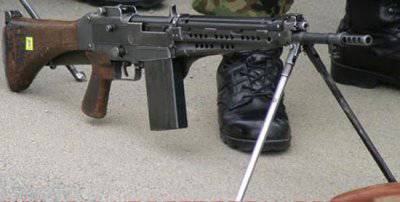 The gunsmiths of the Howa Machinery Company under the leadership of General Iwaschito coped with this task. The solution to the absence of an intermediate cartridge was the modernization of the 7,62x51 munition. During this modernization, a lighter bullet was developed for the cartridge, and the powder charge was also reduced. All this was necessary in order to reduce too much recoil of the ammunition, which did not allow for automatic and comfortable automatic fire without the use of bipods. Naturally, this decision completely changed the characteristics of the ammunition and not for the better, while the dimensions of the cartridge remained the same. If we consider this ammunition in comparison with common intermediate ones, then it showed the best characteristics both in armor-piercing and in the direct shot distance, however, firing more than 700 meters would be foolish. 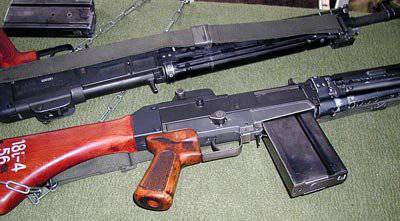 Thus, the ammunition for the new machine gun (or is it still a light machine gun?) Was ready, its production was adjusted and did not cause additional costs, the business was left to do - to create a weapon. The appearance of the device, which turned out as a result of the work of designers, turned out to be quite ordinary, without any unusual elements. The butt of the machine was moved to the line of the barrel, in the butt itself there was a return spring, which made it difficult to create a version of the weapon with a folding butt. In the process of creating the final sample, the designers solved many problems, mainly related to the ammunition, which were used, but one problem remained unsolved for a very long time. This problem was the overheating of the chamber, which led to the involuntary ignition of gunpowder in the ammunition when fed into the chamber. The solution to this problem turned out to be very unusual, and I personally do not fully understand. Many sources indicate that the weapon automatically changes its mode of operation when the chamber is overheated. So, during automatic fire at the normal chamber temperature, the shot comes from the closed shutter, when the chamber is overheated, the shot is fired from the open shutter. In general, I don’t have real doubts that this is real, but the reliability of such automatic switching causes a lot of questions, since such an outrage can be realized only on the basis of an increase in the volume of a heated body. In general, most likely the switch was made manually, but I will not insist. 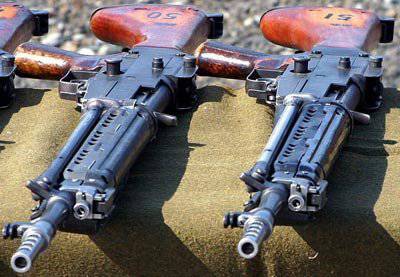 By the way, about switching. Switching fire modes, as well as the inclusion of the fuse by using a fairly large element, far protruding beyond the weapon. Sights are represented by the entire diopter and front sight. The shutter handle is made in one piece with him and is located on top. I forgot the most important thing to mention: the automatics of the weapon is built according to a scheme with removal of powder gases from the barrel bore;

Despite the fact that when designing this sample, considerable attention was paid to ensuring that the weapon and ammunition were relatively cheap, the Type 64 machine gun is a very expensive weapon, since so many details were done by milling, and the machine design itself was such that it was fixed It is impossible, however, no one tried. The weight of the machine is 4,4 kilograms, the total length of almost a meter with a length of 450 barrel millimeters. The device is fed from detachable box stores with a capacity of 20 cartridges.

Ctrl Enter
Noticed oshЫbku Highlight text and press. Ctrl + Enter
We are
Guns 12 caliber with the possibility of automatic fireExperimental and prototype weapons of Izhevsk Machine-Building Plant (assault rifles and rifles)
35 comments
Information
Dear reader, to leave comments on the publication, you must to register.