In Russia, the melee of the new generation 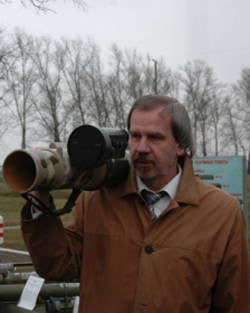 In Russia, the means of close combat (SCB) of a new generation are being created. The work on the SBB is carried out, in particular, in the Bauman Moscow State Technical University, which, by competition, was chosen by the Russian Ministry of Defense as the lead developer of the new weapons.


According to the ARMS-TASS correspondent, the director of the Scientific and Production Center "Special Technique" of the Moscow State Technical University. N. Bauman (NPT "ST"), a famous scientist and designer of ammunition for the ground forces, air force and navy Vladimir Korenkov (in the picture), provided that the financing and interest of the army in this direction, experimental design work ( OCD) to create a melee of the new generation will be completed in 2014 year, and the implementation of the first state defense order (GOZ) to replenish arsenals of new ammunition will begin with 2015 year. Starting from 2014, new developments are planned, which will continue the development of the RCD currently being implemented.

"I believe that we will offer the army something new every year in order to equip it with the most modern weapons by the 2020 year, as indicated in all directive documents," he said.

In Russia, there are no plans to lag behind in working out new world challenges in the direction of close combat, the scientist believes. “Here, at MSTU, within the framework of industry science, we are addressing these issues. Acting as the lead developer for melee weapons, we are trying to draw the best forces in the country to those who are interested in and able to decide together with us “We are participating in the state defense order, we offer our solutions in tenders, we work in the interests of the Ministry of Defense. I am very optimistic about the capabilities of the specialists with whom I work and whose range is constantly ryaetsya. This means we will effectively address the challenges that exist in a call, and those that have already been delivered. "

As V.Korenkov noted, the operative tracking and understanding of new trends in the development of melee weapons made it possible to launch initiative development in the beginning in 2000-s and create the necessary groundwork. Now that the forecasts available at that time have been fully confirmed, the foundation has been successfully used to implement the state armaments program. This made it possible, in particular, to ensure that Russia is at the forefront of the development of the BSS.

“Recently, technologies have appeared that provide, despite any opposition from the enemy, a reliable connection between the shooter and ammunition at distances of the“ urban zone ”(from 0 to 1,5 km) and, thereby, allow us to solve reconnaissance and destruction tasks. there are developments that will allow in the near future to obtain a qualitative change in the nature of the ammunition and in the nature of the conduct of hostilities in cramped conditions, "said Vladimir Korenkov.

“Ammunition - a strike-reconnaissance complex is the most effective ideology,” the scientist believes. “Everything else is intelligence first, for example, a drone, and then shooting is a loss of efficiency.” At the same time, ensuring the removal of other functions to the fighter, gives, in addition to cheaper ammunition, other advantages, for example, expands the capabilities of the SSB up to its network use.

“This kind of ammunition, which simultaneously performs the functions of reconnaissance and destruction, automatically replenishes the overall collective information base across the battlefield. Therefore, this trend in the development of melee weapons with the possibility of operational reconnaissance with an automatic weapon complements the tactical level control system,” Vladimir Korenkov explained.