The Nobel Committee noted that B. Obama fired more cruise missiles than all the other Nobel Peace Prize laureates put together.


The orange sun disc rolled into the waves of the Libyan Sea, and the night darkness thickened over the silent water. At midnight GMT, USS Florida Central received an order from Washington - “Start!” Waiting in ambush, the submarine rocket carrier moved an invisible shadow towards the Libyan coast. Operation Dawn Odyssey has begun.

... The rocket control panel flashed with anxious ruby ​​light and shone weapons. The commander and senior officer of the submarine at the same time turned the start keys - the missiles stood on a combat platoon. The guidance systems woke up, data on the position of the starting position flowed into the Tomahawks' on-board computers (target coordinates and digital relief maps along the flight route were pre-entered into the memory of the missiles while stationed at the Navy Diego Garcia).

- The key to start! - One after another, winged devils jump out from under the water and rush up. Hellish flashes of torches rush over the surface of the sleeping sea, and the boat continues to shoot and shoot. It seems that the ammo of USS Florida will not end ...

The start-up booster throws "Tomahawk" to 1000 feet. On the descending branch of the ballistic trajectory, the air intake of the main engine extends, the rocket spreads its short wings and rests on the combat course. 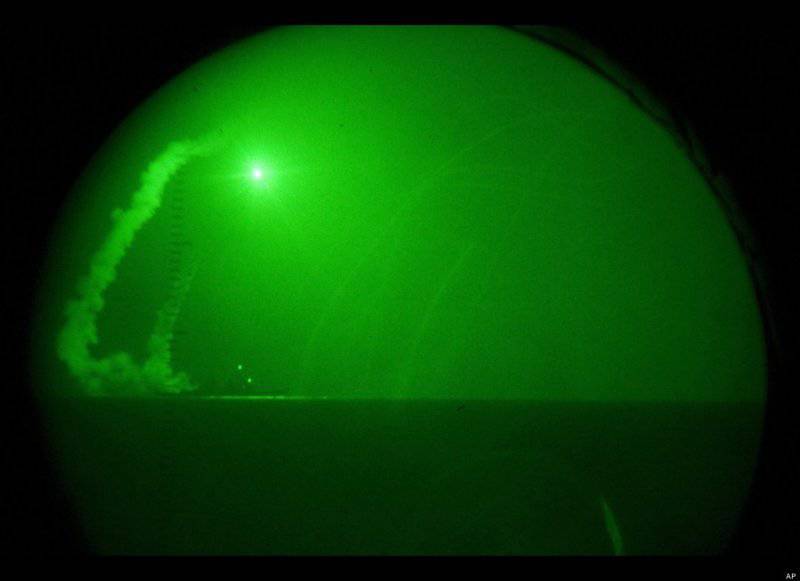 ... Under the wing, the coastline was curved - the Battle Ax arrived in the area of ​​primary correction. TERCOM and DSMAC guidance systems are activated, the radar and optical sensors carefully “feel” the terrain. Having compared the data with satellite images, the Tomahawk swung the rudder short planes and rushed in the direction of the chosen target.

A swarm of cruise missiles flies over the sands of the Sahara. The Libyan air defense system occasionally sees flare on the radar screens, but is unable to take any measures to repel a rocket attack. The lighting is cut down, the chairs are overturned with a crash - the Libyans are noisy leaving the control posts of the C-200 SAM system. The complex is useless when firing at low-flying missiles, but it will certainly become the target of an American strike - people are running away from military equipment, and staying close to it has become deadly.

The Libyans do not know that their panic is closely monitored by three pairs of eyes - “so pi” from the French Foreign Legion (TACP). They will induce "Tomahawks" to the position of anti-aircraft missile battery. Special forces groups were secretly abandoned by helicopters into the territory of Libya a few hours before the first missile-bombing attack. 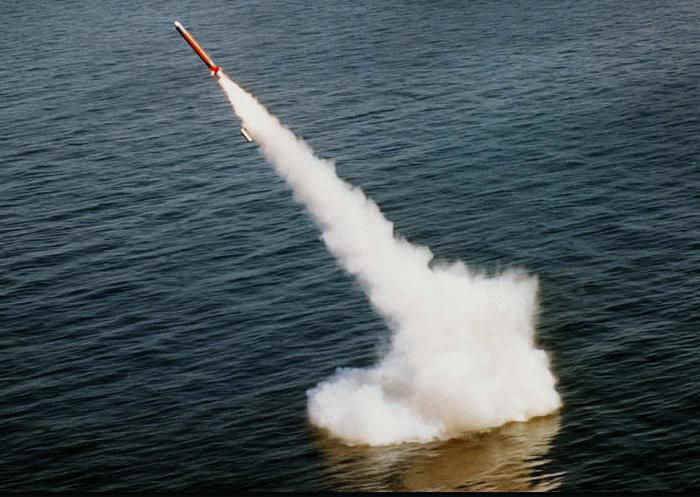 ... The zened barreled anti-aircraft artillery, the gunners are trying to catch in the crosshairs of sights a "comet" racing in the sky. “He goes too low and fast, the angular movement is too large, I don’t have time to screw the trunks” - probably the Libyan soldier wanted to say exactly that, but instead of a long phrase, he had a desperate cry “Alla Akbar!”

19 March 2011, the US Air Force and the US Navy suffered a massive rocket-bombing attack on Libyan strategic facilities. Airplanes and sea-based cruise missiles burned radars and air defense missile systems, destroyed equipment and warehouses of fuel and lubricants at airfields, hit military bases and command centers, disorganizing control of the Libyan army. Colonel Muammar Gaddafi overnight lost control of the situation in his country.

Having completed its sorrowful mission, USS Florida silently dissolved in the vast Mediterranean Sea. The 93 smoky traces of Tomahawks released slowly in the air ...

The boat with the monstrous destructive power of USS Florida (SSGN-728) is one of the four submarine arsenals of the US Navy, the result of a successful conversion of Ohio-type SSBNs into cruise missile carriers.

In 1994, a new doctrine of the development of US strategic nuclear forces (1994 Nuclear Posture Review) was adopted - largely the result of international treaties START-1 and START-2. According to the new doctrine, the number of Ohio-class nuclear submarines with ballistic missiles (SSBNs) was reduced from 18 to 14 units.
However, the Yankees were in no hurry to dispose of their "extra" boats. By the time the decision was made to reduce the SSBNs, the most “elderly” of the missile carriers destined to be written off had barely celebrated 12 years, and only Georgia had turned 10 - a ridiculous age for ships of this class.

Having thoroughly analyzed the situation, the Americans came up with how to save new ships without violating the terms of the Strategic Offensive Reductions Treaties. Instead, the ballistic missiles will equip the boat with other weapons, turning them into ships for special operations. The best tool for fire support in local conflicts and not only ...

By 2002, a detailed conversion plan was prepared - the Trident-1 missiles were unloaded from the boats and the Mk.98 firing control system was dismantled. Instead of 33-ton ballistic missiles, new 7-charging glasses were inserted into the launch shafts to accommodate the Tomahawk SLCM — the entire 22 mine with 7 cruise missiles each.

Another eight mines (№3 - №10) are usually used as compartments for storing weapons and special equipment for special operations forces - sea fur seals (SEAL). If necessary, 7-charging starting glasses for storing and launching "Tomahawks" can be inserted into them, increasing the maximum ammunition load of the boat to the 154 "Battle axes". Solid. 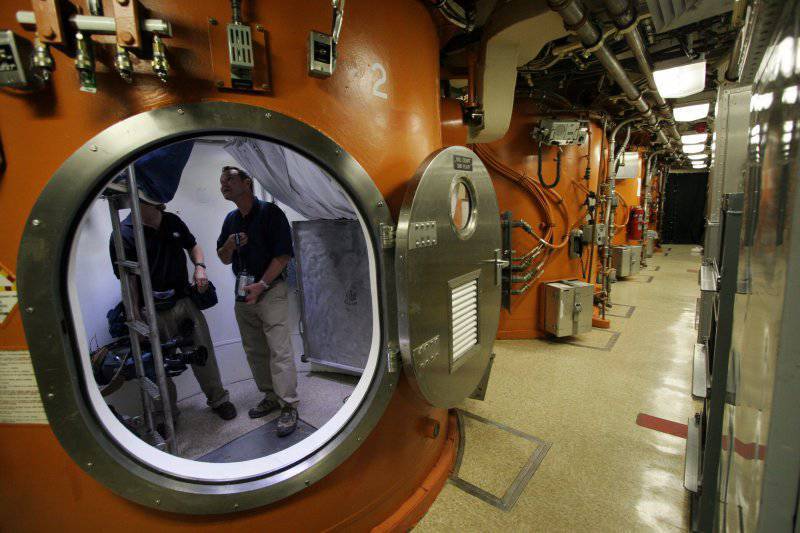 Airlock submarine "Florida"
The remaining two nasal missile silos (No. XXUMX and No. XXUMX) were converted into airlock chambers to reach the combat swimmers (saboteurs, light divers) - each is designed for simultaneous access to the outboard space of up to 1 people in the corresponding diving equipment.

Outside, in the felling area, mounted mount for containers Dry Deck Shelter, used to transport mini-submarines, experimental UAVs and other special equipment. In the interior of the ship is equipped with a cockpit to accommodate a detachment of 66 "fur seals" (it is reported that the landing can be short-term increased to hundreds of people). 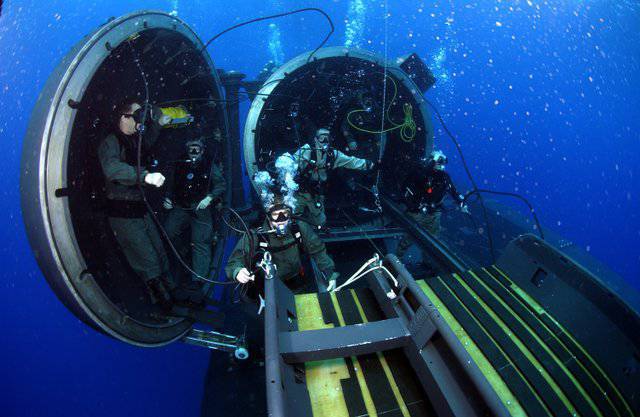 Using Dry Deck Shelter
As a result, the fleet received a unique warship for special operations - fire support (98 ... 154 "Tomahawk" - a real underwater launch site!), Secret ejection of saboteurs and special forces groups, transportation of equipment, secretive observation of the coast of the enemy (Ohio-type boats traditionally considered to be one of the most “quiet” nuclear submarines of the USA), finally, if necessary, the boat can be used as a conventional torpedo submarine.

The most vivid and expressive characteristic of the modernized "Ohio" was given by a high-ranking representative of the US Navy, who said in an interview with the Defense Weekly newspaper the following: “Within the framework of one submarine we have the opportunity to choose either a“ hammer ”(154“ Tomahawk ”) or a“ scalpel ”(60-100 is a man of naval special forces).

Ohio has a serious hydro-acoustic complex: the AN / BQQ-6 spherical antenna made by IBM occupies the whole nose section. In addition, the boats are equipped with an AN / BQS-13 active sonar, a short-range AN / BQS-15 sonar for safe navigation under the ice shell of the Arctic, as well as towed passive antennas TB-16 and TB-23 to eliminate the possibility of "stalking" enemy submarines in dead sector behind the submarine's stern (1400 sonar sensors of the TB-16 antenna are placed in the form of a thick, 9-centimeter cable 60 meters long - the antenna is towed behind the stern at a distance of 800 meters behind the submarine).

The Ohio is a fairly large ship. The surface displacement of the boat is 16 800 tons, scuba - 18 750 tons. Submarine length - 170,7 m; the greatest width of the hull is the 12,8 meter.
The boat has a mixed design - a robust cylindrical body divided into the 4 compartment, complemented by streamlined extremities, in which there are ballast tanks, a spherical antenna GAK and a propeller shaft. The upper part of the strong body is covered with a permeable lightweight superstructure, inside of which towed antennas and other auxiliary equipment are placed.

Regarding the range of operating speeds and depths of the "Ohio", the US Navy never advertise this information, limited to vague phrases:
Max. submerged speed of 20 + nodes;
working depth immersion 240 + meters.

Indirect evidence indicates that the submerged speed of the boat is no less than 25-30 knots. - Ohio is equipped with a single water-cooled S8G reactor with a thermal capacity of 220 MW, which drives two turbines with a total capacity of 60 000 hp. (The mass of the reactor compartment is 2750 tons, one recharge is enough for 20 years). For comparison: the Russian strategic launch missile submarine of the 955 project “Borey” is equipped with a OK-650В nuclear steam generating unit with a thermal power of 190 MW. Power turbines of the Russian nuclear-powered ship 50 000 hp, declared underwater speed 29 knots.
Regarding the depth of the dive, a number of sources indicate for Ohio a maximum depth of the order of 500 meters.

The conversion of Ohio into shock / multipurpose submarines continued from 2002 to 2008 for the year and was associated with a scheduled overhaul of nuclear-powered ships. In total, four units were upgraded - “Michigan”, “Florida”, “Georgia” and the head boat of the project of the same name - “Ohio”. The updated ships received a rare SSGN designation for the US Navy - submarine, guided missile, nuclear powered (literally - PLA with cruise missiles). Prior to this, such a “title” was worn by only one American submarine, the Halibat (SSGN-587), launched in the distant 1957 year. 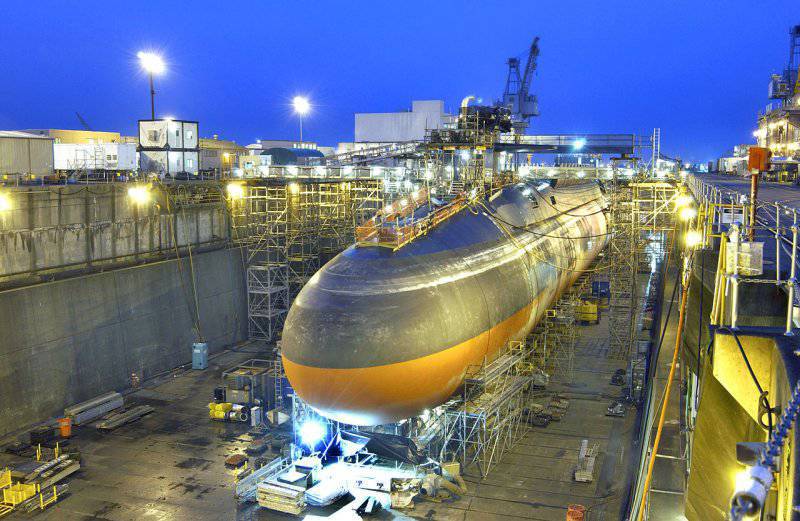 Head "Ohio" is being upgraded
With the R & D conducted, the cost of upgrading and converting each of the Ohio cost the US budget 800 million dollars (for comparison, the same amount is the construction of a new UDC of the Mistral type).
As for the continuation of the construction (conversion) of similar submarines, no plans on this subject can be heard. Which is understandable - four Ohio drums can bring down sea-based cruise missiles to the enemy in a salvo to 600 (not counting Orly Burk destroyers and dozens of other types of PLA). Where more?

In addition, the capabilities of the US Navy information centers for developing flight missions for the Tomahawks are limited - the Yankees are unlikely to be able to train more than a thousand cruise missiles in a short time.

Boats regularly serve "in the name of the spread of democracy." It is no coincidence that the first overseas “presentation” of the modernized “Ohio” was held in 2008, in the naval base of Busan (South Korea) - in one of the “hottest” parts of the world.

However, the case is not limited to one “flag demonstration”. In less than five years from the moment they were commissioned, the nuclear submarine Florida had to take part in a real combat operation. The boat distinguished itself when striking Libya in the spring of 2011 of the year: the 93 of Tomogawk released overnight — the result, frankly, impressive.

An amazing thing! The Americans finally managed to create a successful, and at the same time relatively cheap and economical ship.

It's no secret that most of the time the US Navy is buried in "technological glamor", mastering budget powerful and modern warships, however, possessing a completely transcendental cost and an excessively complex construction. The aircraft carrier "Gerald Ford" ($ 13,2 billion without R & D and wing), the stealth destroyer "Zamvolt" ($ 3 billion without R & D). The newest multi-purpose nuclear submarines of the Virginia type (to date, the cost of construction has exceeded 2,5 billion dollars) ...

And suddenly, in the midst of all these wonders, there is a project of upgrading quite elderly submarines at a ridiculous price for the US Navy - just $ 0,8 billion per unit. On the technical side, the Ohio is a strong warship, without any frills and "nanotechnology." The severe calculation of the nuts and steel of the Cold War, saturated to the limit with high-precision cruise missiles and diving equipment. 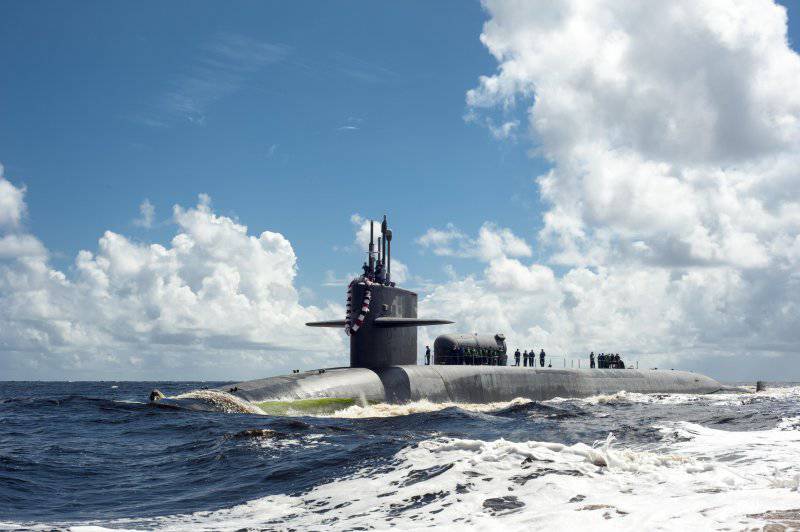 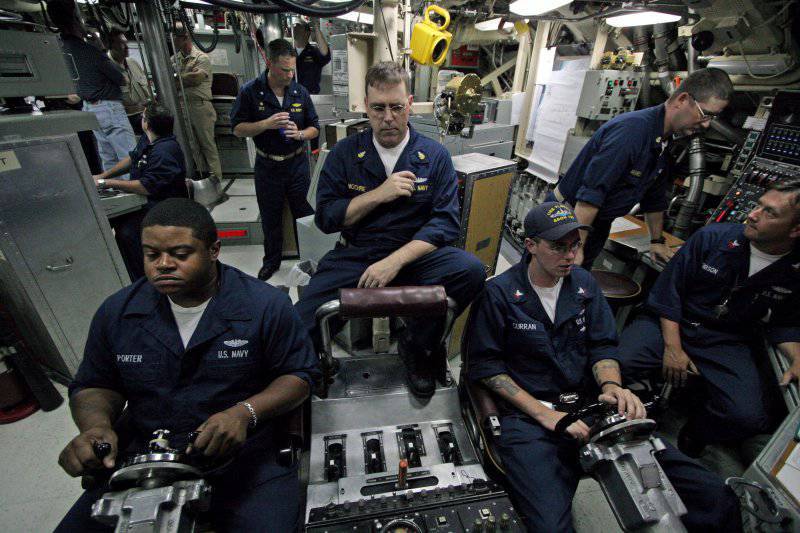 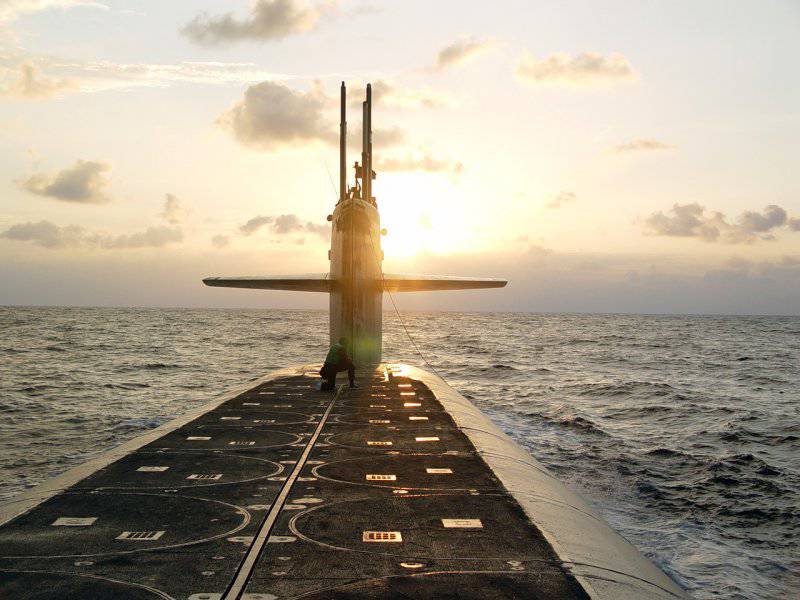