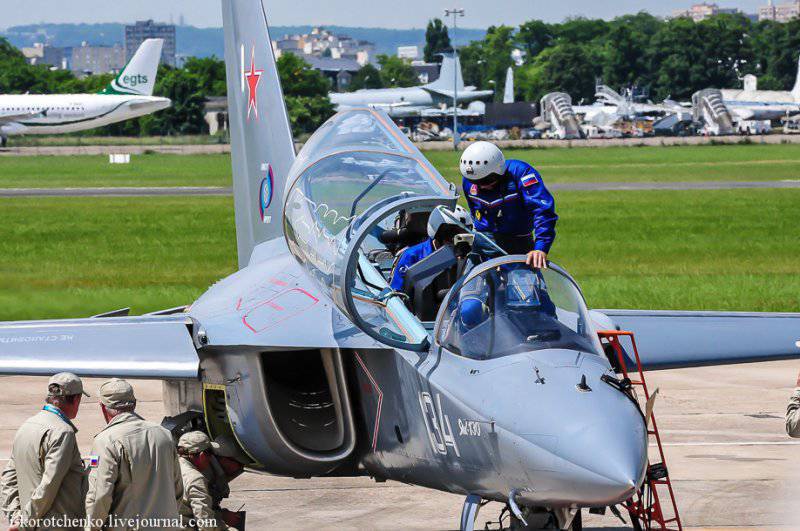 At the Le Bourget-2013 international aerospace show, the Yak-130 was recognized by international experts as the best model of combat training equipment. The newest fully integrated digital avionics complex developed and produced by the enterprises of the Radioelectronic Technologies Concern (KRET) of Rostec State Corporation allows the Yak-130 to mimic the information and control field of the cockpits, the main flight characteristics and the use of combat systems of the latest fourth and fifth fighters generations.

The twin-jet training and combat aircraft of the new generation Yak-130 is designed for training, advanced training and maintaining flight skills of pilots for fourth and fifth generation fighters. For the Yak-130, KRET enterprises have developed, manufactured and integrated advanced navigation, aerobatic and combat avionics systems into a single digital avionics complex. Thus, the Yak-130 became the first Russian aircraft, not having on board analog devices.

The integrated on-board equipment complex, created by the Development Electrotechnical Design Bureau of KRET, has an open architecture, which facilitates its modification due to the installation of new equipment and the introduction of additional software-functional modules. In contrast to the training and combat aircraft of previous generations, the Yak-130 does not have electromechanical instruments in the avionics. It implements the concept of the so-called "glass cabin", which makes it possible to simulate the information and control fields of the cabins of various types of combat aircraft. This complex includes multi-functional consoles, integrated control systems, intelligent liquid crystal and collimator indicators.

The fully electrically-controlled digital integrated control system, created by one of the leading scientific centers of KRET, the Moscow Institute of Electromechanics and Automation, performs the functions of automatic control systems and flight safety. The programming mode provided by the system makes it possible to change the piloting and dynamic characteristics of the Yak-130 to simulate the flight characteristics of almost any modern combat aircraft.

Airborne combat simulation system integrated with the control complex weapons SUO-130, developed by the Kursk enterprise KRET Aviaavtomatika, allows the training of pilots to eliminate the need to use real bombs and missiles, while maintaining the realism of the display of combat mission events. An emergency operating system for collecting and recording flight information was also produced in Kursk.

The modern integrated control and alarm system implemented in the avionics complex simplifies the operation and maintenance of the aircraft, displaying all the necessary data on the state of the engine and components, displaying warnings and recommendations on indicators. Installed on board the Yak-130, the SUOSO-130 airborne equipment control system developed and manufactured by the Ulyanovsk Instrument Engineering Design Bureau, also part of KRET, is responsible for collecting and displaying information on the status of all the avionics systems, sensors and actuators of the aircraft.

Universal flight characteristics of the Yak-130, including those achieved thanks to advanced modern solutions implemented in aircraft avionics, make this machine the best training complex in the world for mastering the latest Russian-made fighters.
Ctrl Enter
Noticed oshЫbku Highlight text and press. Ctrl + Enter
We are
ARMY-2016. The latest complex of biological protectionConcern "Radioelectronic Technologies": supplies and developments
Military Reviewin Yandex News
Military Reviewin Google News
3 comments
Information
Dear reader, to leave comments on the publication, you must to register.