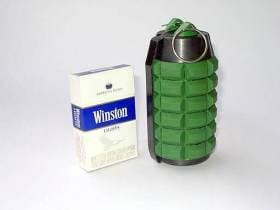 Specialists of the Ukrainian research-and-production enterprise (NPP) VALAR created a Kevlar grenade of non-lethal action B-10, Rosinformbureau reported, citing the director of the enterprise Valery Artsikhovsky, academician of the Ukrainian Academy of Sciences. According to him, the grenade is a proprietary, has no analogues and is designed for use by police and special units.


The grenade is a hollow cylinder, the outer side of which is divided into separate rubberized segments, with a powder charge and a stabilizing parachute inside. After the throw, the parachute automatically gives the B-10 grenade a vertical position, which ensures that the powder charge is triggered when meeting with the ground. The body of the grenade is torn into pairs of segments interconnected by flexible cords from material “rusar”, which, when meeting a person, wind around him and restrain his movement.

Non-lethal ammunition is equipped with two fuses that prevent spontaneous operation. The first, in the form of checks with a ring, is pulled out before the throw of the B-10, and the second serves to automatically undermine the powder charge upon striking the ground.

By the effectiveness of the impact, the Kevlar grenade can be compared with the actions of at least 10 police officers. This, according to Valery Artsikhovsky, is confirmed by the calculations and results of the tests performed. When a grenade is blown up, 36 striking elements are formed, 23 mm caliber and 20 g mass each, interconnected in pairs of 3-meter cords. With an initial speed of elements 21 m / s and energy 100 J, the radius of destruction of the grenade reaches 10-15 m. With a mass of 0,5 kg, the average throw distance of the B-10 is 30-40 m.