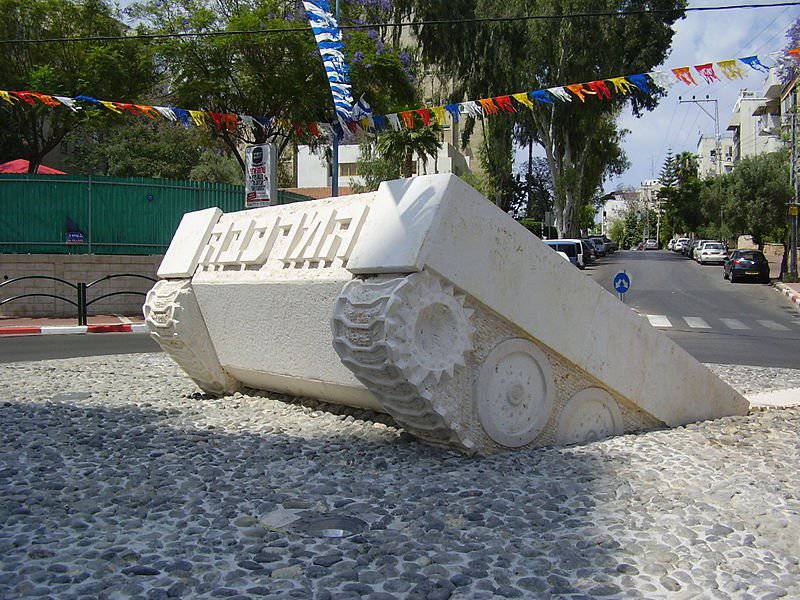 At the end of the material on the design vulnerabilities of Merkava Mk.4, it seems appropriate to consider the capabilities of the AOI main combat vehicle to counter tanks probable opponents. The presence of such a function corresponds to the basic principle of classifying a combat vehicle as a class of main battle tanks.

As already mentioned, throughout its entire military career, starting from 1982, not a single modification of the Merkava has encountered in battles with enemy tanks. Therefore, the consequences of such a confrontation can be assessed on the basis of the technical features of tanks with front or rear MTO, as well as the natural features of the Middle East theater of operations (theater of military operations), on which the Merkava design was originally oriented according to the statements of the tank developers.

As a prototype of the tank "Merkava" was used experienced American light tank T92, developed in 1956 year and did not go into a series of test results. The prototype differed from all previously known tanks, not only by the front-mounted logistics, but also by the presence of the stern door for the crew entry / exit. In addition, the T92 turret was notable for its particular compactness - the size of the carriage, equal to the diameter of the hull shoulder strap, exceeded the dimensions of the turret itself, which included a central casemate of a cannon and two separate armored tanks of the tank commander and gunner.

In accordance with the standard approach to designing front-drive tanks and in order to compensate for the overweight and mechanical armor and frontal armor, the center of rotation of the T92 turret was significantly shifted back — a quarter of the length of the track surface. This made it possible to ensure uniform load on all track rollers of the tracked propulsor. 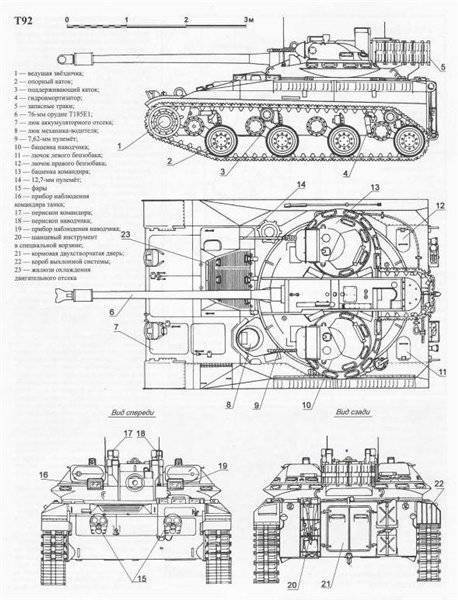 Without having their own experience in designing armored vehicles and guided by I.Tal's idea of ​​the crew’s protection priority over machine protection, the Merkava developers uncritically chose the above light tank as a prototype of the future main battle tank, the design weight of which exceeded the weight of the Т92 three times, length - almost doubled.

In addition to the increase in weight and dimensions, two more differences were made to the project:
- the height of the hull was significantly increased, and the apparent height of the tower was reduced;
- the center of rotation of the tower was significantly moved forward, its geometric location shifted back from the center of the bearing surface of the tracks only seven percent of its length.

The total height of the Merkava Mk.1 tower was a large amount, on the order of 800 mm. The tower was sunk into the hull so that an annular protrusion near 200 with more than millimeters formed inside the fighting compartment, which makes it difficult for the loader to unload shots from refractory containers behind the tower projection. This decision (to reduce the height of the tower by increasing the height of the hull) was chosen from the idea that the main target in the tank is the tower, which corresponded to the statistics of the distribution of hits in the tanks at the beginning of 1970-s. 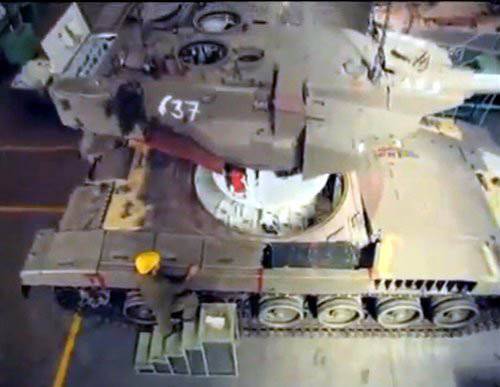 The shift of the center of rotation of the tower closer to the center of the track surface corresponded to another idea of ​​I.Tal about expanding the functionality of the main battle tank and introducing into it an additional compartment intended for the reserve crew, infantry landing or evacuation of the wounded from the battlefield.

As a result of the extraordinary choice of the prototype and the ambiguous design solutions, the Merkava has a number of differences from foreign main battle tanks.
The height of its hull is 1860 mm, which by 300-400 mm exceeds the height of the hull of the Abrams М1 tanks (Egypt), the Abrams МХNUMX А1 SEP (Saudi Arabia), T-2 (Syria) and T-72С (Algeria) tanks. 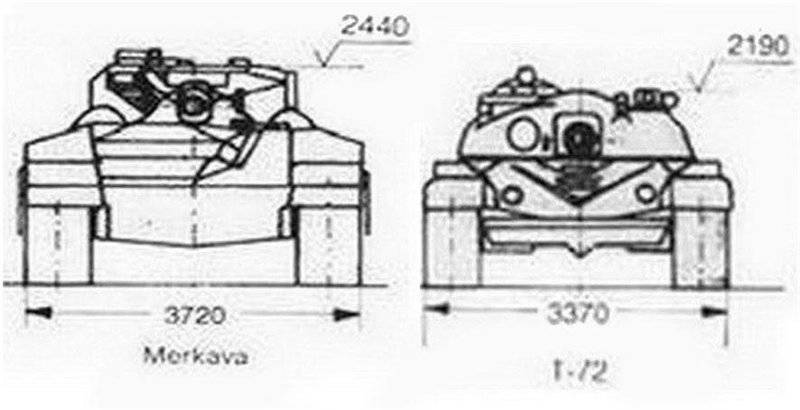 It should be borne in mind that in the 40 years since the beginning of the development of the Merkava, the statistics on the hit of armor-piercing shells in tanks has changed significantly. Using the increased ballistics of cannons and modern fire control systems, they now mainly aim at the hull and not at the tank turret.

The dimensions of the forehead of the Merkava hull are 2200 on 1330 mm, while the height of the upper (WLD) and lower (NLD) parts are approximately equal to each other. The hull and the tower are made of cast walls 76 mm thick. The slope of the front surfaces of the tower and NLD is of the order of 75 percent. In the latest version of the Merkava Mk.4, the turret, the hull sides and the NLD are additionally protected by mounted composite armor modules, which are several layers of metal sheets with ceramic or polymer filler.

Protection of the most fired frontal projection of foreign tanks reaches the equivalent of 1000 and over mm steel armor. This is achieved by using built-in combined armor with elements of depleted uranium, like the Abrams’s M1 A2 SEP 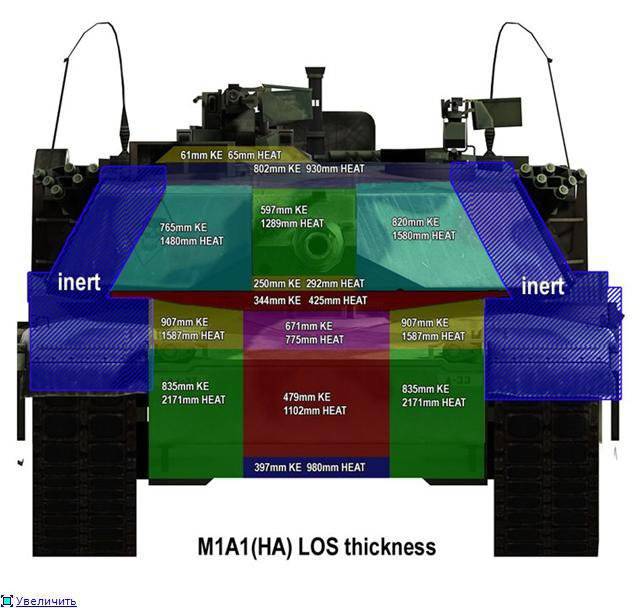 or built-in combined armor with external dynamic protection, like the T-90C 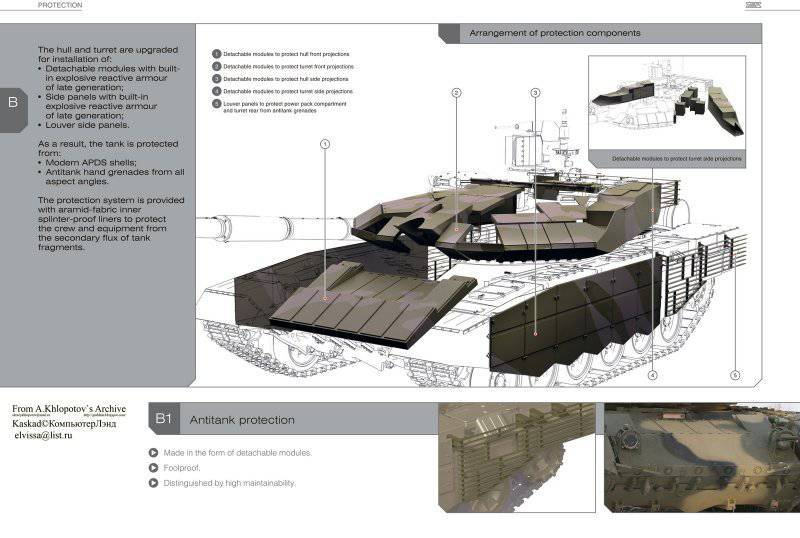 The use of this type of protection, which is distinguished by its great weight, is unacceptable for the Merkava, since the center of gravity of the machine is already shifted forward due to the front logging and the refusal to shift backward of the tower. But its main drawback lies in a more fundamental circumstance, which was laid down at the time of the selection of the prototype - the engine block with the transmission as such is included in the defense of the tank.

According to the experience of the last large-scale military operation - the war in Iraq 2003, where tank battles took place between the opposing sides, fire contact took place at a distance of 2 and more than a kilometer. It is on this and greater distance that the structural protection of the frontal projection of modern models of main battle tanks is provided.

Analysis of armed conflicts shows that in areas with desert-flat nature of the relief, in wide valleys located between mountains, in the foothills, when located at commanding heights (namely, this relief is different Israel and its neighboring countries) tanks can be observed at distances up to 3 -4 km. Using the advantages of the terrain in the conduct of hostilities, which, among other things, includes taking positions that provide maximum sectors and range of view, is one of the basic conditions for successful combat. Therefore, for the above types of terrain, there will always be situations where there is the possibility of detecting and firing targets at long ranges.

As a result of the increase in the range of fire contact, the Merkava, originally created under the conditions of a particular theater, turns out to be in an extremely disadvantageous situation. - starting with 2 and over km, the shells of her guns do not pierce the frontal armor of foreign tanks, while the shells of the guns of her opponents pierce the armor of the Mercury lines at the distance to 3 km, NLD armor - at the distance to 4 km.

Of course, after penetrating the frontal armor of the hull, the shells at best get stuck in the engine or transmission of the Merkava Mk.4, but the consequences of this are incomparable with the consequence of sticking of shells in the frontal Abrams armor М1 А2 SEP or Т-90С. “Merkava”, unlike its likely opponents, not only loses its course, but also loses the ability to conduct automated firing of the gun, since the engine generator no longer generates electricity, and the power of the auxiliary power unit and the battery is not enough to simultaneously power the turret drives and guns, gun stabilizer, mechanized unit pack, fire control system and thermal sight and sight devices.

Of course, the crew of the tank can go to the manual drive of the turret and guns, but this means reducing the cannon more than an order of speed, as well as abandoning the target auto-tracking mode after it is captured by the fire control system, which sets the stationary Merkava with an inactive engine position compared to her opponents.

Completing the assessment of the “Merkava Mk.4” fitness to the local theater, it is necessary to mention one natural feature - most of its soils with a greater or lesser bearing capacity are located on a rocky basis, which allows tanks with high specific ground pressure to move without apparent effort over the mud and sand. This is due to a simple circumstance - caterpillars in soft or loose surface soil break through the track to the rocky base, after which the tank gets traction and the ability to move. 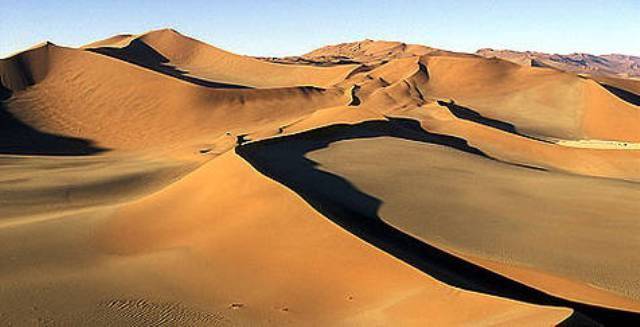 The “Merkava Mk.4” track width is 660 mm, the support surface length is 4520 mm, the support area is 5,966 sq. M, the average ground pressure is 1,17 kg / sq. Cm, compared to the 1,07 kg / sq. Cm for “Abrams »М1 А2 SEP and 1 kgf / sq. Cm for T-90С.
About a quarter of the Middle East theater area is a desert zone with sand dunes — the Negev region in Israel and the north of the Sinai Peninsula in Egypt. These areas with deep rock bedding are tank-inaccessible for the Merkava Mk.4, despite the fact that it seemed to be created specifically for the local theater of operations, unlike at least one of its potential opponents - T-90C.

As a result, we can note the actual folding of the Merkava production program over the past three years. In 2010, the tank, previously secret and "restricted to leave", was first presented at the Paris International Exhibition Eurosatory in order to attract foreign partners for joint development and sale. In 2012, the government of Israel also for the first time made an offer to a foreign state - Colombia - to acquire Merkava tanks. In May, 2013 was announced the completion of the state defense order for the production of new machines. As expected, before the end of the year in the defense industry of Israel, producing tanks, tank guns and accessories for them, can be fired up to 7000 people. The remaining workers and production facilities will be reoriented to repair and upgrade previously released machines.