21 2013 June
7
The article is posted on the rights of information cooperation. 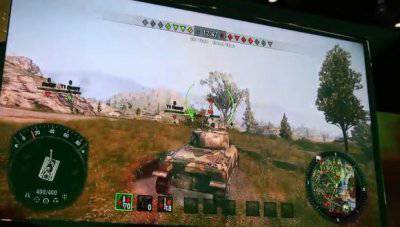 10 June 2013 - Wargaming, a leading developer and publisher of online games, is pleased to announce World of Tanks: Xbox 360 Edition is the first in stories company console project. MMO action is developed exclusively for the Xbox 360 and will inherit the best features of the original "World" tanks», Including excellent graphics, easy to learn and thoughtful gameplay. The game will be distributed according to the free-to-play model, enabling millions of Xbox fans to participate in online tank battles for free.

The development of World of Tanks: Xbox 360 Edition is engaged in the console division of the company, Wargaming West (former Day 1 Studios), the publisher will be the company Microsoft. To optimize the gameplay and use all the technological advantages of the platform, the game will receive a new control and an updated interface, as well as a revised balancer. Download the game client will be available to owners of both Gold- and Silver-accounts Xbox LIVE. World of Tanks: Xbox 360 Edition will offer players such premium options as premium tanks, consumables and premium accounts.

At the stage of open beta testing, World of Tanks: Xbox 360 Edition will present the American and German lines of tanks. Park technology will be significantly supplemented after the release of the game.

“Wargaming has always sought to try out new platforms for themselves,” said Victor Kisly, the head of the company. “We’re excited to partner with Microsoft and hope that Xbox 360 fans will appreciate World of Tanks.”

World of Tanks: The Xbox 360 Edition will be presented for the first time at the Wargaming booth as part of the world-famous E3 game show (601 booth in the South Hall), where visitors can be the first to get acquainted with the game.

Anyone wishing to participate in the beta testing of the game can apply for participation by clicking on the link www.worldoftanks.com/xbox.

* Owners of Silver-accounts Xbox LIVE will have free access to the game World of Tanks: Xbox 360 Edition for 7 days.

Wargaming is one of the world's largest publishers and developers in the free-to-play MMO market. The company was founded in 1998, and during that time managed to turn from a group of enthusiasts into an international corporation with 1600 employees and has released more 15 games.

Currently, Wargaming is working on a military series of MMO games dedicated to tank, air and sea battles of the mid-20th century. The company's flagship project, tank action World of Tanks, managed to win numerous awards from the leading gaming publications and become one of the most successful MMO projects. Air World of Warplanes is on the list of the most anticipated releases of the 2012 of the year. dedicated to warships, scheduled for 2013 year.