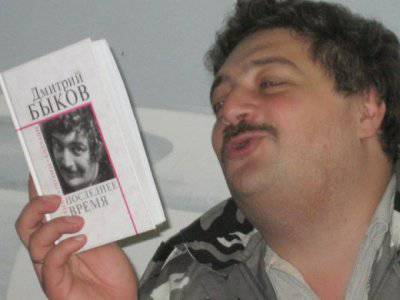 Get away the opposition from the streets,
His dangling box pulling.

We all merged, what touched ... - wrote our "marsh" writer D. Bykov after "draining the swamp." This time, he "leaked" the novel by L.N. Tolstoy "Anna Karenina", and threw Russia under the locomotive.

Speaking recently at a metropolitan get-together, our prolific writer who did not shy away from the dirty word found another reason to throw mud at Mother-Russia once again. It would seem, how can this be done on the material of the classic novel “Anna Karenina” by Leo Tolstoy? But D. Bykov was able to adapt Lev Nikolayevich Tolstoy to his sacred struggle against the "bloody regime." He managed to throw under the locomotive not only Anna Karenina, but also Russia, in his interpretation of the great artistic canvas of our genius.

“The motives of Russian statehood are vile, because they are false,” - publicly, speaking to an audience, said D. Bykov, as fake Karenin, Anna’s husband, who, according to Bykov, personifies the Russian state. Anna Karenina is Russia itself, beautiful, but restless, living a double life, torn between a hateful husband - the state, and liberalism, that is, the liberal lover, who is Vronsky.

“Life is gone from the hands of the authorities!” - D. Bykov exclaims when Anna-Russia leaves her hateful husband, Karenin-state, and throws herself into the arms of the Vronsky-liberal. “But the liberals are too timid ...” - explains D. Bykov the love drama of Anna and Vronsky, and the drying up of his “swamp”. One cannot but agree with the latter, but Vronsky is not at all timid, and he is by no means a liberal, but a count and adjutant wing! Had he found himself in the Bykovsky “marshland”, he would not have had a good time for this “marshland”, so that he had not to call the riot police.

... Yes, if you really want to lie, then the desperate rider Vronsky, who volunteered for the front, our honest writers, without blinking an eye, will declare a shy soul. The defender of the Russian state, a person of honor will be called the destroyer of this state, a liberal, and Russia itself and a locomotive are not sorry, and will be covered, mockingly smiling, with the authority of L.N. Tolstoy ...

Interpreting D. Bykov himself, one can say that his motives are foul, because they are false. In the novel “Anna Karenina”, Leo Tolstoy, I remember, said something completely different: “All happy families are equally happy, each unhappy family is unhappy in its own way”.

Ctrl Enter
Noticed a mistake Highlight text and press. Ctrl + Enter
We are
So leaked or not leaked?Split
56 comments
Information
Dear reader, to leave comments on the publication, you must to register.