For the first time, a prototype of the Tulpar tracked combat armored platform was presented by Otokar at IDEF-2013, which was held in Istanbul. The first model of the car was made in the form of BMP. The Tulpar infantry fighting vehicle contains a crew of 3s: a commander, a driver, a gunner, and 8 fully equipped soldiers. The mass of the sample presented at the exhibition in Istanbul is 32 tons, but the weight of the machine can be increased to 42 tons. This combat vehicle can be transported by air using the ATA A-400M Atlas transport aircraft developed by Airbus Military (Airbus Militi). In 2013, Turkey should receive the first production aircraft of this type.

This BMP was created by the same company that worked on the creation of the Altai MBT. After the 3 years of design work and development, the new combat vehicle was introduced to the general public and became one of the most significant innovations of this year at the international defense exhibition IDEF in Istanbul. Despite the fact that the Turkish army has not officially come forward with the requirement to create a new BMP, the company Otokar decided to “go ahead” in advance, knowing full well that such a machine would be necessary to support the new MBT on the battlefield. As a result, Turkish engineers launched the creation of the BMP Tulpar simultaneously with the Altay tank. 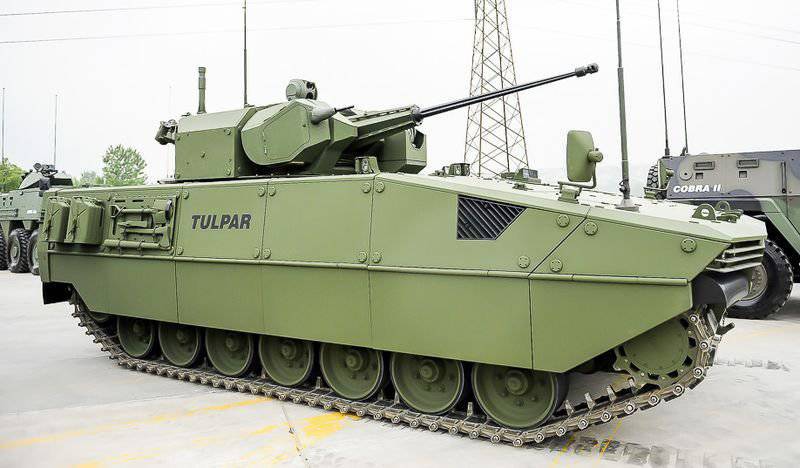 The BMP Tulpar is designed to solve two main tasks - providing fire support to the allied tanks and the safe transportation of soldiers in the conditions of modern combat in areas of high danger. When creating the design of a new BMP, Turkish designers considered among the main priorities the protection of the crew and the landing force against small mines and improvised explosive devices. In addition, the car has a good ballistic protection and is able to maintain network communications with the main battle tank Altai and other ground forces.

The BMP Tulpar was created with the aim of meeting the potential needs of the ground forces of Turkey in armament of this class, as well as for exporting to all possible potential customers. Until the end of 2013, the new combat vehicle will undergo a series of factory tests, which are in many ways similar to the tests that the Altay tank is passing. It is assumed that the serial release of the new BMP can begin in the 2015 year. According to some information, the land forces of Turkey can initially order up to 400 of such BMPs in order to supplement the first batch of 250 with the Altai MBT. Already now Azerbaijan is called as one of the potential buyers of this BMP. According to preliminary information, the cost of one BMP is about 1,2 million dollars.

The Tulpar BMP demonstrated at IDEF-2013 was equipped with a remote-controlled Mizrak-30 combat module (Mizrak-30), which is also a development of the Otokar company. The armament of this module includes an 30-mm automatic cannon and an 7,62-mm machine gun paired with it. Also included in the combat module are 4 advanced L-UMTAS anti-tank guided missiles with a laser guidance system. These anti-tank missiles are designed by the Turkish company Roketsan. By its ideology, the Mizrak 30 combat module is very close to the combat module installed on the German Puma BMP. Experts, as already stated above, see in the Turkish BMP a clear imitation of the German counterpart. It is noteworthy that the combat module Mizrak-30 can also be installed on the new Turkish wheeled armored personnel carrier ARMA, in the version with the wheel formula 8х8. 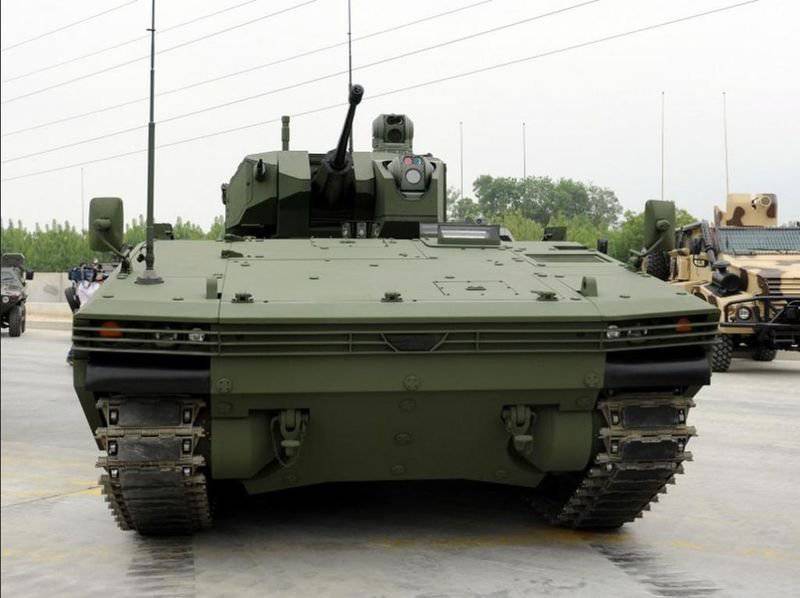 The 30-mm automatic cannon ammunition consists of 400 projectiles (200 are already in ammunition tapes, another 200 is in laying in front of the combat vehicle behind the engine). Remarkable is the fact that the gun has a two-sided projectile feed. The process of loading the gun in the combat module is carried out under the protection of armor. The ammunition of the 7,62-mm machine gun paired with a cannon consists of 400 cartridges loaded with ribbons, plus 4000 cartridges that are located inside the BMP housing. The sighting equipment installed in the combat module allows you to conduct combat operations at any time of the day.

BMP Tulpar equipped with modular armor. Therefore, the mass of the BMP can vary, reaching 42 tons, depending on the degree of protection established. The main composite armor of the Turkish BMP provides the crew and landing force with universal protection against ballistic ammunition 14,5 mm. At the same time, in the frontal projection, the combat vehicle is better protected, the frontal armor is able to withstand 25-mm armor-piercing shells. The use of a modular design allows you to quickly replace any damaged armor panel, and also makes Tulpar easily updated machine by installing additional armor plates, saving from larger-caliber ammunition. Foreign customers of the BMP "Tulpar" can decide in advance what level of protection is desirable for them, based on the specific operating conditions, the prevailing terrain and the configuration of the combat vehicle.

According to unofficial information, the new BMP is able to withstand the blasting of 10 kg. TNT anywhere under the hull. A Tulpar BMP with a maximum extra reservation can easily be considered as a heavy BMP. With the installation of additional modules of armor, its mass grows to a value that becomes comparable to the mass of the famous Soviet MBT T-72. In addition, the infantry fighting vehicle has a collective defense and fire extinguishing system. In the future, Otokar plans to install one of the developed active protection systems on Tulpar. 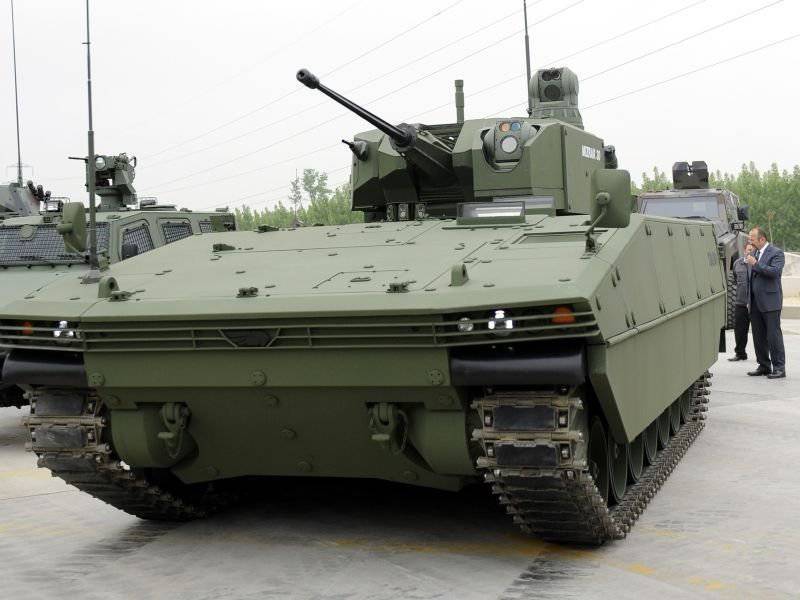 Otokar claims that the BMP can be equipped with 2 engine types: Scania DSI 14 or DSI 16. The engine compartment is located in the front compartment of the combat vehicle. The cruising range of the BMP is 600 km, the maximum speed on the highway is 70 km / h. In the version with an eight-cylinder V-shaped diesel engine Scania DI 16 Turbo with a volume of 15,7 liters and a capacity of 810 hp, the BMP is equipped with 32-x high-speed mechanical transmission. BMP Tulpar suspension torsion bar using hydraulic shock absorbers. The equipment installed on the BMP provides the crew with awareness of the evolving combat situation in the 360 degrees sector. The machine is equipped with a standard onboard system of chemical, radiation and biological protection.

Tactical and technical characteristics of the BMP Tulpar: