"The war in Syria could spread to Russia and Ukraine ..." 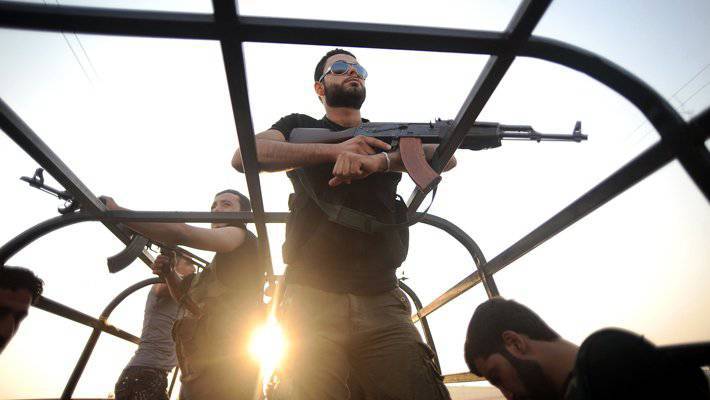 A month ago, the head of the All-Ukrainian Union of Homeless Officers, a veteran intelligence officer, Colonel Sergey Razumovsky, took the initiative to form a volunteer Russian-Ukrainian expeditionary corps and to assist the Syrian Arab Republic president Bashar Asad in restoring constitutional order.

“Ukraine does not need officers or troops! The situation in which the veterans of the armed forces are is no longer tolerable, so we have the right to offer our blood and skills to another country. In exchange, we ask the Syrian government a little: to give us citizenship, to provide insurance to our families and help us with investments in housing construction where each of us decides to live after the war ... "

Sergei Razumovsky told us about his current situation with the formation of the expeditionary corps and his vision of the situation in Syria.

- What is the response of the citizens of Ukraine and Russia (first of all, reserve officers) to your call to take part in the Syrian war?

- Response? In Ukraine, we are ready to support a lot of officers and soldiers, both in stock and in service. Similarly in Russia. I think that we will be able to demonstrate this in the near future, having gathered for the first field gatherings.
Another thing is that we have an order of magnitude more youth appeals - guys from 19 to 30 years. The guys who do not see any other prospects for their future. We really have a lot of them - a few thousand - both from Russia and from Ukraine. And this is a big problem. In order to lead them anywhere, they need to be prepared. We are working hard on this problem now, I think we have no other way out as the creation of training camps.

- What is the reaction to your initiative of the Foreign Ministry of the Russian Federation, Ukraine and the government of Bashar Assad?

- The reaction is predictable. Ukraine is busy with another problem, how to join the European Union and the Customs Union at the same time, without ceasing to divide everything that remains from the USSR, and not seeing the main threat - a firmly enforced policy on the breakdown of civil peace and stability, which is quite possible call a special operation. The Russian Federation takes a wait-and-see position, which is understandable - indeed, how many over the years have 20 Ukraine put forward initiatives? We can not even think of this.
As for Assad ... The Syrian Ambassador to Ukraine, in an interview with Inter TV channel, said that, most likely, the president would refuse. But there was no refusal. Why? Yes, because the war allies are not scattered. Who knows how strong his position will be tomorrow. The fact that the war will not end soon is obvious.

- Are you ready to engage in the creation of a volunteer corps and if the reaction of the Syrian authorities does not follow? What then will be the mechanism for sending volunteers?

- We are ready for anything. A few days ago, we turned to the United Nations with the idea of ​​creating a UN peacekeeping force from volunteers, not from army contingents of any powers. This idea has a future, because the current structure of the world, and especially what is called international law, has completely exhausted itself.
And judging by the threats to our address that appear on various extremist websites, we may be necessary and not reaching Syria. You probably know that 6 June in Simferopol at the Hizbut at Tahir rally adopted a policy of restoring the Arab caliphate and, by the way, also recruited volunteers to Syria. In addition, the other day a statement was made by the mufti of Russia about the same thing that we are talking about all the time - the war in Syria can spread to Russia, Ukraine and the Caucasus ...

- How, from your point of view, has the tactics of warfare changed by militants lately, and what do you think are the main mistakes of the Syrian command in suppressing the terrorist activities of the militants?

Their tactics have changed significantly since the times of the war in Afghanistan and Iraq. If earlier, strictly speaking, the war was waged by volunteer detachments, hastily prepared by some sort of instructors, today all this extras in turbans and with machine guns are just a television picture. The real war is fought by professionally trained groups, the very same special forces of Great Britain, for example, etc. This tactic is successful. This tactic practically knows no defeat, starting with the partisans of the Great Patriotic War. The founder of the theory of such actions may well be called the White Emigrant Mesner with his famous book "Mutual War".
And the question of the notorious money has also changed. And this is the main issue of the opposing system. If in the early nineties the tactics of bribes worked out - the top of the USSR, the same Yugoslavia, was bought, then in Iraq they faced the fact that the money devoted to the new Iraqi collaborators immediately fell into the hands of their relatives and again pressed the roadblocks, causing a new wave financing. When money began to count on sea containers, zakazniki thought. Already in Afghanistan, there was an attempt to organize cost accounting - the Afghans were allowed to produce the drug, and the whole operation was funded from its sale, but this also did not save ...
Perhaps, the first operation of a new type was an operation in Libya, which showed samples of the “combat television picture”, as well as the transition to strictly speaking instability, in which the seizure and retention of any territories, the content of controlled governments is not the goal. Only objects of interest are held — for example, oil fields, transportation routes and ports. The rest of the territory unleashes a war of all against all. And the more and longer it lasts, the more profitable the owners of the militants. This, in my opinion, is not well understood in the leadership of Syria.
They are destined to chase mobile groups for a very long time, which you can recruit and throw in hundreds. And to fight them with traditional methods - you have to spend an infinite number of resources, drive army equipment, waste ammunition, etc. This is almost the same as trying to fight back in the taiga from a flock of mosquitoes. No one to beat, fists are useless. In this regard, the supply of any C-300 or something else like that is useless. Against scattered guerrilla groups is not a means.
Syria will not have enough resources for such a war. The same, in principle, applies to Ukraine. And if we talk about the main enemy of our countries, then he simply issues resources using ink and paper ...

- Experts for the most part believe that the delivery of C-300 complexes by Russia to the Assad government has a purely psychological significance and, in the event of a full-scale invasion of Syria from the outside, these complexes, without proper support, will be useless ...

- I honestly doubt that such complexes are or will be delivered. No serious conflict with West, the Russian ruling government will not go. For all known reasons, which are absolutely clear. By themselves, these are wonderful complexes. Russia in this sense is an absolutely notorious country. But! Is the USSR was armed not the most modern weapons? And was he defeated by arms? I do not think that the role in the Syrian war will be high aviation. In addition, if an aerospace strike is decided to strike, it will be delivered, and several S-300 installations will not reflect it. The most effective remedy for such attacks, an asymmetric response. But these are other technologies that we will not talk about here.

- Are there many mercenaries fighting in Syria, immigrants from the CIS, primarily from the Russian Federation and Ukraine?

“You see, the modern war has long since moved away from the concepts of many or few. The epoch of heroic wars with the mass death of servicemen is a thing of the past. Today it is an emphasis on modern, often robotic technology and on the actions of special forces. The Americans took into account the experience of the Soviet troops in Afghanistan. They included only special forces.
Hence, if it is known that, for example, from 200 people are fighting from Russia in Syria on the side of the militants, how can one assess this much or little without knowing the level of their training? For example, I can say that special forces units of such a number can turn any country into hell. How many Ukrainian citizens are there? Surely no less, it is difficult to follow. Mostly people are hired by private military companies to work in the same Afghanistan. But then they can be transferred anywhere ...

- How are the unrest in Turkey related to what is happening in Syria? And how will the situation in the region change in the event of the overthrow of the Erdogan government?

- I believe that they are directly related. Edorgan is somewhat lost. On the one hand, Turkey is a member of NATO, a springboard so to speak. On the other hand, it tacitly supports all Muslim movements, among which there are many enemies of NATO. Perhaps my theory of conspiracy is dominant, but the recent detention of terrorists with chemical weapons is the breakdown of a scandal operation that has been planned for a long time. He was not forgiven.
Overthrow is not a simple question and I do not think that everything will be so simple. Most likely, the zone of instability will smoothly reach the borders of the former USSR. And then everything will depend on us. By the way. something like the message about the annexation of a part of the territory of Tajikistan by China was taken for granted. And nothing happened and happened ... So a start has been made. I think that the rebellion, which like a fire in the forest wind stories drives in our direction - it will not stop at the borders. There is plenty of fuel in the Caucasus, in the Russian Federation, and in Ukraine: Crimea, Transnistria, and Transcarpathia. The only question is when?

Ctrl Enter
Noticed oshЫbku Highlight text and press. Ctrl + Enter
We are
A closer look to the EastMilitary reform as an integral part of the security concept of the Russian Federation: Systematic dynamic assessment
73 comments
Information
Dear reader, to leave comments on the publication, you must to register.