Colombia - a foothold for US operations against Venezuela 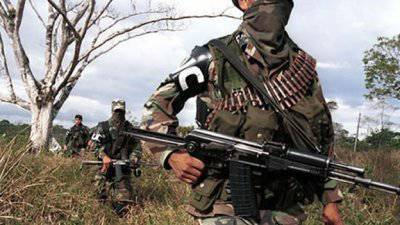 The arrests of the Colombian "paramilitares" in Venezuela are not perceived as sensational. There are more such cases. The reasons why the militants methodically, skillfully disguised as merchants, seasonal workers or tourists, penetrate the country do not raise questions. They are used by the enemies of the Bolivarian Republic of Venezuela in the framework of a wide conspiracy coordinated by the special services of the United States and NATO countries to overthrow the legally elected government.


Previously, the Paramilitares fought in the ranks of the AUC, the United Colombian Self-Defense Forces, created by the Colombian military intelligence to counter the methods of terror by the left-Marxist guerrilla forces of FARC and ELN. The formal “disarmament” of the AUC in Colombia did not lead to their complete demobilization. Now they are used to combat the "populist" regimes. A significant part of the AUC units was “re-targeted” by the CIA residency and advisers to the US military mission to address the specific tasks of destabilizing Venezuela. Only in June in the states of Tachira and Portuguesa were captured two groups of "paramilitares", whose leaders are well known in Colombia for their bloody "feats". There is an active search for militants of the third group, which operates in Caracas. There is evidence of the presence of other armed AUC cells operating in the country. As stated by Venezuelan Interior Minister Miguel Rodriguez Torres, the investigation showed that the “paramilitaries” kept in touch with the ultra-right circles of the Venezuelan opposition and prepared an assassination attempt on President Nicolas Maduro. Seized explosives, arsenal of firearms weapons, including a Buschmaster rifle with a telescopic sight, dozens of boxes with cartridges, grenades, Venezuelan military uniforms - direct evidence of this.

Similar events in Venezuela were already in 2004, when law enforcement officers in the vicinity of Caracas arrested 150 "paramilitaries" who had entered the country to attack the presidential palace, kill Hugo Chávez and imitate the "uprising" of the military, in order to facilitate the seizure of power by radical opposition. At the present stage, internal and external conspirators place emphasis on inciting public discontent with the artificially created shortage of essential goods, hiding them in secret warehouses or smuggling into neighboring countries, primarily Colombia. Venezuela’s media continues to fan the topic of “rampant crime” and “the inability of the government of Nicolas Maduro to cope with it.” For this, in particular, falsified “murder statistics” are used. Numerous facts of the involvement of professional Colombian "killers" in the killings in the border states of Venezuela are ignored. According to the police and counter-intelligence agencies of Venezuela, terrorist actions of this kind in Caracas and other major cities are encouraged by the US special services.

The “fifth column” was particularly active in the oil state of Zulia, which is traditionally considered to be “separatist”. The residencies of the CIA and US military intelligence in Colombia over the past years carried out measures to strengthen the "centrifugal tendencies" in the state, spurring local elite conflicts with the central government, promoting to the "popular masses" the thesis that "Republic of Zulia" will have a higher standard of living as an independent state. The actions of sabotage in Zulia have indeed become alarming. President Maduro has recently and repeatedly met with the governor of the state of Francisco Arias to discuss measures to curb the smuggling of gasoline and food products, to establish an uninterrupted power supply, which is extremely important for this hottest region of the country.

Further destabilization of the border states of Venezuela and the growth of protests of the radical opposition in Caracas should become a pretext for the direct intervention of the United States in the internal affairs of the country. To this end, the necessary supporting infrastructure has already been created along the perimeter of the border with Venezuela. The pilots of the United States in the framework of the joint Colombian-American exercises thoroughly mastered the theater of future operations. In a recent publication on the website Aporrea.org, photographs of the contrails of combat aircraft were displayed, which worked off attacks from Colombian territory in the direction of Venezuela. In a number of cases, American intelligence officers used drones for “operational tracking” of Venezuelan territory and identifying the location of mythical partisan camps.

The famous Venezuelan journalist José Vicente Rangel reported that the opposition intends to acquire combat aircraft, which will be used for the armed seizure of power. In late May, representatives of the “irreconcilable opposition”, including the former leaders of the state-owned oil company PDVSA, held talks on this issue with members of the directorate of one of the aircraft companies in San Antonio (Texas) and signed a contract for the supply of vehicles no later than November of this year. Rangel noted that the aircraft will be deployed at one of the US bases in Colombia and used in the aggression planned against Venezuela with the involvement of mercenaries.

Against the backdrop of a heightened anti-Bolivarian campaign, Colombian President Juan Manuel Santos held more than an hour-long meeting with former Venezuelan presidential candidate Enrique Capriles. As it is known, Capriles refused to recognize the election results, called on supporters for active protests, which resulted in the death of fifteen Bolivarians. The hostility of the position taken by Santos is more than obvious to Caracas. According to reports, the Colombian agreed to meet with Capriles on the recommendation of Washington, who, through Vice President Joe Biden, promised Santos generous “compensation,” including through the deepening of Colombia’s cooperation with NATO. Santos took this promise with optimism unjustified for such an experienced politician and said that negotiations on joining the North Atlantic Alliance would begin soon: “Already this month, NATO will sign an agreement with the Colombian government and the Ministry of Defense to initiate a process of convergence, cooperation with an eye to our entry into this organization. "

Protests were not long in coming. The ALBA member countries (the Bolivarian Alliance for the Peoples of Latin America) unitedly opposed these plans of the oligarchic circles and the military of Colombia, fraught with upheavals for the entire region. NATO is an instrument of imperial expansion. Swinging open the door for this organization is a crime. It is enough to name the countries subjected to the "democratizing bombardments" of NATO - from Yugoslavia to Syria, to recall the millions of victims and the terrible destruction in Europe, Asia and Africa, in order to understand the acuteness of the indignation that swept through Latin America. NATO representatives disavowed Santos words in Brussels: "We remember the merits of the Colombian special forces in operations in Afghanistan, but for formal reasons, because of the geographical location of Colombia, not adjacent to the North Atlantic region, its full membership in the Alliance is impossible."

The Colombian leadership had to adjust the position. Secretary of Defense Juan Carlos Pinzón stressed that Colombia claims only to follow the lead of New Zealand, Australia and other countries and to build a partnership with NATO.

There is no doubt that Colombia’s readiness to deepen the “partnership” will be tested by Washington and the Pentagon on the fronts of the struggle against the “Bolivarian regime”. The main goal is by no means inflicting military and political defeat on the regime in Venezuela because of its supposedly insufficient democracy and neglect of human rights. We are talking about the capture of Venezuelan hydrocarbon deposits, the strategic nature of which for the fate of the empire is not in doubt. Analysts in Venezuela often say that disastrous forecasts of the depletion of global oil, gas and oil shale reserves are irrelevant to their country. In the underground storage of Venezuela and its marine shelf, hydrocarbons, even with intensive exploitation, will last for many decades. That is why the United States prefers a force option to resolve problems with Venezuela. Instead of building civilized relations with the legitimately elected Bolivarian government, as many countries whose oil producing companies operate successfully in Venezuela, Washington considers power to be the main argument for "dialogue." Pentagon, Southern Command with its Fourth fleet and special services that have thoroughly mastered the technique of total terrorism - all this is involved by the empire in the Venezuelan direction.

In these circumstances, the treacherous role of the ruling circles of Colombia in relation to the integration processes in the region, the further development of Latin American regional organizations, as well as the implementation of the South American security system project of a defensive nature is becoming more and more obvious.

Ctrl Enter
Noticed oshЫbku Highlight text and press. Ctrl + Enter
We are
Colombia: the peace process or the conflict of drug cartelsRussia: the Moon, Mars and further everywhere ... Speeches of the participants of the Izborsky club in the corporation "Rosobschemash"
20 comments
Information
Dear reader, to leave comments on the publication, you must to register.