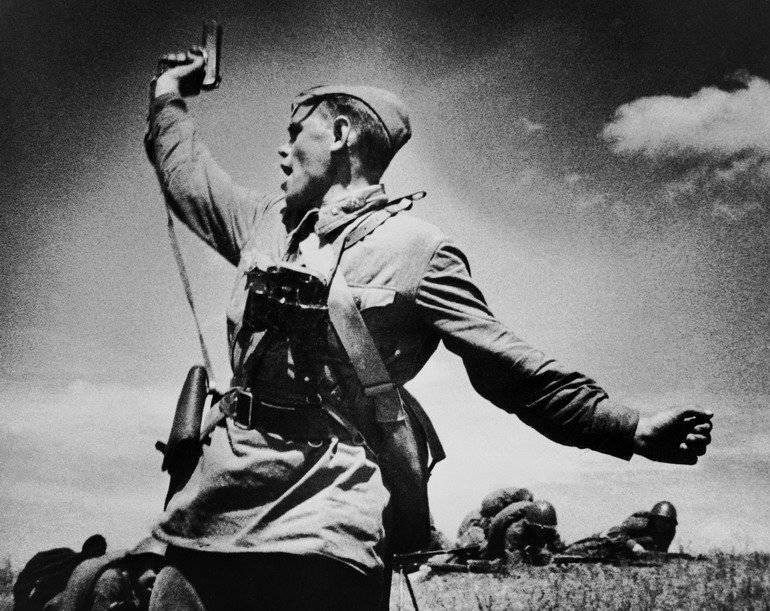 Novo-Petergofskoe military-political border school of the troops of the NKVD named after Voroshilov K.Е. (TLU) October 7 was formed 1937 of the year after the military commissars were established in the Armed Forces of the Institute, on the basis of the KE Voroshilov NKVD USSR Border and Internal Guard School. The head of the school - the regimental commissar Grigoriev. The school trained political workers for the border and internal troops of the NKVD. Duration of training 2 year. The school received ordinary soldiers and sergeants of the border and internal troops of the NKVD who had passed military service, and received excellent recommendations from the commanders of the units. After the start of World War II, the school switched to a shortened training program.

In connection with the aggravation of the situation on the outskirts of Leningrad 17 August 1941, according to the order of the commander of the Northern Front, the battalions of the cadets of the Novo-Petergof Military-Political School of the NKVD. K.E. Voroshilov received the task to put a barrier at the turn: the 1-th battalion under the command of Major N. Shorin. - collective Chukh. Antashi, Ozhogino, Volgovo, 2 Battalion, captain A.A. - Hulgizi, Pulevo, Smolkovo, Dylitsy. The Red Army units (1-i and 2-i guards divisions) acted in front, under the cover of which the battalions were supposed to occupy and prepare the defense ... , but the battery to the destination did not arrive and the battalion did not support the battle. An anti-aircraft battery was attached to the 2 th battalion. Both battalions operated independently and were operatively subordinated to the commander of the 76 Army, Major General Belyaev.

At dawn on August 18, 1941. The 1st battalion took up the defense and successfully repelled the advance and reconnaissance units of the enemy, and only the 4th company (Lieutenant Gamayunov), defending in the Volgovo area, was given the task to advance in the direction of Torosovo - Gubanitsa, August 18, 1941. was attacked in the evening tanks and enemy motorized infantry and partially surrounded. Roth groups went to join the battalion and 19 August joined the battalion. The commander of the company with two cadets out of the environment only 24 August. From the composition of the company did not return from the environment 21 cadet. The commander of the 1 Battalion, Major Shorin, who was defending himself in the Chukh area. Antashi was ordered to stop and form units of all the departing 1-th Guards Divisions of the Red Army. By August 22, two battalions were formed from departing units, teachers and officers were sent to command and political posts in these battalions, and they went to the front with the 1 battalion. It was supposed to organize a regiment from these two battalions and the 1 th battalion (Shorin), but subsequently the people were returned to the 1 th guards division. 20 and 21 in August, cadet border guards conducted reconnaissance raids in the area of ​​the villages of Bolshoye and Maloe Zhabino, Volgovo, Volosovo, where they had military clashes with the enemy. By this time, the enemy on Kingisepp Highway was forced to suspend the offensive, encountering unexpected resistance from border units. Taking advantage of the opponent’s indecision, Shorin makes a decision to counterattack. And over the next few days, the border guards drove the fascists out of the villages of Kotino, Bolshoi and Maloye Zhabino. Later, on the orders of the commander of the Kingisepp fortified area, "the further promotion of the regiment of the TLU to the south" was discontinued. The battalion was returned to its initial positions, and then 30 August was sent to the commander of the Koporskaya task force, Major General Semashko, the latter reassigned the battalion to the commander of the national militia Major General Lyubovtsev and sent to the Zabolotye area (in 2 km. northwest of the Russian Antashi), where the battalion arrived in 17-18-00 31 in August 1941. The enemy by this time in the area of ​​Koporye began to crowd the units of the 2 division of the national militia. To restore the position, the division commander sent a counterattack to the newly arrived 3 and 4 companies, which successfully counterattacked and rejected the enemy’s infantry, inflicting a great defeat upon it, destroying the enemy battalion. 3-I and 4-I companies lost in this battle to 60-70 people killed and wounded cadets and commanders. As a result, the battalion counterattack, with the support of the 10 BT tanks of the 271 Regiment of the 93 Infantry Division of the enemy, was dislodged from their positions in the Irgograd region and hastily retreated more than five kilometers. After a successful counterattack, the entire battalion was placed in reserve by the commander of the 2 bottom and took up defensive positions in the area of ​​Florevitsa. Ahead at the Gostilovo-Lasuni line, parts of the 2 bottom defended. It took the enemy several days to regroup and prepare a new offensive. During this time, units of the 8 Army managed to retreat along the Peterhof Highway, thereby avoiding the danger of being cut off from the main forces of the Leningrad Front. 4 September 1941g. parts of the 2 bottom had to transfer the sector to parts of the 125 rifle division and go to rest. During the change of units, the enemy launched an offensive and shifting units, without warning our battalion, began to retreat, thereby exposing the battalion’s location both from the front and from the flanks. Opponent after a powerful artillery and mortar training on the battalion went on the offensive and began to crowd the units that some groups began to depart in the direction of Voronino. In this battle, the battalion lost up to 120 people killed and wounded, 171 people did not return, and their fate is unknown. The main part of the battalion retreated to the village of Dolgaya Niva, where the border guards tried to gain a foothold, but under pressure from superior enemy forces, they were forced to retreat to the villages of Novaya and Gostilitsy, mined the fork of the Cheremikino-Oranienbaum road. Until September 7, the cadets defended Gostilitsy, covering the withdrawal of units of the 281 Infantry Division, after which they were taken to rest in the area of ​​the village of Big Iliki. But the enemy knocked out our units from the village of Porozhki and the command of 281-th SD, was forced to send cadets to eliminate the breakthrough. The fierce battles for Porozhki continued until the twentieth of September 41. The border guards seized the village several times, but due to lack of strength and lack of fire support from rifle units, it was not possible to build on the success of the counterattack. 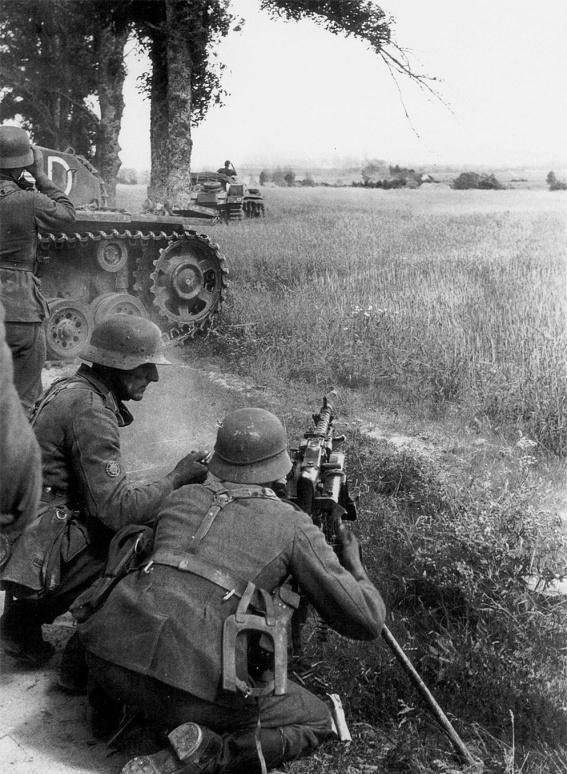 Due to the fact that the cadet battalion under the command of Major Shorin acted during September 41. in the 281 Rifle Division, the command of the 8 Army, contrary to the directive of the General Staff of the Red Army regarding the use of military units of the NKVD 2 in October 41. attempted to transfer the personnel of the battalion to the replenishment of the 1062 th regiment of the 281 th rifle division. Major Shorin was appointed regiment commander. However, as a result of the decision of the 10 October Military Council of the Leningrad Front, the front headquarters instructed the 8 A commander and the 1 school battalion to immediately withdraw from the battle and 281 sf commandment and send all the weapons, transport and property to the school in Leningrad to continue their studies interrupted by the battles. As of October 1, the battalion consisted of 68 cadets and 10 officers. 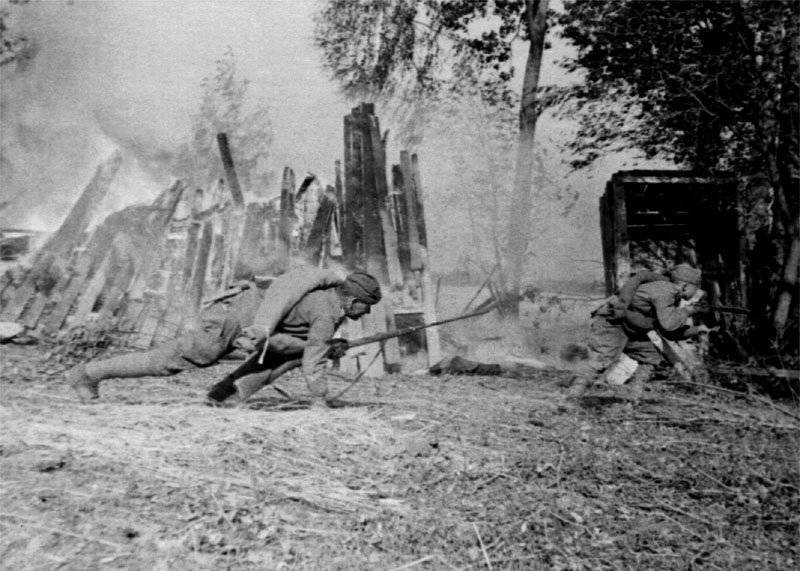 Starting from 23 in August and up to 1 in September, the cadets and commanders of the 2 battalion left small groups out of the entourage and on September 1 came out: cadets - 196, commanders - 9, in total - 205. The battalion commander captain Zolotarev, the authorized officer of the 3 division, senior lieutenant Safronov, company commander lieutenant Usenko, platoon commanders lieutenants Novozhilov, Pyatkov and others returned with them. Of the entire 2 th battalion, which at the time of the appearance at the front consisted of four companies in the number of 579 people, only 2 companies remained - 208 people. Of these, staff - 12, cadets - 196. Thus, the 2 Battalion lost 30 people killed, 80 wounded and missing people 261 people (among which are killed, wounded, surrounded by, detained by other parts), and only 371 people, or 64% of their composition . The losses of the battalion could have been significantly less if the battalion occupied a normal area of ​​defense, had sufficient technical equipment and adequate support from the neighbors. Unfortunately, all this was not. The task assigned to the battalion is to detain the enemy on the way to art. Elizavetino - Krasnogvardeysk a maximum of three to four days - the border guards performed, not allowing the enemy to advance within six days. Thus, it enabled the 126-th and 267-th separate machine-gun and artillery battalions, as well as parts of the 2-th Guards division of the national militia to take up the defensive positions of the Red Guard fortified area.

After the withdrawal from the battles, the cadets continued their studies in Leningrad, where in September 41. the school was evacuated. In November, 41. release took place. Most of the cadets were sent to the border and internal troops of the NKVD. About forty people commanded the command and party organization of the school to the military counterintelligence agencies, to special departments of the Leningrad Front. A part of the cadets were sent as political workers to replenish rifle and artillery units of the Leningrad Front.

Ctrl Enter
Noticed oshЫbku Highlight text and press. Ctrl + Enter
We are
Defenders of the frontiers of the empire. From the history of the Separate Border Guard CorpsThe role of commissars during the Great Patriotic War
Military Reviewin Yandex News
Military Reviewin Google News
8 comments
Information
Dear reader, to leave comments on the publication, you must to register.