24 2013 June
56
Stringer Bureau of International Investigationsthat unites intellectuals, political scientists, journalists - people who want to convey the truth about the United States to the world - speaks of the “homeland of democracy” as an invader state, deserter of legitimate governments, jailer, murderer of peaceful citizens, resource thief, print shop for producing green paper and bubble factory. Corruption is the basis on which the American state-corporate machine is built. 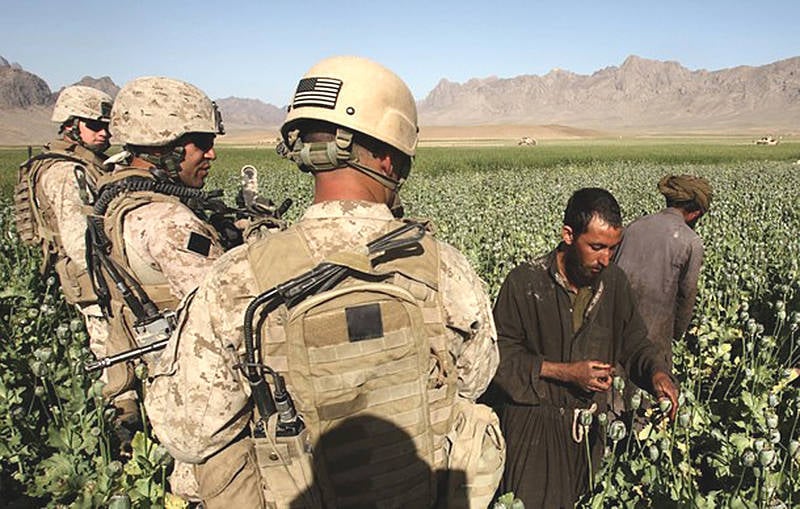 In a material from 9 Jun, called "Heroin with a taste of NATO", describes how the West put the opium business of Afghanistan on an industrial basis, thereby giving rise to a whole drug empire. And the Taliban are not at all opponents of the drug business, but its direct participants.

The elite district in Kabul, where people enter by pass, is called the “Green Village” (“Green Village”). The rich people who inhabited it became drug addicted. There are no other ways to get rich in Afghanistan (unless, perhaps, the omnipresent corruption is considered). This means not wealth according to Afghan standards, but real wealth according to Western criteria.

From the seeds of democracy in the 2001 year, abandoned in the soil with the beginning of Operation Enduring Freedom, the seas of scarlet poppies have risen. During the ISAF presence, the area of ​​opium crops in Afghanistan increased by a factor of a hundred, and the production of heroin by a factor of forty.

The members of the Stringers Bureau visited Green Village and visited one very wealthy and respected Afghan, who in the report received the name Said. He lives in a four-story mansion with fountains, white columns, gilded cornices and crystal chandeliers.

He explained that the Americans had never set themselves the task of combating the drug threat. The Taliban are involved in the drug business; the one who claims the opposite simply believes in a common myth. At the end of 1990, Said says, up to 35% of the revenues from the heroin business went to the Taliban. And thanks in large part to his ties with al-Qaeda, they managed to create a drug distribution network that, with the start of the American operation, completely ousted Myanmar, Laos and Thailand from the market. The reasons for the decline in heroin production by 2001 are the attempt of the Taliban to gain international recognition. They hoped to get decent compensation for “fighting the drug threat”, but instead received an invasion by coalition forces, explains Said. After the intervention began rapid heroin growth.

Just a year after the start of “Enduring Freedom”, the production of raw opium in Afghanistan grew by 1400 percent. Prior to the invasion, laboratory production was located in Pakistan, and with the “advent of democracy” in Afghanistan, a closed-loop cycle was established with an industrial scale.

How did these schemes work?

Western firms supplied the country with fertilizers, pharmacological equipment, and chemical reagents - in the form of humanitarian assistance to farmers and drug developers. Elite poppy seeds were supplied from America and Europe - business is business. Start-up capital to entrepreneurial “production workers” was not provided by the tycoons of the drug industry, but by solid Western banks. Kandahar has become a financial center serving the drug business. It is here that “farmers”, “pharmacologists”, and “transport workers” are credited. It also pays for sold lots of drugs.

If during the "humanitarian bombardment" the crops of the "agrarians" are suffering, the American democrats are forking themselves: they pay compensation in the amount of fifteen hundred dollars per hectare.

Income from heroin traffic is up to 80% of Afghanistan’s GDP. Nobody in the production chain thinks of teenagers dying from heroin.

One hectare of poppy field in Afghanistan today gives the same income as 40 hectares of grain crops. Local peasants did not think long in which direction to develop agricultural business.

The largest heroin transfer point in Europe is Kosovo. There you can find out how the military transport is used. aviation USA. A former employee of the United Nations Drug Control, a native of the former USSR, told the Bureau in Kabul, as it was in the mid-2000s. According to him, in a week, American cargo planes flew 800 flights from Afghanistan to their European bases. There was every reason to believe that military transport liners were used to smuggle heroin into the Old World.

In order to understand how the modern Afghan drug traffic works, the journalists visited one of the poppy plantations near Kunduz. After seeing how the case was arranged there, including logistics, they made conclusions.

Raw opium is grown everywhere in Afghanistan. It does not matter who is in charge of the area now: Italians, Germans, Americans. Collected raw materials are partially processed, partially remain raw materials and transported to factories in the provinces of Paktia, Khost, Helmand, Kunar, Balkh, Kunduz. After processing, diacetylmorphine hydrochloride is sent to Kandahar. Here with suppliers and carriers are determined further routes. From Kandahar, heroin is shipped to Pakistan, to the Chitral district, where chemical precursors are located. The most important precursor in a chemical reaction is acetic anhydride. Pakistan has a monopoly on the production of this component. From the environs of Chitral begins a full-flowing and navigable heroin river flowing into Southeast Asia and the CIS countries, and from there to Russia and Europe.

An employee of the Agency for Drug Control under the President of Tajikistan told reporters that every week he receives a kit with images of the territory of Afghanistan taken by the Cobalt photo reconnaissance satellite. Every month he reports to the Americans, the British and the government of Afghanistan. However, the West is not interested in this problem. They only pretend to fight heroin with the help of conferences. This is a hoax or sabotage against Russia and Central Asia, the employee said.

By the way, the main consumer of Afghan drugs is Russia.

About it is known from the annual report on the world drug control situation, published by the US State Department in 2011. The State Department directly stated: “Russia is the main destination for heroin flows from Afghanistan and an important market for traders in opium, hashish, marijuana, synthetic drugs and other dangerous prohibited substances”. According to the UN Office on Drugs and Related Crime, cited in this report, Russians use 70 tons of heroin per year, and the number of its consumers in the country reached 1,6-1,8 million people, or 1,3% of the population. And among them, the number of people infected with HIV reached 61% in some regions.

A year and a half ago, Viktor Ivanov, head of the Federal Drug Control Service of the Russian Federation summed up NATO activities in Afghanistan: “I would call three main results. The first is a phenomenal increase in drug production, more than 40 times, the second is the militarization of the region ... And the third result is a humanitarian catastrophe, political instability and expanded reproduction of the militants. ”

Earlier in the "Military Review" it was reported that the income of Afghan farmers alone exceeds 3 billion dollars a year (10-15% of Afghanistan's GDP). Opium poppy crop area in Afghanistan surpasses the area of ​​coca plantations in Colombia, Peru and Bolivia, taken together. This year, according to the UN, a record drug harvest is expected in Afghanistan. This is not surprising: after all, 9 / 10 from all opium poppy comes from this country. If three years ago un celebratedthat poppies were grown in 14 in the Afghan regions from 34, then in 2013 their number is already 20. And all this despite the fact that opium poppy cultivation in Afghanistan is prohibited and must be punished by law.

Last year alone, according to the report of the UN Office on Drugs and Crime, on the Afghan fields Was collected 3,7 million tons of opium poppy. And last year, the number of poppy grown somewhat decreased - no, not because of the opposition of the NATO forces, but because of the bad weather and the disease that hit the plants. Afghan villagers significantly expanded poppy planted areas. Compared to 2011, they grew by almost 20% (from 131 thousand hectares to 154 thousand hectares).

Recent attempts by Americans to negotiate with the Taliban in Qatar speak, among other things, of the upcoming division of industrial zones. There is little doubt in Washington who will come to power in Kabul after the ISAF’s withdrawal, and therefore threats prefer negotiations to threats, and commercial deals to antiterrorist rhetoric. Obviously, realizing this, President Karzai declared that the Afghan government would not join the negotiations. For the sake of preserving the image, the US administration canceled talks on June 20 in Doha. The White House, he agreed to a dialogue with terrorists about the future of Afghanistan in the absence of the president of the latter, would have looked even worse than the West, trying to “build” the future of Syria, negotiating with some “Syrian military council”.

Even deadly attacks of terrorists do not interfere with the desire of the Americans to negotiate with the Taliban. As transmits "RT", The Taliban claimed responsibility for a recent attack by the Bagram military camp. As a result of the shelling from an RPG, four American servicemen were killed, and another six were wounded.