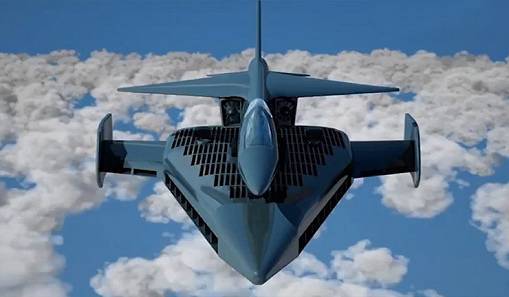 The British defense and aerospace company BAE Systems, the heir to British Aerospace, spoke about its unsuccessful military and civilian developments in the 1960-s.


Among the most interesting, but unsuccessful projects of British designers are the three-step analogue of the Shuttle, jumping armored car, flying platforms for launching aircraft from a height and civilian jet airliners with the possibility of vertical take-off and landing.
BAE Systems has created three-dimensional animation illustrating these projects.

The reusable spacecraft project MUSTARD, created in 1965, turned out to be too advanced for its time. British engineers were going to launch into space three interlinked “flying wings”, two of which, being launch vehicles, returned to Earth after launch, and the third could reach the moon. All three stages could land on specially prepared aerodromes: this is the difference between the development and the Shuttle, which was put into orbit by conventional solid-fuel boosters, which then had to be taken out of the ocean. Only half a century later, similar systems were created for suborbital flights, for example, Virgin Galactic Richard Branson’s SpaceShipTwo.

A leaping armored car at BAE began to develop in the early 1960-s on the order of the British military. It was planned that with the help of 12 vertical takeoff engines, an armored jeep could fly over fairly large obstacles. As a result, the project was closed due to the high cost.

An even more unusual project was the platform for vertical takeoff of the P17D. With the help of 56 jet engines, she could lift cargo or combat aircraft into the air. In fact, using such a platform, the Royal Air Force of Great Britain could get rid of the need for military airfields and launch fighters from forest glades and other small platforms. It was also decided to abandon the project due to its high cost.

Perhaps, one of the most ambitious BAE projects of that time was a jet airliner with the possibility of vertical take-off and landing (VTOL). Such a plane, if it appeared these days, would instantly cause a stir among airlines, but in 1960's, BAE engineers came to the conclusion that the plane would consume too much fuel, and the weight of the lifting engines excessively lowers the center of gravity, making it not sufficiently stable in the air. Apparently, the British engineers with their project wanted to compete with Germany, where in 1960-s they constructed a transport plane with a vertical take-off Dornier Do 31, which also did not go into the series. It was not possible to build passenger and transport aircraft with this concept in the USSR, although interest in this topic does not dry up: in 2004, a resident of the village of Marushkino in the Naro-Fominsky district of the Moscow region Valery Sirotin received a patent for the "Passenger supersonic aircraft with vertical takeoff and landing."

As noted in BAE Systems, developments in the field of VTOL are still used by the corporation, including when working with the F-35 fighter.

Ctrl Enter
Noticed oshЫbku Highlight text and press. Ctrl + Enter
We are
ARMY-2016. Cluster VCS. Part of 2. Space is space!T-72B3 was declassified at the tank biathlon in Alabino
Military Reviewin Yandex News
Military Reviewin Google News
67 comments
Information
Dear reader, to leave comments on the publication, you must to register.