21 2013 June
42
In the past few years, Russian exhibitions began to appear on armored vehicles Tanksequipped with a complex of optoelectronic active protection "Blind-1" in its new configuration. External differences were the first to be noticed: several Shtory-1 modules disappeared from the tower of the updated tanks, which caused corresponding questions. As it soon became clear, the reason for the lack of electronic components was the modernization of the active protection system. During the upgrade of the complex, the composition of its equipment changed, and the characteristics either improved or remained at the same level. 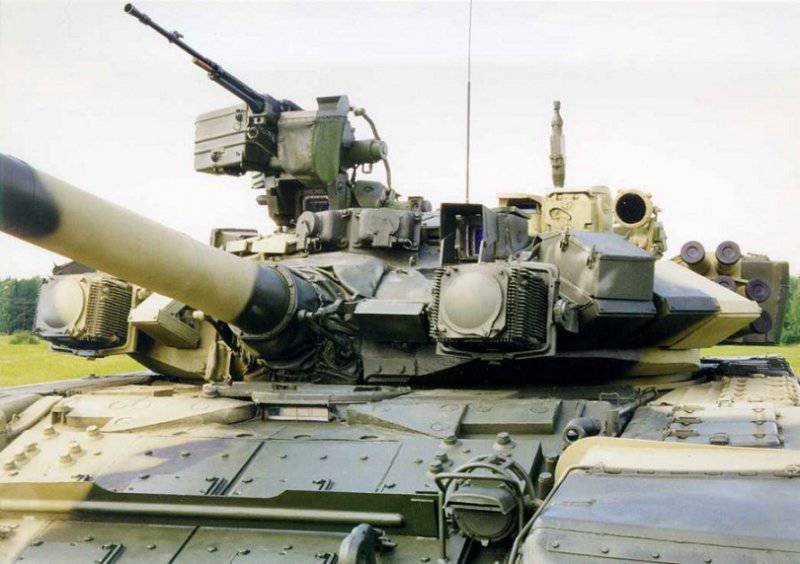 The structure of the latest options "Curtains-1" instead of the station of optical-electronic countermeasures (SOEP) TSHU-1-7, used earlier, includes the station TSHU-1-7М. Under the additional letter in the title hides a large amount of work carried out by the developer of the system - the Special Design Bureau "Zenit" (Zelenograd). The production of the station was planned to begin at Zelenograd Production Association "Plant Stella". The TSHU-1-7М system was created several years ago, but then news only a narrow circle of specialists and persons interested in armored vehicles touched upon it. At the same time at various exhibitions SKB Zenit distributed an advertising booklet with a description of the new counter station. A few days ago, this booklet again "entered into circulation" after the publication in the blog of expert A. Khlopotov.

During the modernization, TSHU-1-7 station has undergone changes only of a technical nature. The principle of operation remains the same: when a laser illumination is detected, the station switches on infrared searchlights, which prevent the anti-tank ammunition from aiming at the tank. In addition, the complex "Blind-1" can hide a tank behind a smoke screen, but similar methods of protection are assigned to its other elements. As part of the updated SOEP, there are still two spotlights placed on the front of the tower. However, the number of other elements of the station compared with TSHU-1-7 significantly reduced.

In addition to two units with spotlights, the base station included two ITS-1-7 modulators (located in armored boxes on the side of the searchlights), two FTSHU-1-7 filters (next to the modulators) and the PTSU-1-7 control panel — only seven elements . After the upgrade, only three blocks remained in the TSEP-1-7М: two RTU-1-7М modules with built-in searchlights and modulators, as well as the PTShU-1-7 control panel. All the necessary equipment was assembled in the existing packages of the remaining modules. This alteration, above all, led to a decrease in station mass. Its three modules weigh a total of 72 kilograms (95,4 kg for SOES TSHU-1-7). In addition, the total length of the necessary cables was reduced four times and the number of connectors on the tank hull eight times. The last aspect of modernization significantly increased the reliability of the station.

The developers of SOEP TSHU-1-7М not only changed the layout of the system elements, but also improved the equipment. Thus, the operating voltage range has expanded from 26-28,5 volts to 18-32 B. In addition, the station availability time has been reduced by 20 times. Now, from switching on the station to switching to the current modulation mode, it takes only three seconds, after which the equipment can operate in combat mode. In the prospectus, it was noted that a significant reduction in readiness time in real combat conditions allows the station to be turned on only after exposure is detected, without unmasking itself with its own radiation from searchlights operating in standby mode.

After modernization, the station of optical-electronic countermeasures retained all the additional functions that were previously available. TSHU-1-7М can still highlight terrain and targets in the infrared range, providing observation of the situation and guidance weapons on purpose. During such work, a special backlight mode allows for about a third to reduce the visibility of the tank itself. According to official information, the upgraded TSHU-1-7М station has a greater efficiency on the 70% in comparison with the base model. The cost of the station at the same time remained the same.

By reducing the weight and reducing the number of blocks, the new station can be installed not only on heavy armored vehicles. In the advertising brochure, a photograph was given of the BMP-3 infantry fighting vehicle, on the tower of which there were two characteristic boxes with infrared searchlights. Also in the promotional materials it was stated that the SESE TSHU-1-7М was tested on several types of equipment: T-72, T-80 and T-90 tanks, as well as BMP-3 tanks. In all cases, as stated, the station showed all its capabilities to protect vehicles from various controlled anti-tank weapons.

An advertising brochure, published several years ago, claimed that the TSU-1-7М optical-electronic counter-station would go into series production in the 2010 year. There are no exact data on this score, as well as information on the number of armored vehicles equipped with the new station. Probably, the full-scale production of new stations did not start due to the termination of purchases of T-90 tanks equipped with the old TSHU-1-7. About the current state of the TSHU-1-7М project, it is only known that these stations are installed on demonstration samples of tanks participating in various exhibitions.

Ctrl Enter
Noticed oshЫbku Highlight text and press. Ctrl + Enter
We are
Armored vehicles of Ukraine: results, potential, prospects ...6-I tank brigade. Technique and training
42 comments
Information
Dear reader, to leave comments on the publication, you must to register.