20 2013 June
3
The rocket of the American portable anti-aircraft complex FIM-92 Stinger was so successful that it was chosen for use on self-propelled SAMs. This is how the AN / TWQ-1 Avenger complexes based on the HMMWV, M6 Linebacker on the M2 Bradley BMP chassis and a number of other interesting systems appeared. Such an approach to the creation of short-range air defense systems was justified and soon became interested in other countries. Among them was China, which began in the late nineties, a similar project called Yitian. 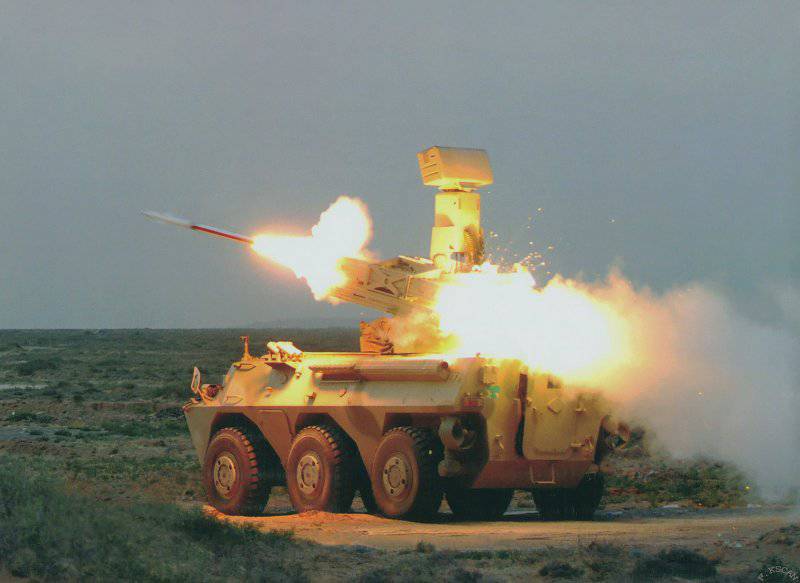 The new Chinese Yitian air defense system, developed by NORINCO, is designed to accompany troops on the march and the defense of stationary objects. In fact, the complex is a combat module with electronic equipment and weapons, which, after minor changes, can be installed on any suitable chassis. Thus, at the international exhibition IDEX-2009, two versions of a self-propelled missile system were demonstrated: based on the 92 Type armored personnel carrier (another designation WZ 551) and on the chassis of the EQ2050 vehicle. In addition, it is known about the existence of a towed version of the launcher, intended for use with other anti-aircraft weapons. For convenience, as an example of a combat vehicle complex Yitian, first consider the option based on an armored personnel carrier.

The six-wheeled combat vehicle is equipped with a horsepower 320 diesel engine, which allows it to accelerate on a highway to a speed of about 80-85 kilometers per hour. If necessary, self-propelled SAMs can swim water obstacles, but its ability to swim is significantly limited by a large and heavy combat module on the roof. Rolled steel armor protects the crew and chassis from rifle bullets weapons and splinters. The combat weight of the vehicle on the basis of an armored personnel carrier “Type 92А” is about 16 tons. For self-defense, it is equipped with one large-caliber machine gun W85 and smoke grenade launchers. During the construction of a self-propelled anti-aircraft complex in the middle part of the roof, on the site of the native tower, a new combat module with equipment and a launcher is installed. 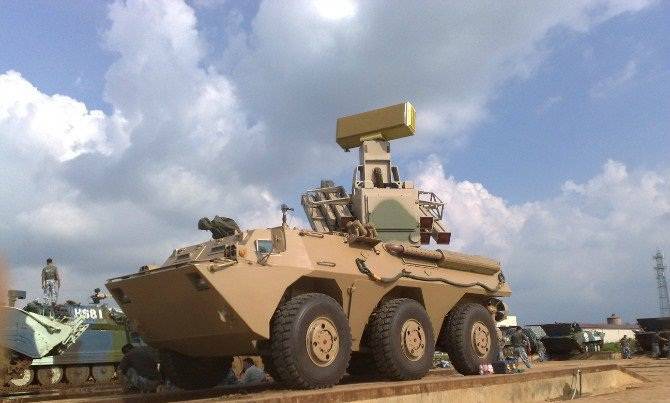 Externally, the combat module is a swivel tower, on the sides of which are launchers with transport and launch containers (TPC) missiles. An optoelectronic unit is located in the middle part of the tower, and a target detection radar antenna is placed on the roof. In the traveling position the antenna is folded. In the inner part of the tower there is only one workplace intended for the operator of the systems. Two other crew members are in front of the hull. Yitian combat vehicle ammunition consists of eight missiles in two blocks of four units. After its consumption, it is necessary to remove empty TPK and install containers with rockets in their place.

NORINCO chose the TY-90 Tian Yan guided missile as an ammunition for the Yitian air defense system. It should be noted that this missile was developed as an air-to-air weapon and was intended for self-defense of helicopters. A missile with an infrared homing head showed its advantages during the tests and the first years of operation in the military aviation China, thanks to which it was able to get to the ground-based anti-aircraft complex.

Rocket TY-90 built on the "duck" and is equipped with a solid fuel engine. Its initial method of application affected the layout: aerodynamic surfaces did not fold, which is why the transport and launch container has a square cross-section with a side about 30 centimeters. The starting weight of the rocket TY-90 - 20 kilogram, three of which fall on the core warhead. It allows you to guaranteed to hit targets at a distance of 4-5 meters. At large distances, the energy of the fragments may be insufficient to cause serious damage to the enemy aircraft. The solid fuel engine accelerates the rocket to a speed of about 2300 km / h, which, in combination with the time of its operation, gives the maximum effective launch range in 5,5-6 kilometers. The maximum height of the lesion is 5,5-6 kilometers. The maximum target speed is 400 meters per second. 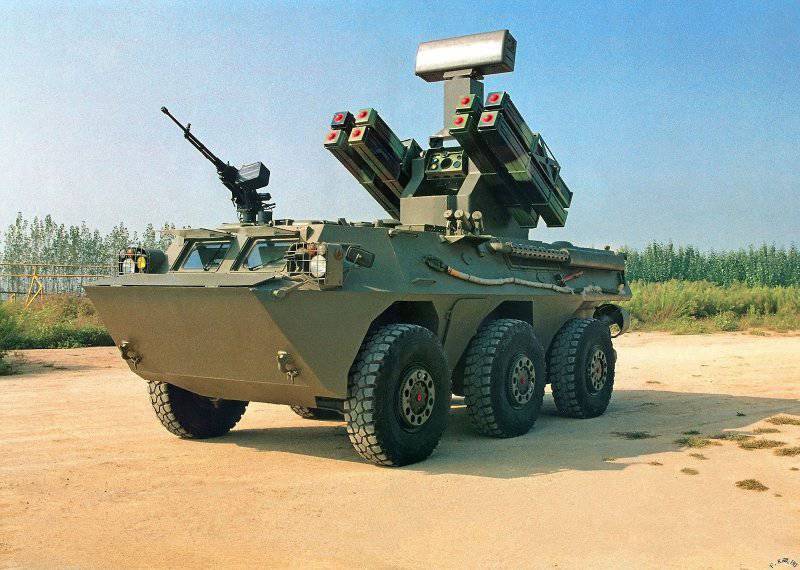 The TY-90 rocket has an infrared homing head with a viewing angle of ± 30 °. The matrix of the head transmits information to a digital computing unit capable of finding a target against the background of the earth and, allegedly, emit radiation of the target in the case of heat traps. There is information about the development and, probably, testing of two new variants of the homing head for TY-90. One of them should work at once in two parts of the spectrum, and the other is supposed to be equipped with a new matrix with the best characteristics. Initially, the missile guidance system allows you to capture the target both before launch and after it. As part of the Yitian air defense missile system, the rocket only works in the first mode.

The combat work of the anti-aircraft missile system is as follows. On the march or on the position, the system operator monitors the air situation with the help of a surveillance radar. A fighter target can be detected at a distance of up to 18 kilometers. For a cruise missile, this parameter is 10-12 kilometers. After finding the target, the operator turns the turret in its direction and prepares for an attack. When the target approaches a distance of about 10-12 kilometers (the exact distance at this stage depends on weather conditions and a number of other factors), the operator takes it for tracking using a thermal or optical sight. After the target enters the shelling zone, a rocket is launched, which is suggested by its own equipment. The stated probability of hitting a target with one missile is 0,8. 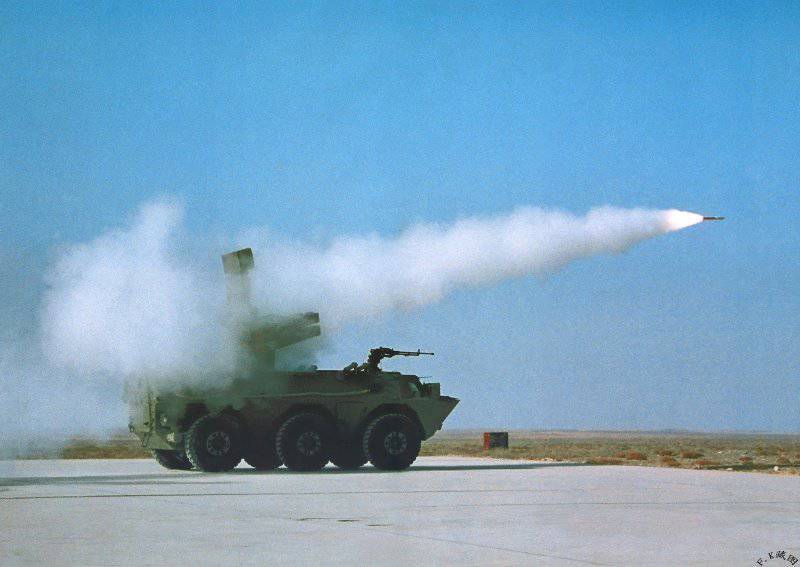 The capabilities of the Yitian SAM system allow it to work both independently and as part of a unit. In the second case, the anti-aircraft battery usually consists of six combat vehicles with missiles and one command post based on the BZ WN 551 with its own radar IBIS-80, capable of simultaneously “seeing” up to 40 targets and accompanying the 12 of them. The command post is equipped with communications equipment designed to transmit data to the operators of combat vehicles. Also as part of the anti-aircraft battery there are several auxiliary machines.

For installation on the car chassis EQ2050 is intended a special version of the combat module. It is facilitated by the absence of the operator’s station and the mechanism for turning and folding the radar antenna. Such a combat module is a pylon on which a rotary unit with a missile defense helicopter, a radar antenna and optical instruments is installed. Such a simplification of the structure had a bad effect on the viewing capabilities. The radar antenna was moved from a separate column to the front side of the rotary unit and placed between blocks of transport-launch containers. Because of this, Yitian in a car chassis cannot constantly monitor the entire surrounding space: this requires turning the entire module along with the missiles. The operator’s workplace in the EQ2050 chassis version is located in the cab, next to the driver. The crew is reduced to two people.

The third version of the Yitian complex is proposed for use as part of the Giant Bow-II air defense system. In this case, the starting equipment and the opto-electronic module are mounted on the towed semi-trailer borrowed from the 87 Type artillery mount (Chinese modernization of the Soviet ZU-23-2). It is noteworthy that in the available images of this version of the air defense missile system missiles are placed on guides, and not attached to the launcher along with TPK. The Giant Bow-II system includes a Yitian towed semi-trailer, Type-87 anti-aircraft guns, an EQ240 truck-based guidance and control station and auxiliary vehicles. The towed version of the Yitian air defense system is intended only for the defense of stationary objects, since its deployment takes a lot of time.

According to reports, none of the three variants of the Yitian anti-aircraft missile system has yet been adopted by the Chinese army. According to some sources, several combat vehicles and towed units are in trial operation, but the complex is not yet the standard armament of any units. The new ZRK is actively advancing on the international market, but so far there is no information about the supply contracts. Perhaps the fate of the Yitian system will be decided in the very near future, but at the moment its prospects are ambiguous.