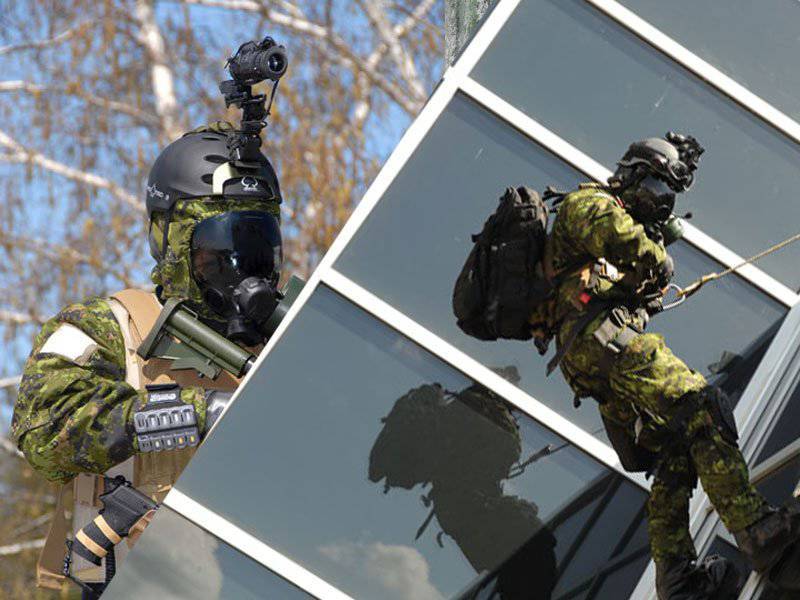 Canada is one of the most influential members of the NATO bloc. Since 1989, the Canadian Forces have been involved in virtually all operations of the North Atlantic bloc. The mission in Afghanistan (2001-2011) was the most visible. Also, Canadian fighters were involved in the NATO grouping in the Balkans. For twelve years, starting on 1992, more than forty thousand Canadian troops have been in Bosnia. The Canadian government has sent about 100 million dollars to finance the NATO operation in Iraq. And the Canadian Air Force took part in an operation against the Libyan regime. Canada is increasingly gaining weight in international politics, including European.

Many analysts are unanimous in their opinion that Canada has gradually become an outpost of NATO in an ever-increasing struggle for the Arctic bowels.

With about 33 million people, the army is 62 thousand troops. A little more than 6 million people are in the mobilization reserve. The military budget is $ 18 million (Canada is in the top ten countries in terms of the military budget). Today, Canada is a country that is steadily and actively building up its military capabilities. A special role is given to strengthening the naval fleet and special forces.

The role of Canadian special forces in the NATO structure is quite large and, most likely, over time, it will only increase. The implementation by the Canadian military department of the new military doctrine of the country leads to a numerical increase in the armed forces and equipping the army with high-quality and modern weapons. The Canadian armed forces face the task of ensuring the protection of vast areas of the country, including areas of the Far North. To this end, much attention is paid not only to building up maritime patrol forces, but also to maintaining in constant combat readiness of the rapid reaction forces, whose task, along with solving combat missions anywhere in the world, is to ensure order inside the country.

Among the units of the Canadian Armed Forces, CANSOFCOM specialists have been called “silent professionals” as recognition of the high level of preparedness of Canadian special forces personnel. The most elite of the CANSOFCOM divisions is the Joint Task Force 2 (JTF2) group, which has to contend with any manifestations of terrorism. The staff of the group 600 people. $ 120 million per year goes to finance this team. On the account of the fighters CANSOFCOM hunt for Serbian snipers in Bosnia, participation in hostilities in Afghanistan, security at the Winter Olympics 2010 of the year. Currently, CANSOFCOM has a well-balanced structure that allows it to perform a wide range of tasks to protect the interests of Canada in the world. The fighters of the Canadian special units are able to quickly adapt in any situations, instantly respond to changes in the situation, and constantly be in a state of high combat readiness. The main tasks of the CANSOFCOM fighters are to conduct, on behalf of the high command of the country, special operations both inside the country and abroad. In addition, CANSOFCOM is given great powers and freedom of action in carrying out operational work to ensure the security of the country. This allows the special forces to apply effective measures to protect the country from any terrorist threat.
Like the special forces of other countries, the special operations forces (MTR) of Canada also have specific tasks:
- preparation and implementation of counter-terrorist operations to prevent terrorist threats;
- conducting combat operations on ships and stationary objects of the marine infrastructure;
- the implementation of special intelligence on the territory of Canada and abroad, the conduct of defensive and offensive operations, the support of diplomatic operations, as well as the evacuation of Canadian citizens from the territory of other states in case of emergency;
- implementation of measures to contain nuclear, biological, radiological and chemical threats.

To perform these functions requires special training of personnel. The selection in CANSOFCOM is very rigorous. Only recruited military personnel are admitted to the group of candidates after two years of impeccable service. CANSOFCOM also has its own reservists, which includes professional soldiers who have served in the army for at least three years.

Candidates for assault units of CANSOFCOM pass additional training and selection. The fighters of the assault detachments are required to work in a team, to carry out combat missions in cold blood in any stressful situation and to be a highly professional specialist in the military specialty. In addition to excellent physical training, fighters of CANSOFCOM must be professionally trained, they must meet high requirements for discipline, psychological stability, decency and maturity. At the initial stages of selection, approximately 80% of candidates are eliminated. Those who pass the test, proceeds to undergo training on the program of the operator special forces. Cadets are required to study the course of the fight against terrorism. This subject of study includes the development of the strategy and tactics of freeing the hostages, the study of methods of penetration into any buildings and modes of transport, combat in a confined space, the ability to deal with assault weapons. To obtain practical skills, special platforms are equipped that simulate various conditions.

An important subject of study is obtaining skills and experience in conducting reconnaissance and sabotage work. Future saboteurs are exploring a multitude of rifle systems. weapons, mine-blasting, get skills parachuteless and parachute landing in difficult conditions. Cadets master mountain and ski training in difficult climatic conditions. Future commandos are practicing coping skills in the forests and mountains of Canada. They receive training in combat operations at high altitude.

Note that the Canadian armed forces do not have submarine saboteurs units, so the CANSOFCOM cadets are learning the course of a combat swimmer. Future Canadian fur seals are trained by instructors from the United States and the British SBS unit.

After completing a full course of study at the CANSOFCOM training base, military personnel become special forces of the assault sector, who are able to perform tasks in a variety of tactical, climatic, and environmental conditions. After completing the training course, they are contracted for 4 of the year.

Very strict selection is carried out in another division of CANSOFCOM - the regiment of special operations. At the first stage, candidates are tested for physical endurance. Then, for several days, the instructors of the training center test the ability of the subjects to work in a team, determine the degree of endurance, reveal the presence of leadership qualities and interpersonal skills. They test cadets for the ability to make decisions under the influence of psychological pressure and tremendous physical exertion. Those who have passed the evaluation stage begin to master the semi-annual basic course. They master various weapon systems, study modern means of communication, receive good medical training, learn how to patrol and possess navigation techniques, various methods of evacuation (by air, land and sea). Junior officers undergo an additional course of command of special forces.

The CANSOFCOM group, designed to eliminate nuclear, chemical and biological threats, is transferred to military personnel with operator experience in taking samples for radiological, chemical, and biological hazards, either as a deactivator or as an operator performing supervisory functions in military units.

Open sources do not have information on the structure and number of soldiers of the CANSOFCOM assault squads. It is assumed that the group consists of 24-32 soldiers under the command of an officer. For military operations, groups are divided into teams of 6-8 fighters (the full group is rarely used). Each team has its own specialization and training: mountain, parachuting, diving, etc. The special operations regiment consists of three main companies and a support unit. Given the cases of terrorist attacks from the air, CANSOFCOM includes aviation squadron. The main objective of this squadron is to help groups in combat missions. The aviation division takes part in emergency situations, as well as in search and rescue operations conducted by CANSOFCOM. Recently, the CANSOFCOM team has been replenished with a new division for resolving incidents related to the occurrence of radiation, nuclear, biological and chemical threats.

As shown by the events of recent years, in local military conflicts, for example, in Yugoslavia. Libya, Syria, Iraq, special forces became the main forward combat units that were able to act autonomously, efficiently and effectively in all situations. Therefore, without exaggeration, it can be argued that MTRs are a new way of conducting combat operations.

Recall that in March 2013 of the year by order of the Minister of Defense of the Russian Federation S. Shoigu, Russia also began to form special operations forces that were behind the USA by 26 years in this decision. The US does not hide its plans to significantly increase the number of secret operations abroad by the SSO. The Russian military department, having studied the practice of using special operations forces of the leading military powers of the world, came to the decision to create its own SSO.

April 29 of this year in the mountains of Kabardino-Balkaria, the first special tactical exercises of the special operations forces of the Russian Federation took place. The base of the Russian SSO was the village of Kubinka-2 near Moscow. The Special Purpose Center is subordinate to the already established MTR Command of the Ministry of Defense of Russia. 500 servicemen will serve in the new special unit. The center has already received sufficient funding. The structure of the Russian MTR, in addition to the special forces of the Ministry of Defense, will include special units of the Ministry of Internal Affairs, FSIN, FKSN, FSB, FSO. Special operations forces are entitled to conduct combat operations not only in Russia, but also abroad. General management of all special forces units will be transferred to the command of the SSO, if necessary.

The experience of creating special operations forces of such countries as the USA and Canada will be useful for the Russian command to form, equip, train their own SSO, which, in essence, are a unique, effective weapon with which Russia can solve a huge number of issues and problems related ensuring the country's security and upholding Russia's interests at the international level.

Ctrl Enter
Noticed oshЫbku Highlight text and press. Ctrl + Enter
We are
Royal Malaysian Special ForcesSome examples of actions by US and British Special Forces in the 90s of the 20th century
Military Reviewin Yandex News
Military Reviewin Google News
21 comment
Information
Dear reader, to leave comments on the publication, you must sign in.