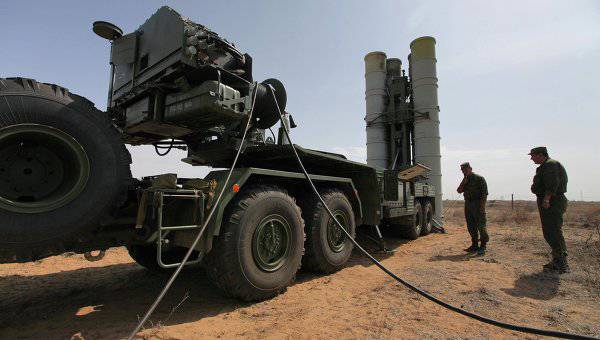 Anti-aircraft missile system C-300. Photos from the official website of the Ministry of Defense of the Russian Federation

Possible deliveries to Syria of Russian ZRS C-300P have already managed to acquire a mass of myths. As, however, and this very SAM, which has never participated in any war.

Regarding the “three hundred”, it must be recalled that in the 70s this air defense system was created as an integral part of the USSR’s most powerful air defense system. It was supposed to be located mainly in the interior of the country, where there was no danger of an attack from the ground, it was "supported" by short-range and medium-range air defense systems "from below", and fighter was "above" aviation. In addition, the S-300P regiments themselves should have been many. If the air defense system is “taken out of context” and placed in conditions for which it was not created, its flaws begin to appear.

The first is cumbersome. Even in the minimum configuration, one C-300P division consists of about a dozen 12-meter 4-axle trucks weighing more than 40 tons. Moreover, one division is not a full-fledged combat unit.

The second drawback is the presence of a large "dead funnel" around each PU, within which the target cannot be hit.

The third drawback is a very low rate of reloading PU, at least one hour. Moreover, even this value is purely theoretical, for its implementation it is necessary to have a TZM for each launcher and a spare ammunition for the position of the division. As a rule, there is neither one nor the other; therefore, the ZRS is in a sense “disposable.”

From these shortcomings it follows that the air defense system is extremely vulnerable to attacks from the ground, and from the time of deployment - from the air. But even after deployment, each division, as well as the regiment's command post, must be covered with low-altitude air defense systems, MANPADS, ZRPK / ZSU. In addition, the regiment, consisting of one or two divisions, in reality is not capable due to the very rapid depletion of ammunition. In addition, there should be more than one division in order for them to overlap each other’s “dead craters”. Finally, the ZRS is very difficult to transport. In particular, air transfer is almost impossible. Theoretically, you can push one or two cars in An-124, but it is very expensive and time consuming. By sea too long, but at least cheaper. As mentioned above, the system is extremely vulnerable at the stages of transportation, unloading and a march to the place of deployment.

On all of this, to put it mildly, it will not be easy to deliver "three hundred" to Syria "secretly." Most likely, for its delivery, it will be necessary to conduct a serious military operation with the participation of naval warships, including cruisers (to provide air defense at least for the port of discharge). At the same time, in a country whose entire territory is engulfed in civil war, C-300П will be under constant threat of an attack from the ground by opposition fighters or disguised as opposition fighters by the opposition and after deployment. Therefore, the system will require a very strong permanent cover from the ground.

With regard to attacks from the air, if the air defense missile system can be deployed, it is intended to reflect them. The problem of staff training is now omitted (it is possible that this staff will not consist of Syrians). Impact on different potential opponents will also be different.

As it is known, during the operation in Libya in 2011, the European Air Force took turns in "quitting the game" due to the complete exhaustion of their ammunition and fuel limits. Although the forces of Gaddafi did not have air defense at all. Syria has many old C-75, C-125, C-200, Square, Wasp and some new Buk and Pantsira. And this almost completely discourages the desire to repeat the Libyan version. The appearance of C-300P in Syria will exclude the possibility of Europeans interfering completely and irrevocably.

Israelis will be furious because their air force will face a really serious problem for the first time in 40. And despite the fact that they did not have pilots with real combat experience (attacks against unresponsive Palestinians and Hezbollah do not count). For the destruction of the "300" it will be necessary to conduct a very serious operation involving a significant part of the Israeli Air Force. At the same time, there will be a very high probability of loss and, accordingly, the capture of pilots in Syrian captivity, which will become another serious problem for the Jewish state.

At the same time, it is necessary to emphasize that the thesis, popular in Israel, about the danger of “three hundred” falling into the hands of terrorists is the embodiment of absurdity. Having captured C-300P, the terrorists can only blow it up on the spot, since they will not be able to carry out its maintenance and combat use, for which they obviously do not have enough qualifications (besides, maintenance is impossible without the participation of the manufacturer, that is, Russia). In addition, terrorists always seek secrecy of their actions. The S-300P ZRS is completely impossible to hide, since, as mentioned above, it consists of many huge machines. In addition, in combat conditions ZRS unmasks itself and on the air thanks to several powerful locators.

Only Americans can guaranteed to destroy C-300P without loss in aircraft and pilots: just crush it with Tomahawks. In this case, any cruise missile (with the exception of a stray) will perform the task - either destroy some element of the "300", or distract the 1-2 missiles to itself, which will contribute to depleting the ammunition. For which, as mentioned above, there is an almost insoluble recharge problem. In the end, the Americans have more “Tomahawks” than the Syrians will get their missiles, so sooner or later they will knock out the “three hundred” in such a simple way. True, it will take several hundred missiles (and their number in the American arsenals is by no means infinite and is apparently only 3 – 4 thousand) and the corresponding amount of millions of dollars will the relations with Moscow be catastrophically spoiled to return the defense of Syria to the state in which it is now. Israel, as shown above, will pay an even higher price to achieve the same result.

In general, of course, the presence of C-300P will significantly increase the sustainability of Syria’s air defense against NATO aggression, but the likelihood of such aggression is still very low. As for Israel, the likelihood of an attack on its part will probably even increase.

Written at all does not mean that Russia should not supply "three hundred" to Syria. At a minimum, a signed contract must be executed, especially since there is not the slightest reason not to carry it out. But it is necessary to set priorities correctly, that is, not to dwell on the threat, the probability of its realization is low, but concentrate on the threat that is being implemented today. MiG-29M, C-300, Buk and Bastion are good, but the Syrians also need the Kalashnikovs, RPG-7, T-72, D-30, BM-21, Mi-24, as well as ammunition to all this. Russia has infinitely many in the warehouses of this good, so it can be supplied free of charge (all the same, it is doomed to an early disposal). And the more pointless to dispose of ammunition by detonation (and sometimes at the cost of soldiers' lives), it is better to give them to Assad, so that his army can utilize them in battle.

ON THE FRONT LEVEL OF STRUGGLE AGAINST WAHHABISM

At the beginning of the Syrian conflict, the supply of such weapons intended for civil war, seemed morally questionable (at that time it sometimes seemed that the people rebelled against the dictator). Today, such doubts have disappeared. Not even because “revolutionary” Libya, Turkey and the Arab monarchies do not limit themselves in supplying weapons to the opposition, thereby, by the way, completely excluding the possibility of a peaceful solution (the Arabs and Turks pay for the opposition to fight before the victory). And not because a very large part of the Syrian people supports Assad, otherwise he would not have been not only in Damascus, but generally in the world. The fact is that the rapid internationalization and radicalization (more precisely, Wahhabisation) of the opposition makes the Syrian war our war. The World Wahhabi International is our most dangerous enemy, so anyone who fights against him is our natural ally.

The Americans have been such an ally to us for a very long time, no matter how blasphemous this may sound to our “patriotic public”. In Afghanistan and Iraq, they inflicted heavy losses on the Islamic radicals. Thanks to these two wars, Wahhabi pressure on Russia, especially on the Caucasus, has noticeably decreased. But now it is in the past. The Americans left Iraq a year and a half ago, they will leave Afghanistan in a year, but now they are quickly closing the operation. Now, Assad was at the forefront of the struggle. The more his fighters kill the Wahhabis, the better and calmer we will be. It is necessary to give the Syrian army everything that is required to solve this task, which is crucial for the security of Russia. It’s not a fact that opposition militants actually write on the walls in Russian “Today Syria - Russia Tomorrow”, but it’s a fact that it will be so in reality.

The position of the West in this matter is becoming increasingly indecent. Having received zero benefit and a lot of problems from the “Arab spring”, he continues to pronounce mantras about “a bloody dictator fighting against his own people.” If the dictator actually shoots his own people, he will not last a week, as was the case in Romania in December 1989. There, by the way, the draft army fully supported the people and quickly demolished the dictator. In Syria, the army is also fully recruiting, up to 80% it remains loyal to Assad. However, the strongest ideological narrow-mindedness does not allow the West to face the facts. Even more absurd is the behavior of Israel, for which Assad is obviously a much smaller evil than the opposition. Here, apparently, instincts are already operating.

However, this is the problem of the West and Israel, and not ours. The West has no real levers of pressure on Moscow, its anti-Assad and anti-Russian tantrums are evidence of weakness, not strength. The propaganda campaigns are designed to suppress the enemy’s will to resist, while concealing the inability of the West to use force in practice. From our oil and gas, he will not give up. It’s simply absurd to talk about force pressure. If NATO does not run the risk of war with Syria torn apart by civil war, what threat could it pose to us? On the contrary, the West is increasingly afraid of us, which, unfortunately, is completely misunderstood in Russia. True, there is such a specific way of putting pressure on our high-ranking officials as blackmail on the existence of accounts and real estate in this very West. But there are no comments.

Thus, strengthening the air defense and coastal defenses of Syria is, of course, useful as a “safety net” against Western-Turkish-Arab intervention. But much more important now is the means of ground war.

Moreover, they also become an additional "safety net". The main thing is that the Wahhabi killed at Homs will never come to Nalchik or Ufa.

Ctrl Enter
Noticed oshЫbku Highlight text and press. Ctrl + Enter
We are
Russian air defense covers only half the countryWhat you didn't want to know about England
Military Reviewin Yandex News
Military Reviewin Google News
156 comments
Information
Dear reader, to leave comments on the publication, you must sign in.