19 2013 June
22
Recently, articles on hand guns weapons we go around revolvers. On the one hand, this weapon is quite simple, and only the lazy will not understand how it works. On the other hand, among the revolvers there are interesting samples that gave certain technical solutions already for other models, later ones. Of course, now a revolver is more likely a weapon of the past, revolvers are not used in the army, and even if they are present in the police environment, it’s rather a tribute stories. Nevertheless, the revolver was and remains one of the most unpretentious, reliable and safe samples, although it has many drawbacks, otherwise the pistols would not have acquired such a distribution. In my opinion, the revolver at the moment is an excellent self-defense weapon, which almost completely excludes the possibility of an accidental shot, but this article will not discuss this. 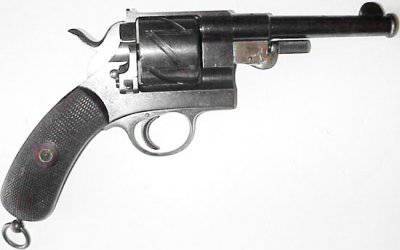 Paradoxically, many people who seek to expand their knowledge of handguns do not pay attention to revolvers. So, for example, not everyone knows about zigzag revolvers, but once this method of turning a revolver drum, patented by one of the Mauser brothers, literally turned the world of short-barreled weapons, leaving behind frequent misfires and unreliable recorded drums during a shot . It is with this system of rotation of the drum, as well as with a pair of revolvers, issued by the Mauser brothers, we will get acquainted in this article.

The main reason for creating a new principle of revolver drum rotation was that rigid revolving of the drum was not provided for in revolvers of that time. As a result of this, frequent misfires arose not only because of poor-quality ammunition, but also because the drummer simply did not hit the primer. Naturally, this phenomenon was not so frequent, but it was, and who needs a weapon that gives even one percent of misfires? The Mauser brothers developed their original drum turning system, completely different from the conventional gear. 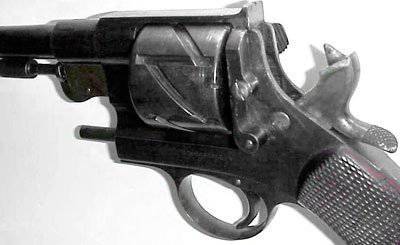 The main idea was the introduction of an additional element in the mechanism of the weapon, which slid along the slots on the outer surface of the drum, forcing not only it to rotate, but also to be fixed securely at the moment of the shot. These slots were zagzagoobraznye, hence the name of all such revolvers. The straight groove passed exactly opposite the drum chamber, and the oblique groove connected straight lines. As a result, while the trigger was being pulled, the trigger was cocked and the slider moved along an oblique slit forcing the drum to spin. When the trigger was released, the slider was already moving in a straight slot, so that with the next press, go to the oblique and turn the drum again. In general, everything turned out to be ingeniously simple.

However, this system had its drawbacks, which immediately showed themselves. Among the minor ones, an increase in the weight of the weapon can be noted, due to the fact that it was impossible to make a weight of the groove between the chambers on the drum that would facilitate its weight. More serious shortcomings have become the complication of the production of weapons, as well as increased sensitivity to contamination of the grooves on the drum. If when pressing the trigger the contaminated groove meant only that more effort had to be applied, then the contaminated direct groove, along which the slider moved when the trigger was released, meant the failure of the weapon, since the only force that moved the slider forward was not tight springs. However, the production technologies developed, and there were few people willing to throw weapons into the ground so that the grooved dirt appeared in the grooves, so in any case this weapon was a more acceptable option compared to other revolvers, especially for those shooters who used their weapons on the go or gallop. 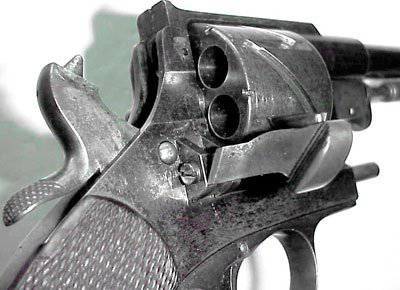 The first revolver, made with such an original drum rotation system, turned out to be not the most successful, or rather the revolver itself was quite good, but it did not catch on to the market due to a number of minor reasons, but more on that below. The name of this weapon was Mauser M1878 ZigZag No.1, it is clear that the number was added after the weapon had a more successful development. In addition to the system of rotation of the drum of weapons, this revolver was a model corresponding to all the modern trends of weapon fashion of the time and was developed under the cartridge caliber 9 millimeters. The length of the weapon was 270 millimeters, with a barrel length 136 millimeters, and the weight was equal to 0,75 kilograms, which, in my opinion, not so much.

The trigger, trigger, sights, it was all common in this model of weapon and did not even stand out with its shape, but there was another interesting enough control element, namely the fuse, which actually represented the usual retainer of the drum. Since the drum was rotated when the trigger was pressed, after the shot in front of the trigger, the cartridge case remained, that is, it was necessary to fix the system in such a position that a second shot was not possible. Since all the elements were interconnected, only one of them could be fixed so that others did not move. Thus, the fixation of the drum led to the fact that it was impossible to cock the gun or pull the trigger. 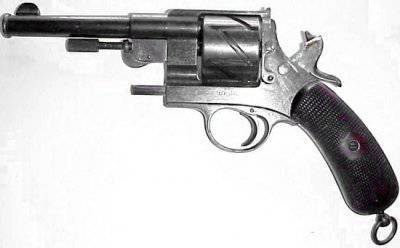 Despite the fact that the cartridge used in the revolver is not the most powerful, the frame of the weapon is whole. This feature significantly added the strength of the weapon, and therefore increased its resource, however, despite this, this feature was taken as a disadvantage. The fact is that at the time of the creation of a weapon, a “mod” for revolvers with a turning frame appeared, and although such a construction significantly reduces the revolver's resource and limits the power of ammunition that can be used in it, at that time such revolvers were popular. It is undeniable that such a design allows for accelerated reloading of weapons, but it is very debatable which is more important. Thus, one of the main drawbacks of the Mauser M1878 revolver number 1 is that the reloading is carried out on one cartridge, through the window on the right side of the weapon, well, at least at that moment it was considered a disadvantage.

In other words, the new trends in weapon fashion, price, and so on were those factors due to which the weapon did not spread. A total of about a hundred revolvers were released, especially those who owed their duty to use weapons at a gallop appreciated them, as reliable drum fixing excluded misfires when firing, of course, when using high-quality ammunition. 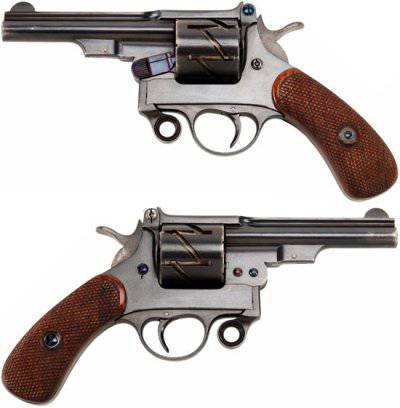 Despite the fact that the first revolver with the system of rotation of the drum due to the zigzag grooves did not receive special distribution, many manufacturers considered this solution not only interesting, but also quite viable. Even the fact that you had to pay for using this drum rotation system did not stop anyone. The Mauser brothers did not fall behind either.
Literally immediately after the first revolver, the second option was created, this time with a turning up frame. This weapon went to the masses under the name Mauser M1878 No.2, although there were a lot of differences from the previous revolver. First of all, it should be noted that this revolver was produced at once in three calibers, respectively, the weapon differed in its length and weight. So for the 7,6 millimeter caliber the barrel length was 94 millimeters, for the 9 millimeter caliber the length was equal to 136 millimeters, with the ammunition 10,6 caliber of millimeters 143 millimeter. The total length is respectively 145, 270 and 280 millimeters. Weight in the same sequence 0,56, 0,75 and 0,86 kilogram.

Fixing the frame of the weapon was carried out using a sufficiently large latch, which securely fixed the frame of the revolver in the closed position, due to the fact that it entered the frame in an arc, and not in a straight line. Another interesting point was that the weapon had a central extractor, which threw all the cartridges out of the drum while opening. True, unused bullets were thrown out along with the spent cartridges. This was the main advantage of the second model over the first one, especially since it is impossible to turn the drum for the same recharging without pressing the trigger. 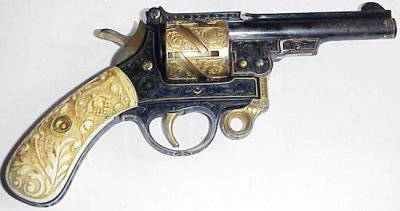 Unfortunately, this weapon did not spread because of its complexity and high cost, the army refused it, and cheaper and practical models of weapons were on the civilian market. In an attempt to squeeze the maximum out of this revolver, variants with expensive finishes and even around 20 carbines were created, which differed only in the presence of the butt and barrel length, but did not produce any results. As a result, after about 5 thousands of weapons were released, production was curtailed.

Despite the fact that the revolvers of the Mauser brothers were not a success, the very idea turned out to be in demand and was applied in many other models of revolvers, including other manufacturers.