13 June 2013 of the year in the Central Academic Theater of the Russian Army took place the next, 13-th, in a row, award ceremony for the best Russian doctors called “Vocation”. This ceremony was conducted by the People’s Artist of Russia Alexander Rosenbaum and the famous TV presenter Elena Malysheva. At the ceremony in the nomination "Military Doctors. Special award to doctors assisting victims of wars, terrorist acts and natural disasters. ”The award went to a group of military doctors of the RF Ministry of Defense, who during the counter-terrorist operation 1994-1995 in Chechnya provided the necessary medical assistance to the injured and wounded.

The award to military doctors was personally handed over by Russian Defense Minister General of the Army Sergey Shoigu. In his welcoming speech, Shoigu noted the importance of the work of military doctors, and also expressed to them the words of appreciation and gratitude for their dedicated work not only during the conduct of hostilities, but also in peaceful, everyday life. On the stage, the nominees were thanked by Russian officers Alexei Buzdygar and Sergey Muzyakov, who in 1995 themselves passed through the caring hands of the awarded military medics. 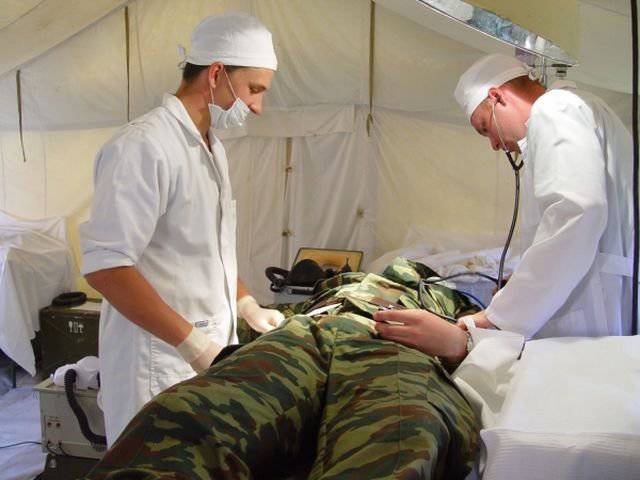 A group of military doctors as part of the hospital chief Oleg Popov, as well as surgeons Alexander Drakin, Mikhail Lysenko, therapist Alexander Kudryashov as part of the 696 special medical unit in December 1994 had to deploy their military field hospital in the area of ​​the city of Mozdok. In those days, military medics worked on 16-18 hours a day, operations went on one after another without interruption. Every day, the personnel of the field hospital prepared hundreds of wounded Russian soldiers and officers for evacuation and shipment to the “mainland”. For all the time of conducting military operations in the Caucasus, military doctors saved thousands of lives of Russian servicemen.

The fate of Dr. Oleg Popov and his colleagues is largely indicative and serves as an example of heroism and dedication, devotion to duty. Oleg Aleksandrovich Popov went through the entire first war in Chechnya, which is called “from bell to bell”, being appointed commander of the 1993 medical unit for special purposes in 696. It was the forces of the doctors of this detachment in Mozdok that promptly deployed a hospital, where almost every third serviceman wounded in Chechnya could receive timely treatment. For his excellent service in the North Caucasus, Oleg Alexandrovich was awarded the Order of Military Merit. But these are not his only military awards, the military doctor received previous 4 military orders, providing medical assistance to Soviet soldiers and officers during the Afghan war.

In March, 1996, Oleg Popov was dismissed from the Armed Forces: the severe contusion he received during the Afghan campaign worsened in Chechnya, and his health condition no longer allowed him to perform the duties of a military physician in the same rhythm. After being dismissed from the Russian army, Oleg Popov was the only medical officer in the Armed Forces who was awarded 5 military orders - 11 was a simple military retiree for years. However, in 2007, Popov was invited to his current position. Oleg Popov became the general director of the interregional public organization "Association of Veterans of the Military Medical Service of Russia". Since then, veterans of the Russian medical service have been under his direct, personal care. He tries to do everything possible and impossible in order to provide his colleagues with the necessary social, medical, and sometimes material assistance. 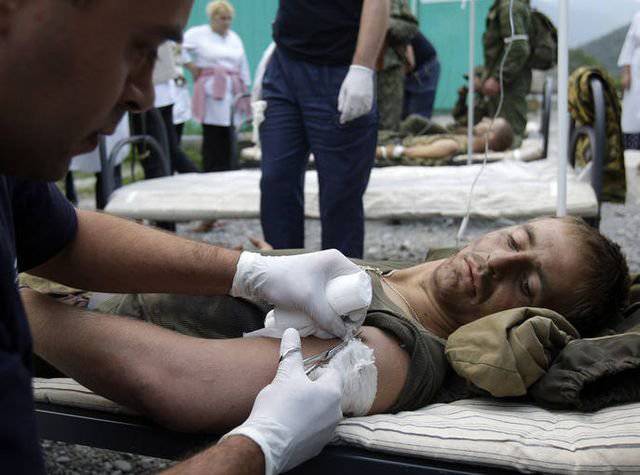 If we talk about the Chechen campaigns, then there are quite a few soldiers and officers who will remember the Russian military medics with a kind word. This includes Captain Alexander Krasko, who was “killed” 3 times in the Caucasus. Two times it was a sniper in the first Chechen campaign. For the third time, already a colonel, he was blown up by militants on the road to Urus-Martan. He still can not forget his very first wound. Then the sniper's bullet entered his neck and threw it over the curb. This border and saved his life, the sniper could not finish him off. Later, a medic was pulling him across the street from their battalion. During the rescue of the wounded, he himself was seriously wounded, but was able to drag Krasko to MTLB. In only a few minutes 15 the officer had already operated on Khankala.

After that, Alexander Krasno had been treated in military hospitals for quite a long time. He returned to service only a year later, and in August 1996, in Grozny, he again received a bullet. This time, under heavy fire, the officer was evacuated by helicopter. The medical pinwheel received 37 various holes. But the military pilots and the accompanying wounded military doctors were able to deliver the 5's seriously wounded servicemen to the military hospital on time. Since then, officer Alexander Krasko celebrates his birthday 4 once a year. And always raises a glass and says a toast to the doctors in uniform. And there are dozens, if not hundreds, of such stories, as with Colonel Alexander Krasko, in Russian military medicine.

It hurt many to look at what was happening with the Russian military medicine in recent years. Recently, the new Minister of Defense of Russia, Sergei Shoigu, noted that military hospitals are no longer going to close, according to him, the Russian Defense Ministry has its own “road map” on this issue. “We do not plan to close anything else,” said the general, who visited the State Flight Test Center. Chkalov, located in Akhtubinsk. In this case, Shoigu later clarified that part of the military hospitals will be transferred to the jurisdiction of the Federal Medical and Biological Agency (FMBA). In particular, we are talking about those military camps and garrisons in which there are few military personnel and it makes no sense to maintain a large number of medical workers there. 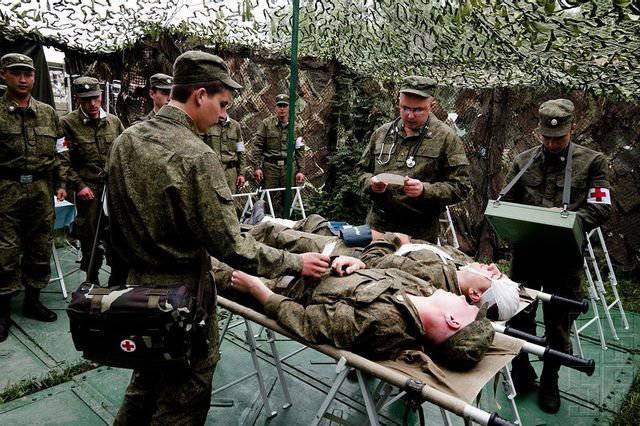 “Still, in many places we have clinics that seem to be good, and the equipment is excellent, but with specialists it’s worse. Therefore, we will prepare new medical personnel at the Military Medical Academy in St. Petersburg and send them, among other things, to Akhtubinsk, ”said Sergey Shoigu. Recall that to pass the military hospital FMBA head of the Ministry of Defense decided at the end of 2012 year. Then it was reported that all the transferred medical institutions will receive the status of “civilian”, and not only military personnel and their families, but also local residents will be able to go there for medical assistance.

The massive disbandment of military hospitals began on the initiative of former Defense Minister Anatoly Serdyukov as early as 2008 in the framework of the reform of the Russian system of military medicine. Already by 2009, the 22 hospital and several dozen clinics were disbanded in the country, and the number of military doctors decreased from 15 000 to 5 800 people.

The level of medical care and its effectiveness in military hospitals in Russia and the USSR have been high since these institutions only began to appear in our cities. The quality of medical specialists rendered here was not questioned either during the times of the Russian Empire or in the times of the USSR. It would seem if the industry possesses a glorious history and brings obvious benefits to citizens, it must be supported and developed with all its might. But in reality everything is different. Experts do not get tired to say that in our days military medicine is not in its best condition. As a result of the reform that has been carried out in recent years, a clear continuity has been broken from building a scientific, clinical, rehabilitation complex to getting an exit after going through this whole medical chain of a healthy citizen. And this is only a small part of the problems that military physicians face almost every day.

One of the main problems is the poor state of the material base of hospitals and hospitals. Many of them were built in the last century, and their wear ranges from 80% to 100%. It is clear that for their recovery requires substantial cash. According to Sergey Shoigu, today 72% of buildings have been in use for more than 40 years, most of them need renovation and major repairs, in addition there is an urgent need for new premises. Not only dilapidated buildings, but also the quality of services provided today leaves much to be desired, the Minister of Defense emphasized. The poor equipment of medical units with specialized equipment is alarming. This is quite a serious matter, since the absence of the necessary equipment means that it is impossible to provide high-quality medical care in the field. 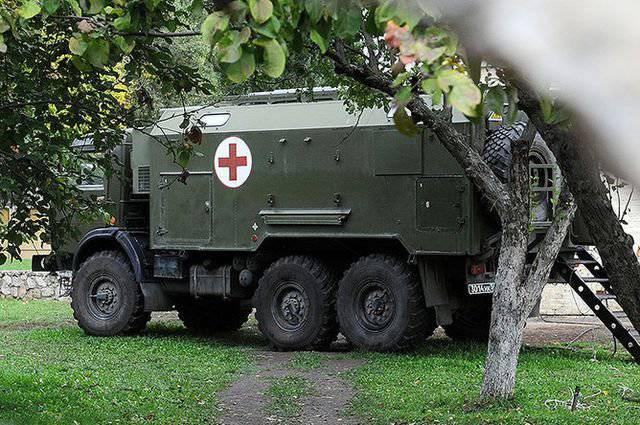 There are problems with the provision of medicines. The need of military medicine for drug supply in the past year amounted to 10 billion rubles. But it was allocated only 40% of the required amount. The lack of sufficient funds in the budget for this article, of course, did nothing to improve the situation. A similar situation is observed in financing the construction of new medical institutions. At present, the percentage of security in construction and overhaul is no more than 30 – 40%. Hence, the long-term chronic unfinished, and the depreciation of the material base. Some medical facilities are not being commissioned for more than 10 years, which does not allow for full medical care.

As is known, approximately 17 regions of Russia are completely deprived of medical institutions of the Ministry of Defense. This has led to the fact that approximately 400 thousands of military personnel, as well as military retirees, are now forced to seek medical assistance in the already overwhelmed civilian medical institutions. If in a number of regions of Central Russia military retirees, theoretically, without any problems, can afford to apply for medical assistance to civilian hospitals and clinics, then there are quite a few corners of Russia, where from a place of residence to a settlement with a suitable hospital you have to travel at least several hundred kilometers .

But the situation will still get better. Defense Minister Sergei Shoigu ordered to allocate 1,4 billion rubles for the purchase of new medical equipment, as well as retrofitting military hospitals with graduates of medical universities. In addition, the issue of commissioning hospital ships should be resolved and a detailed analysis of the need and feasibility of reducing the number of military medical facilities in a number of Russian regions should be made. All this can not but rejoice.

Ctrl Enter
Noticed oshЫbku Highlight text and press. Ctrl + Enter
We are
The award system of the Soviet ArmyAnton Denikin - the fate of the officer on the altar of history
Military Reviewin Yandex News
Military Reviewin Google News
10 comments
Information
Dear reader, to leave comments on the publication, you must to register.