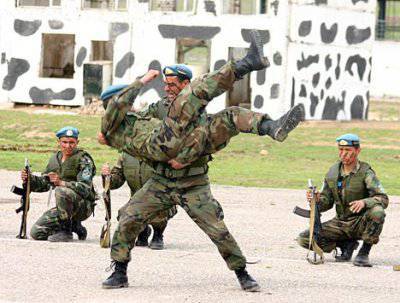 It is recognized that the armed forces of Tajikistan were formed in February 1993, at a time when the country was experiencing an extremely complex military and political situation. When the civil war ended, killing more than 150 thousands of people, the army faced a serious shortage of military personnel, an almost complete lack of material and technical base. This, of course, could not but affect the combat readiness of the troops. It should be noted that the armed forces of Tajikistan are the only army that has received almost nothing after the collapse of the Soviet Union. However, this did not prevent it from becoming one of the most efficient structures in Central Asia over time. And the whole point is that the basis of the Tajik armed forces were separate combat units, which previously consisted of the formations of the Popular Front. Analysis of the military operations and repeated participation in joint military exercises showed that the distinctive feature of the army of Tajikistan is good preparedness and ability to conduct military operations in mountainous conditions, with limited visibility and limited maneuvering capability.


The Tajik armed forces, in addition to the usual units, there are special forces units that are recognized as the most experienced and prepared among the formations similar in their occupation in all of Central Asia. This is due to the extensive experience acquired during the civil war that raged in the country in the 1992-1997 years. The first unit that appeared on the territory of Tajikistan was the special purpose company of the National Security Committee, which was established in 1991. Later it was reformed into a battalion. However, it should be noted that the goals and objectives that this unit should perform were not clearly spelled out. An armed conflict began in the country, so the formation of the battalion was more practical than theoretical. In 1997, this battalion was transformed into the 7-th separate air assault brigade. Practically from the first day of its existence, this unit became one of the most combat-ready, taking part in most of the clashes. Approximately half of the officers of the brigade, including its commander, can be said to have passed the courage test during the civil war. So, in particular, the unit came out in Khujand against Colonel Khudoiberdiev and his militants, who numbered about four hundred people. Despite the unfavorable position and four-day continuous battles, the special forces nevertheless managed to free the hostages and stop the insurgency. During the fighting, four units of the unit were killed, another 33 were seriously injured. The operation in Khujand demonstrated that the level of preparation of the compound fully meets the requirements and complexity of the tasks that were set for it.

Each year, the fighters of the assault brigade take part in military exercises to demonstrate their skills. One of such demonstration exercises are those that are held in the field training center located a couple of kilometers from Dushanbe. As a rule, the exercise scenario consists of several parts. The fighters overcome the obstacle course, demonstrating the methods and techniques of using weapons, equipment and special means when freeing hostages captured by terrorists, repelling an attack by militants and their subsequent destruction.

As a rule, the release of hostages is carried out with the use of helicopters, with the help of which not only reconnaissance or reconnaissance is carried out, but also the landing of a group of capture into the windows or on the roof of a multi-storey building, captured by terrorists. Mi-24 appear periodically in the air. In this case, the paratroopers have a good cover from the ground - armored vehicles.

When airborne forces are detected and eliminated, the airborne forces act not only from the ground, but also from the air: after the armored vehicles perform their part of the mission, An-2 appears in the sky, from which airborne troops land in the rear of the enemy, completing liquidation of the enemy.

In addition, as part of training fights, brigade fighters demonstrate various techniques and combinations of hand-to-hand combat. It is worth noting that not only men demonstrate their skills, but also women who also serve in the unit. Fighters act cleverly, consistently, skillfully treated with weapons: they make various tricks with nunchucks and knives, repel the attacks of the enemy, armed with piercing and cutting objects, carry out grabs and throws, and painful tricks. Moreover, such teachings are not complete without the traditional “special forces window dressing” - breaking a burning or solid surface.

As noted above, women serve in the brigade on a par with men. There are about twenty of them. The average age of women serving in the brigade is 20-30 years, and among the positions they occupy, in addition to the traditional ones - telecommunications workers and physicians, it should be noted purely male - snipers, shooters and sappers.

To get to the service in the assault brigade is not easy. After all, the recruitment takes into account a large number of factors: excellent physical shape and mental stability, literacy, motivation for the service, and for those who claim to be telecom operators and medical instructors - and possession of a specialized profession.

Thus, not only the leadership of the Ministry of Defense of Tajikistan, but the government as a whole is proud of the fact that there are fighters in their state who are not only able to wear blue berets, but also fully comply with the highest requirements that are set for paratroopers from Soviet times.