Deputies found a solution to the issues of uncontrolled migration? 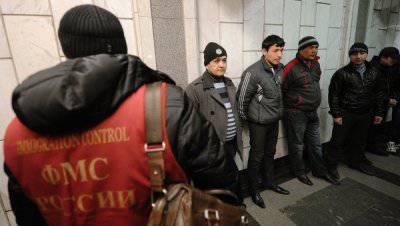 According to the latest data submitted by State Duma deputies, in 2012, 15,88 million foreign nationals entered Russia from various foreign countries (primarily from the near abroad), of which only 1,34 million received official work permits. The same lawmakers declare that the real number of foreign citizens who are engaged in illegal labor activities in the territory of the Russian Federation can reach 7 million people. As a result of last year alone, more than 35 billion rubles were spent from the state budget for the deportation of illegal immigrants from Russia (and only about 1,2 of thousands of people were caught.)


Deportation money from the budget of the Russian Federation goes not only to purchase tickets for illegal immigrants to the house, but also to establish their personalities, issue numerous protocols, accompanying and entering into a special database relating to the registration of persons with foreign citizenship in our country.

The 35 of thousands of seven million deported amid the voiced seven million is somehow unintelligible, and also eloquently shows how weak our legislation allows us to regulate migration flows - at least those that are sent to Russia from abroad.

The weakness of the legislation was attended by the deputies Sergey Zhigarev (LDPR faction) and Aleksey Zhuravlev (United Russia faction), who decided to urgently correct the situation with the help of new amendments to two laws at once: "On the procedure for leaving the Russian Federation and entering the Russian Federation" and " On the legal status of foreign citizens in the Russian Federation. " The essence of the amendments is to oblige foreign citizens entering the territory of Russia from countries with which we have a visa-free regime to issue a so-called migration bill at the entrance. Registration will not be free. The cost of the bill Zhigarev and Zhuravlev is determined within the average cost of deportation of one illegal migrant - about 30 thousand rubles.

In other words, the deputies of the Lower House are proposing to all citizens, without exception, arriving in Russia, for example, Uzbekistan or Tajikistan, to buy a bill of about one thousand dollars; bill that can be used to pay for the possible deportation of these same citizens, if they will engage in illegal labor activities. The sale of such bills, according to the mentioned deputies from the LDPR faction and United Russia, will bring into the state budget as much 225 billion rubles, and in addition also reduce the criminality caused by the stay of illegal immigrants from foreign countries in the Russian Federation. The deputies argue that if a foreign citizen arriving in Russia leads a, let's say, legal way of life, then on returning these 30 thousand will be returned to him.

After getting acquainted with the amendments that the said deputies are proposing to accept, frankly, the question arises of what kind of world Alexei Zhuravlev and Sergey Zhigarev live in ... If they claim that they live in an objective reality, then they can definitely be doubted. The fact is that the proposed amendments are already a priori divorced from the conditions of the very reality mentioned above. Why? Here are a few facts.

Fact one. It is difficult to imagine a situation in which a person entering Russia in a Dushanbe-Moscow train on the third shelf would have the opportunity to get thousands of rubles from an 30 wallet and post them for a bill of exchange to pay for his deportation. Well, even if we assume that a certain Farukh from the outskirts of Kulyab somehow collected the required amount at home and went with her to Moscow, would he give a lot of money for a Tajik citizen (and for many Russian citizens, by the way, too) money for the purchase of some strange paper. Does he need it? .. Not for that, he climbed onto the third shelf ...

Fact two. The position itself, which can oblige foreign citizens entering Russia without visas, to acquire an 30-thousand bill of value, is strange. The fact is that if a migrant purchased such a bill, is it worth it to be considered illegal after that? Obviously not. What kind of illegal he is, if he bought himself a paper that imposes certain obligations on him ... And if he is not illegal, it means that the Russian treasury will still have to give him the money spent on the purchase of a bill of exchange. And where will these 225 billion rubles for the Russian budget come from? Or first they will take, and then they will have to give back. Hmm ... where's the logic?

The fact that a third. Do millions of foreigners go to Russia to turn into illegal immigrants to pay the Russian state some money? The answer is simple: no! They and with amendments in the form of introduction of rules for the purchase of immigration notes will try to circumvent these rules.

Fact Four. Where will these bills be sold? Is it possible at railway stations when entering Russia or at Russian airports in the arrival sectors ... If so, then the question arises: what to do with a person who says that he simply does not have the necessary amount to buy a bill? In this case, he will either have to be sent back again at public expense, or he may be let in to Russia, having believed in the word that he, as soon as 30 thousand is earned, will buy the bill at once. To believe a word of, say, thousands in five ...

And, perhaps, bills will be sold at stations (stations, airports) of departure to Russia or at Russian embassies and consulates, so then what this bill (if not to count the cost) will differ from the introduction of the visa regime. If the deputies decided to introduce a visa regime with the same Central Asian states, then it would be quite understandable, and so - why make a strange garden, trying to change the concept of a visa with the word “bill of exchange”. And again, at whose expense the deportation will be carried out, if the same average Farukh from Kulyab decides to roll to Russia, and at the border control declare that the bill, "I swear by my mom", is lost on the road ... Or there is hope for incorruptible Tajik border guards and customs? ..

The fact of the fifth. Interestingly, what would the deputies of Zhigarev and Zhuravlev say if they were asked to buy some paper that would guarantee the legality of their presence in the country for the same 1000 USD when entering one of the “visa-free” countries? They say that you will now pay us, and then we will give you back if you keep yourself well with us ... Some strange international relations, isn’t it. It seems to be without a visa, but at the same time, the entrance fee. Attraction, and only.
One thing is a visa - a legitimate document that is legally recognized, and another thing - some derivative visas, creating new prerequisites for corruption.

The fact of the sixth. How to deal with the citizens of the states belonging to the Customs Union? Obviously, the effect of the amendments should not apply to them, but only about this speech, for some reason, until it goes ... Or, we will also start charging money from Belarusians for entering Russia. So daddy will not understand us then.

The fact of the seventh. Let the migrant try, after buying a bill and staying a certain time in Russia, to prove that he worked legally. After all, certain structures will have a clear interest in not returning the money to him when going back.

But if these amendments have so many pitfalls, will they start working? It is highly likely that they will only breed new corruption groups and lead to the emergence of new fraudulent schemes - moreover on the part of our officials at various levels. There are a lot of people who want to heat up their hands on these bills.
With the same success, you can be obliged to buy bills (indulgences), for example, corrupt officials: you bought a bill for 1 million rubles - you can take bribes for this amount. If you did not take it, then the state will return the money to you ...

And if so, then you just have to sit down and think: a visa or not a visa. If not, and not the other, then you get a fabulous Tyani-Push, and it's good if you have two heads ...

Ctrl Enter
Noticed oshЫbku Highlight text and press. Ctrl + Enter
We are
Illegals go on a visit, or What prevents to solve the problem of uncontrolled labor migration in Russia?
Military Reviewin Yandex News
Military Reviewin Google News
145 comments
Information
Dear reader, to leave comments on the publication, you must to register.